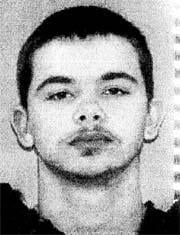 18-year-old Ryan Schallenberger is charged with making a bomb threat.

Students are attending classes at Chesterfield High School today, after one of their classmates was accused of plotting to bomb the building.

Police are on school grounds and metal detectors have been installed to help students and teachers feel more at ease.

Police Chief Randall Lear says officers are trying to keep things as normal as possible by keeping unauthorized people away from the school.

Authorities say 18-year-old Ryan Schallenberger was arrested Saturday after his parents called the police when 10 pounds of ammonium nitrate was delivered to their home in Chesterfield.

Schallenberger is being charged with making a bomb threat.

Lear says a journal Schallenberger kept had detailed plans including maps of the school but no targets were named.

Police also say the teen had an audio tape explaining why he wanted to bomb his school, that he wanted played after his death.

A court hearing for Schallenberger is expected to take place this afternoon.