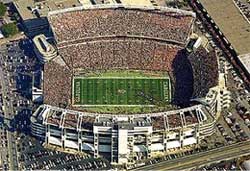 High School football championships will not be played here this year.

South Carolina's high School football teams will no longer play all their championship games in Williams-Brice Stadium.  Most will now head Death Valley for a while.

The South Carolina High School League Executive Committee voted to play 2-A, 3-A, and 4-A title games at Clemson next year.

This will not be the first time Death Valley will host the games.  Northwestern took on Gaffney High for the 4-A Division 1 Title in Clemson in 1992 and, in 1994, Spartanburg took on Dorman there.

The games could be back in Williams-Brice as soon as next December because the decision was only apart of a one-year deal.