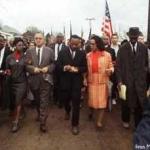 Although he is gone, the legacy of Dr. Martin Luther King Jr. lives on.

Friday marked the 40th anniversary of the assasination of Dr. Martin Luther King Jr.  Remembering what the civil rights hero had done for generations of Americans was at the front of people's minds.

Those who lived through those turbulent times including remembered exactly where they were on the day the fatal shot rang out in Memphis.

"The day Dr. King died, I was a housewife in Columbis, Ohio.  When I heard the news it was really disbelief.  You didn't think that could happen to him because he was such a peaceful person," says Mary Jones-Skinner, Executive Director of the Renaissance Foundation.

Not only do people remember where they were, but how they felt, and how they throught the country would be forever changed.

But he was a man that gave more than just speeches, he also gave inspiration for action.

"He gave everybody hope.  I think it inspired a whole generation of people that they can be Martin Luther King's too and if we could get back to that I think we could change society today," she sayd.

For Skinner-Jones, it was his very last speech that foreshadowed the end of his legacy but also touched the lives of all who heard his words.

"I think that speech inspired me.  It was like he was telling us goodbye in a way."

And while it may have been his final farewell, those who were changed by Martin Luther King Jr. know his legacy will live on.