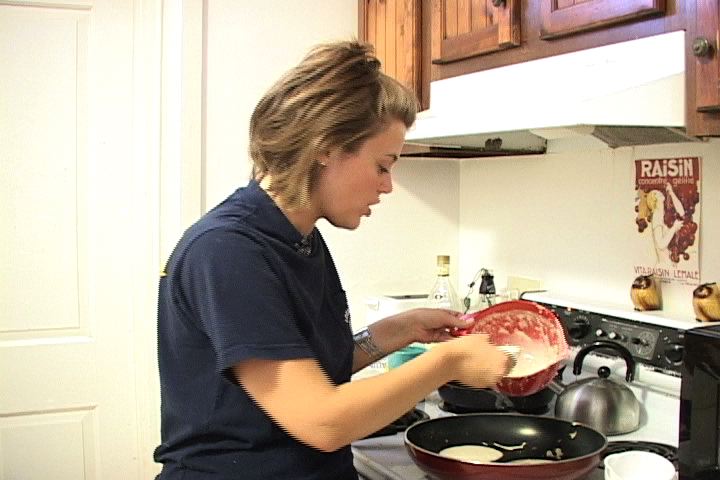 Sizzling frying pan, all the fixings, and blues music. That was the scene in Amanda Kay Seals' apartment on sunday morning. It's all to raise money for her Relay for Life team who walk in memory of her father.

Amanda Kay's father, Phil Seals, passed away last year from liver cancer. She, her mother, and her brother are walking in Relay for Life in his honor.

"Right before he died, he gave about 300 dollars to the baseball team at my brother's high school. When he gave the coach the money he said 'I know there's going to be a kid next year who's going to want to play but can't pay the fees. This is for him," says Amanda Kay Seals about her father.

While some people raise money for their team through letter writing campaigns and donations from friends, Amanda Kay decided to have a celebration in the form of a pancake breakfast.

"I thought everyone would enjoy them the morning after cup," she laughs, pouring more batter onto the frying pan.

For $5, it was an all you can eat and drink pancake breakfast. Friends and sorority sisters of Amanda Kay came out to eat and support her team.

"Anybody who knows anyone who has been affected by cancer understands how important it is for us to support research and doing everything we can to battle these diseases," says her friend, Jonathan Hardin.

"I think my dad's favorite meal was ice cream... at any given time we had 5 flavors... 5 half gallons in the fridge."

Even though pancakes weren't her father's favorite meal, Amanda Kay still thinks her father would be proud of her.