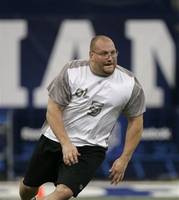 Scouts Inc. projected Benedict as a fourth round pick.

Newberry College offensive lineman Heath Benedict, 24, was found dead in his Jacksonville, Fla. home Wednesday evening.   The Jacksonville Sheriff's Office said there were no signs of foul play and drugs and alcohol were not a factor.

The Jacksonville medical examiner says the cause of his death is unknown and it could be several weeks before it can be determined.

"He was a big, tough man, but had a very gentle heart," Newberry president Mick Zais said. "He was a teddy bear."

A native of the Netherlands, Benedict redshirted at Tennessee in 2002 before transferring to Newberry.

The two-time Little All-American was living in Jacksonville preparing for the NFL draft next month.