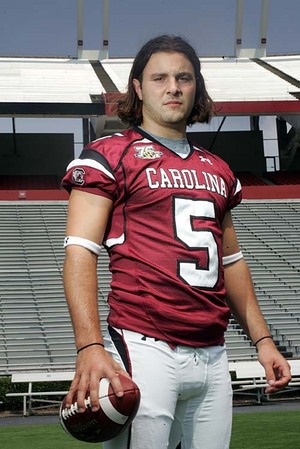 USC's Stephen Garcia is one of seven Gamecock players arrested or cited in 2008.

With more Gamecock football players in legal trouble, including redshirt freshman Stephen Garcia, Carolina fans aren't happy with what they see as a lack of discipline within the program.

"It's frustrating," said fan Hunter Clawson. "It's just another blow to the Gamecocks that we don't need right now."

It's not the first time Garcia has been in trouble, and while he has been suspended until August 15, some say thats not nearly enough.

"This is strike three for him," said The Gamecock sports editor Alex Riley. "If Spurrier was the disciplinarian he says he is, and everyone thinks he is, he should be kicked off the team."

Garcia was cited for underage drinking last Saturday, along with offensive lineman Heath Batchelor and walk-on quarterback Zac Brindise. There have now been seven Gamecock players arrested and/or ticketed in 2008.

Riley says it may just be something Gamecock fans have to get used to.

"Get used to the fact that once a month or so," Riley said. "A player is going to mess up, someone's going to get in trouble with the law. It's going to be a trend."

The rest of the Carolina football team will resume spring practice at 7:15 tonight on the "Proving Grounds" off of Bluff Road.