"Nature Boy" Gets Key to the City - DatelineCarolina

"Nature Boy" Gets Key to the City 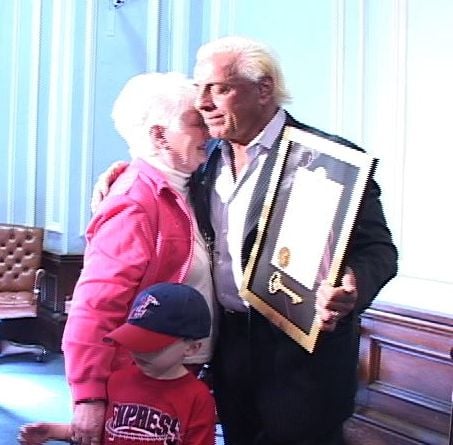 Ric Flair greets fans and gets the key to the city of Columbia.

The "Woo" man was in town Monday to recieve the Key to Columbia. Long-time pro wrestling star Ric Flair appeared at a fan-filled Columbia city hall with his wife Tiffany yesterday, and there wasn't a dry eye in the room.

It was the last scheduled event before Flair will wrestle next weekend in what could be the last match of his 36-year career.  If Flair, known as the "Nature Boy", loses to Shawn Michaels he has agreed to retire.

Mayor Bob Coble declared March 24th "Ric Flair Day" and gave the crowd a big "WOO!", Flair's tradmarked yell as the wrestler took the stage.  With the Key to the city and a day in his honor Flair couldn't hold back his emotions.

"Of all the things I've supposedly accomplished in my career, I'm very proud of...I'm most proud of moments like this," he said.

Flair had tears as he remembered beginning his career wrestling once a week in Columbia.  Fans of all ages lined up to recieve autographs and photos with the Nature Boy and even yelp their own "WOO!"

Flair will wrestle Sunday in the WWE Raw event at the Colonial Center.