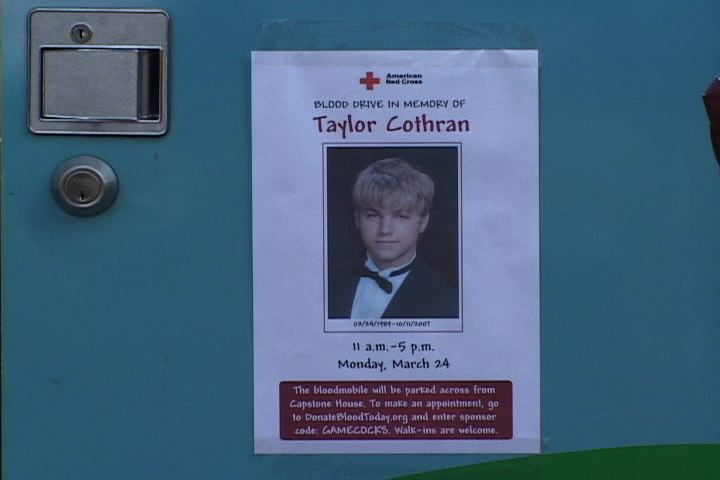 Picture of Taylor Cothran posted on the donation bus

"He was the one that would be there whenever you needed him...someone that you could depend on," said a tearful Teresa Cothran.

She is talking about her son Taylor, who died on October 11, after falling from his fifth floor room at USC's Capstone House.

Taylor needed a lot of blood while he was in the hospital, so Teresa says she understands the importance of blood donations.  She has worked with the Red Cross and USC to set up a blood drive in Taylor's honor.

The drive was successfully held yesterday, on what would have been Taylor's 19th birthday, outside of Capstone.  Teresa says it is hard to come back to the site, but that it is part of her healing process.

"It can destroy you so easily...it's an unimaginable situation but if you can help somebody else, it helps you," she explains.

With the help of friends and family, Teresa hopes to make the drive biannual, with one on his birthday and one during football season.  She says helping others allows her son's positive spirit to live on.