Sushi rolls with the changes - DatelineCarolina 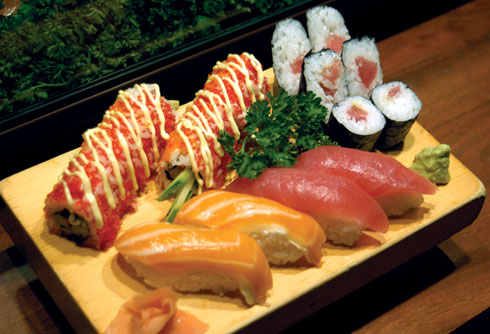 Sushi rolls with the changes 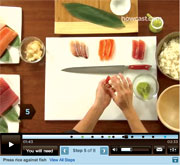 Sushi rolls with the changes

The most important ingredient in sushi isn't fish or rice - it's air.

That's what Shigeharu Kobayashi believes. He helps run Camon's Sushi Bar on Assembly Street downtown. A paneled wooden door slides to reveal a traditional sushi house, from the chefs to the food.

Although an array of hip sushi spots have opened around Columbia in the past several years, sushi is not new to Columbia. Camon's has been slicing fresh sushi since it opened its doors in 1985 as one of the city's original sushi houses.

"We were here before sushi was cool," Kobayashi says. His parents, Shigeru and Shizuko, moved to Columbia and opened the restaurant after a stint at another Japanese one. Shigeru moved here in the 1970s to help start an American version of a Japanese steak house chain. Instead of flying back to Japan after the launch, Shigeru decided to stay and open his own restaurant. Camon's was born.

In the past 23 years of serving sushi, the Kobayashi family has seen an evolution and transformation from the original Japanese dish.

"Back then, people generally preferred simple, small rolled sushi, like cucumber or yellow tail," Kobayashi said. "Now rolls have become busier with more stuff in them, like the California roll." The California roll features avocado, cucumber and imitation crab and is rolled in sesame seeds.

Kobayashi said he has seen an Americanized version of sushi emerge in the past several years.

"As sushi takes on more of a life in America, it becomes more like American cuisine," Kobayashi says. This has led to a more varied menu and the use of untraditional elements.

"The ingredients are different, like the use of cream cheese and smoked salmon," Kobayashi says. "These are flavors the average Japanese sushi eater is not used to."

As the sushi has changed in America, it also has becoming less healthy with the addition of things such as tempura-fried ingredients and Japanese mayonnaise.

Another big difference is the addition of rice on the outside, he says. But now those changes have drifted back across the ocean and are becoming more popular in Japan. Having rice on the outside instead of seaweed gives the chef more options for plating.

This reflects the differences in the philosophies between Japanese cooking and American cooking. In Japan, chefs try to achieve a standard, a norm, he says. In America, chefs like to add their own creativity and flair to the dishes.

The Camon's chefs are trained at the restaurant.

"We like to hire people with little experience but strong work ethic," Kobayashi says. Smaller restaurants, especially family-owned spots, have their own method of making the rice and sauces, which creates a taste unique to the restaurant, he says.

One of the ways to measure the quality of a sushi restaurant is its tamago nigiri, an egg-based sushi. Every restaurant makes it, and each restaurant's will taste different. Chefs have a lot of leeway in creating them, from the amount of air used in preparation to how fluffy it is.