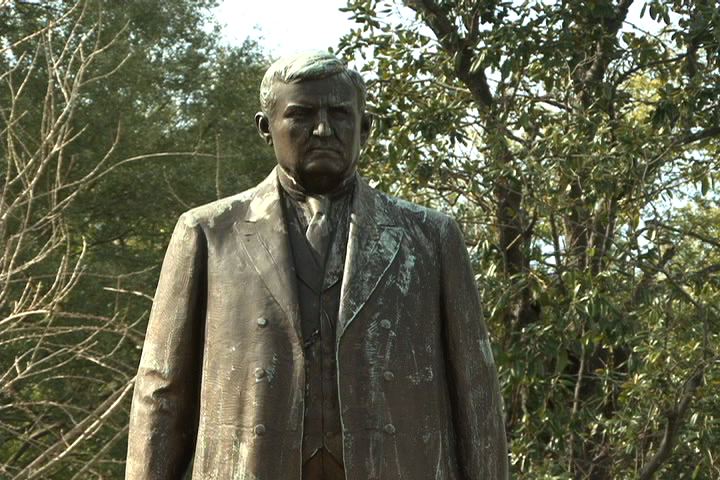 The statue of former South Carolina Governor Ben Tillman on the Statehouse grounds.

A proposal to remove the statue of former South Carolina Governor Ben Tillman from the South Carolina Statehouse grounds has been stirring up controversy. The statue is only one of at least twenty that has information about the person missing. according to State Newspaper columnist John Monk who has spent years reseacrhing subjects.

"He played a major role in bringing segregation to South Carolina. Tillman did deal in the assassination of his enemies during the time of the troubles in South Carolina in the 1870s", says Monk.

Many South Carolinians do not know that there are also other statues at the state house that are hidden reminders to the old segregated south. The Tillman statue is only one of some twenty-four statues with what Monk considers essential information missing.

Dr. J. Marions Sim's statue says he was a "blessing and benefactor of women...empress and slave alike" but it omits the fact that he mutilated female slaves for medical practices.

"[Sims] thought he had found a way of making a name for himself by doing this and he felt [black] women didn't experience pain the way white women did. Therefore he never anesthetized them," says Wendy Brinker who spent more than five years researching Sims' past.

The statue of Sen. Strom Thurmond was changed in 2004 to include his bi-racial daughter; however, it still omits that he ran for president in 1948 on the segregationist Dixiecrat ticket.

South Carolina State Representative Todd Rutherford of Richland County proposed removing the statue from the state house grounds in hopes of showing the other side to a one-sided story.

"Its those people that nobody knows their history whose statues are out there and have the sanitized version on their statue...that's the problem," says Rutherford.

Rutherford plans to have changes made to all of the plaques one statue at a time. Columnist John Monk is still looking for a way to bring South Carolina's dark past to light.