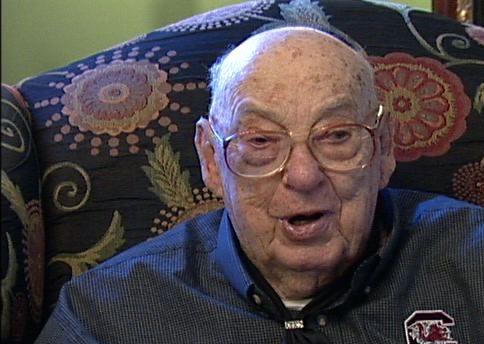 Buck Smith, 97, the oldest living former Gamecock basketball player, has a story to tell that dates back more than half a century ago. He was the captain of the first team to win a conference title for USC.

His age does not hinder his memories of his team and its accomplishments.

"Historically, I am backed up in this belief that those two ball clubs, the '34 and '37 years were probably as far as the wins and loss and national recognition was concerned was probably two of the top teams they ever had at that school."

Buck says that the sports division doesn't have the records to back up what he's saying, but he believes that his team was forgotten about during the era of the legendary Frank McGuire.

The Gamecock basketball team has players in their late teens and twenties, but Buck says that it was a lot different back in the day. Playing basketball in the thirties was different because if you had two absences in a class you had to drop the course. He also thinks that these young guys can't hang.

Buck has great memories of his 1933-34 team. He knows his team was a gem and should never be forgotten about.

"It was a good group of athletes and a damn good ball club and we always had a feeling that is was the best kept secret at Carolina  cause nobody ever talked about them."

Buck will make sure that everyone that comes in contact with him know about his team.