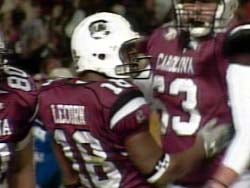 Lecorn had 27 catches for 315 yards and three TDs last year.

According to the incident report, the three admitted to smoking pot after Cayce police responded to a complaint of loud music coming from a car and detected a strong odor.

Lecorn said the marijuana was his, according to the report.   He was released Monday morning from the Lexington County jail on a personal recognizance bond.

Gamecocks coach Steve Spurrier has suspended Lecorn and Clements from the team indefinitely.

Clements is also wanted by the Collier County (Fla.) sheriff's office for a failure to appear bench warrant, but will not be extradited.

Lecorn and Clements are members of the highly-touted recruiting class of 2007.   The wide receiving corps of that class was ranked No. 1 nationally by Rivals.com.