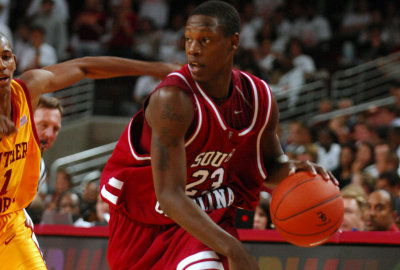 Georgia triumphed over the Gamecock basketball team last night, an 82-64 victory halted the five game Bulldog losing streak.  The Gamecocks record fell to 12-11 with the loss.

Bulldog senior guard Sundiata Gaines scored 27 points and led the way in the first half to a double-digit lead.  The game was decide by halftime.  It was Gaines' second best college career game, he scored 32 points against Florida earlier this year.

The Bulldogs are known as one of the worst shooting teams in the SEC but made 57 percent of their shots in the first period against Carolina.  They outrebounded the Gamcocks 20-14 and made 8 out of 9 foul shots.  The Bulldogs dominated the 3-point ranges making 6 out of the nine shots.

Devan Downey was the leading scorer with 20 points for the Gamecocks, followed by Zam Fredrick with 15.  South Carolina shot a 36 percent before halftime and hit 4 of 18 three-point shots.

Carolina and Georgia split their season series.  The Gamecocks beat Georgia on Jan. 30.

Carolina's next game will be on Feb. 16.  This home game will be against Alabama at 7:00 p.m. at the Koger Center.