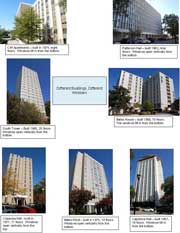 Details of each USC dorm - click below for large version

Related Links:
What other schools do

For more than two years, Lauren Allred's biggest concern with living on the upper floors of the Capstone Residence Hall at the University of South Carolina was a long elevator ride. The 18-story building's height was no big deal, the possibility of falling out of a window as an 18-year-old freshman did in October hardly a thought.

But the resident adviser's 16th floor window now not only frames a beautiful view of Five Points and Shandon, but it also reminds her of Taylor Cothran's Oct. 5 fall from a fifth-floor Capstone window.

Cothran, from Greenville, died six days later. The State Law Enforcement Division is still investigating, but USC spokesman Russ McKinney says the fall appears to have been accidental, and the school is increasing enforcement of its policy that bans lofted or bunked beds in front of windows or placing anything on those windows.

Residence Life Director Andy Fink said Cothran had a bunk bed in front of his window and fell through the window's upper portion, which does not open. Students often use bunks or lofts, which stack or heighten beds, to create space in crowded dorm rooms.

It was the second fatal fall from a high-rise dorm window on campus in the past five years.  In August 2002, freshman Jessica Horton fell to her death from the sixth floor of Patterson Hall. She had climbed out her dorm room window onto a ledge, Fink said.

Freshman Sarah Langdon lives a few doors from the students who found Cothran on the roof of Gibbes Cafeteria, which is part of the Capstone complex, after his fall.

"It was tough for a while because it was so close," she said. "Those people try to stay out of their room as much as possible now."

The university's reaction was almost instantaneous, Allred said. At the request of housing officials, resident advisers inspected all the windows on their floor and told some students to rearrange furniture, she said.

The online version of the loft policy says it was updated Aug. 15, almost two months before Cothran's fall.

However, Fink said the policy, which doubles as a fire‑safety measure, is now "being more strictly enforced." Other policies may be created once SLED's investigation is complete, he said.

"Most people don't use that setup because it blocks out all the light," she said.

No formal study was conducted, but USC moved forward with retrofitting other dorms to limit window openings to 10 or 15 inches, Sherry said. Some dorms, including Capstone, already had restrictors to prevent students from throwing things out windows, Fink said.

"Window safety is definitely a concern in Capstone," said junior Ryan Reddick, a former resident adviser in the building. "Not that people are falling out, but that stuff is falling out."

At the new Honors Dorms, to open next year, windows will open only 10 inches from the top, project architect Scott Garvin said. Deputy Columbia Fire Chief Aubrey Jenkins doesn't see the restrictors as a problem in an emergency. Fire crews probably can't get to any windows above the seventh floor, and below that firefighters would break or dismantle windows, if necessary, he said.

Students at both Capstone and Patterson said they have little concern about window safety because of the restrictors. "You can barely fit your hand out the window," said Tim Metzger, a freshman on Capstone's 12th floor.

On the seventh floor of Patterson, freshman Kait Papa said she doesn't really think about it either.

"The window only opens about 8 inches," she said. "You'd have to get a screwdriver to open it more."

But despite Cothran's death earlier this year, some students still do use tools to open their windows wider - a task as simple as unscrewing the restrictors. On a sunny day, a glance at Capstone or Patterson shows a handful of windows opened much farther than they should go.

So even with the housing office's efforts - summertime maintenance inspections, regular health and safety inspections, window restrictors and new policies - the ultimate safety responsibility still rests with the student.

"For all practical purposes, these are adults," Allred said. "They know that if you fall out of a window on the 16th floor, it's not going to end well for you."