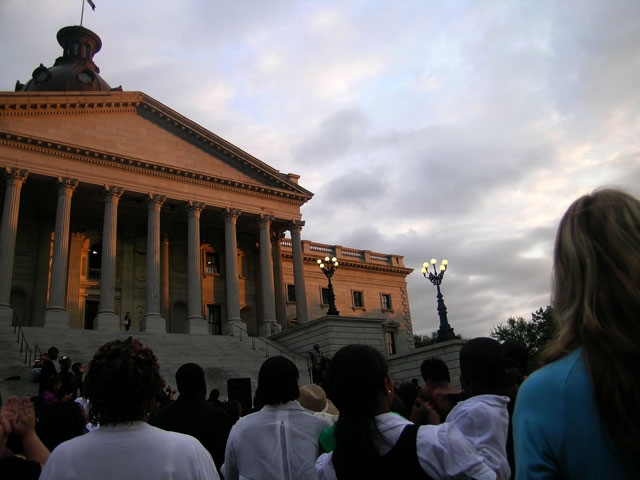 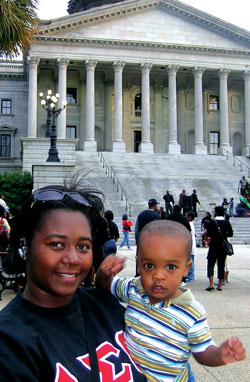 Jennifer McClary attends the Jena Six prayer rally at the State House with her son Justin. McClary said that the situation in Jena, La., strengthened her resolve to become a more involved parent. 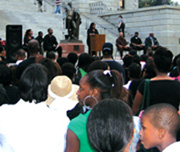 About 800 South Carolina residents rally in support of the Jena Six at the State House.

Columbia residents and community leaders say the significance of the Jena Six extends far beyond the borders of the small Louisiana town.

"It has an impact on everyone across the United States," said I.S. Leevy Johnson, a Columbia attorney. "Injustice in Jena is also injustice in the Midlands."

The case of the Jena Six, a group of six black teenage boys arrested and initially charged in the December beating of a white classmate, has slowly drawn the notice of the entire nation.

Only one of the six was tried and convicted. Mychal Bell's conviction was overturned on Sept. 14 when an appeals court ruled that he should have been tried as a juvenile, not an adult.

The case ended a year of increasing racial tensions in the town that began when nooses were hung from a tree that white students usually sat under at Jena High School. The white students that hung the nooses were suspended but not criminally prosecuted.

On Sept. 20, the day Bell would have been sentenced before his conviction was thrown out, an estimated 15,000 to 20,000 people - including South Carolinians - went to Jena to rally in support of the Jena Six.

Brenda Kneece, executive minister at the S.C. Christian Action Council, agreed that the situation in Jena is relevant to area residents.

"It affects everyone whether they are willing to admit it or not," she said. "Anywhere that injustice is alive, no one's freedom is as secure or safe as we believe."

About 800 people participated in a prayer rally in Columbia Wednesday night on the State House steps, one of several rallies held in the nation this week for the Jena Six.

Many community members said that incidents like those in Jena potentially could happen in the Midlands or other areas of South Carolina.

"Racism is not confined to Jena," said Harry Rogers, who attended the State House rally and has been involved civil rights work since high school.

Johnson said incidents like those in Jena can happen in every city if not actively deterred.

"It has the potential of spreading like wildfire," he said. "No community is immune to injustice."

In Simpsonville earlier this month, vandals burned swastikas and racial slurs onto a golf course green at Holly Tree Country Club. The FBI is investigating to see such actions can be prosecuted as a hate crime.

Though most Midlands residents said that the state over the years has made progress regarding racism and diversity, they stress that there is still work to be done.

Cleveland Sellers, head of the African-American Studies program at the University of South Carolina, said that race relations in South Carolina have gotten better, especially in comparison with other Deep South states.

But he notes there is still a "tremendous" amount of room to improve in the areas of health care access, education, negative imagery and communication.

"It's still difficult for us to discuss the issue of race in mixed company," he said. "We need to increase understanding and communication not only between African-Americans and whites but also Native Americans, Hispanics and all ethnicities."

At the State House rally, Rogers said that the work yet to be done to eradicate inequality in South Carolina would be the hardest to complete.

"We've done away with visible racism," said Rogers, who graduated with the last segregated class from Eau Claire High School. "What's left is the kind that's not so easily seen."

Despite these lingering inequities, community members and leaders remain positive about the future of justice and diversity in the Midlands.

"I believe in people," said Rogers. "If they are educated, they will do the right thing. We need to work hard to educate ourselves."

Rogers suggested that more studies should be done investigating unequal treatment in the legal and criminal justice systems based on race.

Kneece of SCCAC said that individuals are responsible for making a community more diverse. She said the best way to make a difference is to seek out people from different ethnicities, religions and backgrounds in everyday situations.

"Many people play this dance; they don't cross lines, and they are comfortable in the ignorance of their own prejudice."

Kneece admits she was once guilty of this ignorance as well.

"I realized that I lived in a very vanilla world."

So she started cultivating business relationships with people of different races, and she said those relationships have now become friendships.

Jennifer McClary said that the experience of the Jena Six would make her a more involved parent. She said she brought her son Justin to the State House prayer rally to show him that all people deserve equal justice.

"When he's older, I want to let him know that everybody's supposed to be treated equally, even if they're not," she said.

Sellers said that residents that want to prevent events like those in Jena should become more active in schools, politics and community organizations.

Preston Winkler, executive director of the Greater Columbia Community Relations Council, said that today's youth have a major role to play in the progress of race relations in South Carolina.

"I do think that the future is very hopeful," he said. "The young people I have worked with are very optimistic."

The GCCRC sponsors the Columbia Luncheon Club, a "cross-section" of the community that meets monthly for a "frank discussion of race and community concerns."

Sellers said that open, honest communication about current and past conflicts are vital to healthy community relations in South Carolina.

"The Orangeburg Massacre is the litmus test for race relations in this state," said Sellers, who was imprisoned for his involvement in organizing the 1968 protest at South Carolina State University, where three black men were killed when police officers shot into the crowd. "Race relations will always be an issue that we will come back around to until we address what really happened there."

But Sellers said that he thought that Jena would be a "spark," an "epiphany" to help a new generation focus on remaining issues of inequality in the Midlands and across the country.

"Folks have to put on their marching shoes, organize themselves, set priorities and understand the sacrifices necessary for equality," he said.