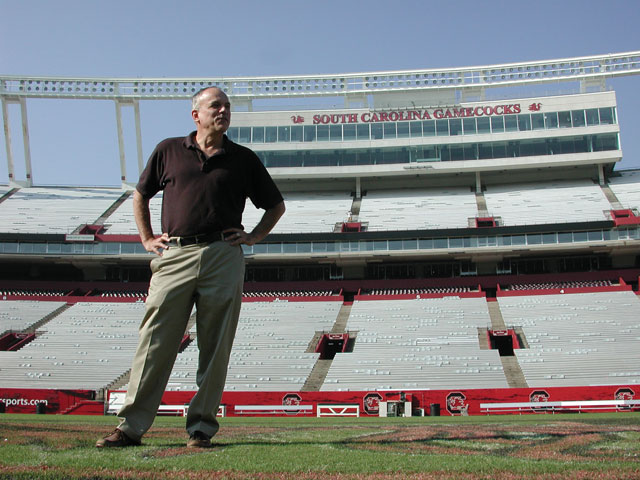 The University of South Carolina's first mascot, "The Rooster," still roams the halls of the Coker Life Science Building, but he doesn't wear his feathers anymore.

John Nelson, now a biology professor, spent his junior and senior years in Columbia behind the rooster's mask because USC didn't have a mascot before the 1971-1972 basketball season.

"There was one game someone dressed up in a chicken costume," Nelson says. "I saw it only that one time. We needed someone at every game, not just one game."

Nelson says he thought the only way a mascot would be accepted was by talking to the cheerleaders, because they could get him into the games.

The cheerleaders were unsure, he says. They didn't know if Nelson would do anything crazy at the games, but they agreed to let Nelson audition anyway.

So, over winter break in 1971, Nelson's mother spent a week making a Gamecock costume. It had fabric feathers, a cardboard bill and spurs fashioned from Styrofoam with elastic silver cloth over them.

"I had special footwear," he says. Nelson used yellow knee socks and fingers from yellow kitchen gloves that he attached to his feet, three fingers in the front and one pointing back to mimic a bird's foot. The cheerleaders burst out laughing at the first sight of the costume, but Nelson officially got the job.

"Cocky had it big, born with lightning and smoke," Nelson says. "I didn't have the clout. I didn't have a name. I was just there. I just walked into the Coliseum. It was so scary to walk in there."

But Nelson also quickly learned that his mask had the special powers of anonymity. He lived in Preston dormitory on Greene Street, and on basketball game days he put the suit on in his room and walked to the Carolina Coliseum, about four blocks away, amusing those who passed by him.

"When you're incognito, you can get away with things," he says.

John Herr taught Nelson advanced biology while Nelson was a USC student, but he says it wasn't until a few years ago that he learned that his former student - and now colleague - was The Rooster. Herr is professor emeritus and endowment chairman of the A.C. Moore Herbarium, where Nelson is now curator.

"We wouldn't have had Big Spur or Cocky if somebody didn't have the idea for a Gamecock mascot," Herr said.

Nelson's antics as The Rooster became popular with fans at home games, especially when he would interact with other mascots. He remembers a basketball game against Davidson College where he and the Davidson Wildcat played one-on-one during halftime.

"No one could score," Nelson says. "His head was too big. The crowd loved it."

Sometimes The Rooster's follies were too much for other mascots to take.

Nelson traveled with the basketball team to the first few rounds of the NCAA tournament in March 1972. The Gamecocks were up against the Temple Owls.

"The owl's outfit was cooler than mine because his feathers were real," Nelson says, so he chased Temple's mascot around the court, pulling the owl's feathers.

The owl finally got mad and confronted him, Nelson says. Words were exchanged.

"No one could tell what we were saying," he says. "It looked like we were having a chat."

USC won the game and advanced in the tournament, but the season ended against North Carolina in the Sweet 16.

Before the 1972 football game at Death Valley against Clemson, Nelson walked on the field with Clemson fans booing him and danced on the tiger paw in the center of the field.

"I was filled with craziness, jumping up and down, screaming," he says.

Clemson's tiger mascot came over to Nelson and told him to apologize. But, Nelson says, "Patrolmen told him to get on his side and leave me alone."

Nelson graduated in the spring of 1973 and went to Clemson for his master's degree in science but says he was "always a Gamecock fan."

While still at Clemson, he came back to USC as The Rooster the following fall to make an appearance at the Gamecocks' football game against the Tigers. As the Gamecocks were getting ready to score, a Tiger fan threw what Nelson describes as "three cupfuls of ice" at the Rooster.

Nelson says he saw it, dodged the ice and pulled his tail up and mooned the fan.

Nelson says he wanted to start a tradition. It worked.

In the late 1970s, Big Spur emerged on the scene, and in 1980, Cocky was born. Cocky won the Universal Cheerleading Association Mascot Competition in 1986 and 1994 and was the 2003 Capital One National Mascot of the Year.

"Maybe I had something to do with it. It might be my greatest accomplishment as a USC person," Nelson says.