They call him the Chicken Man - DatelineCarolina

They call him the Chicken Man 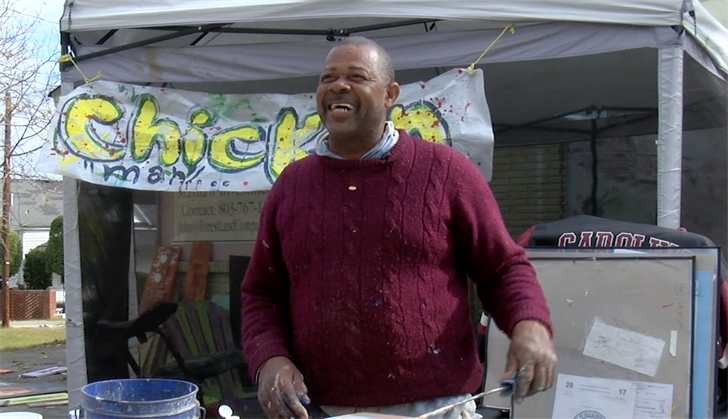 Ernest Lee is happy he makes a living off of his passion. 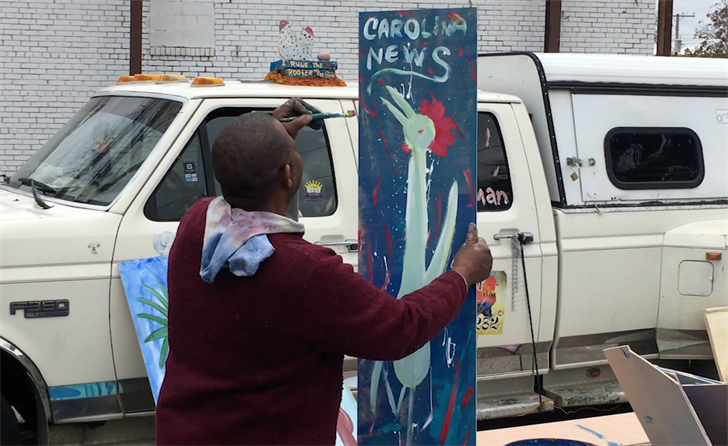 Ernest Lee combines his unique chicken style and Carolina News into one work of art.

Most Columbia natives know him as the Chicken Man; but his real name is Ernest Lee. He is the local artist superstar who has been creating unique works of art in downtown Columbia for the last 17 years.

His nickname name says it all, his artistic niche the slender chicken designs that have helped him reach the level of success he claims now.

"There's nothing like it anywhere," Lee said. "I been all over the Southeast and I'm the only one who does it like this and that's why the people love it."

He's made his name on the painted feathered fowl, and his location in the middle of Gamecock country seem to be a match made in heaven, although he didn't plan it that way.

In 1982, Lee was enjoying breakfast with a friend in Augusta Georgia, when his friend suggested that he began "focusing on and painting things that [he] owns."  Lee owned a large number of chickens, and thought they would be interesting to paint but he was worried no one would buy his work.

"I really thought that people would see the chickens and say "well, that's not interesting, that's not fun, them is just chickens," Lee said. He wasn't going to paint them, but he ended up taking what he called a leap of faith.

"I decided to start painting the chickens and.and it just felt right. I added my own flavor to it, my own style, and to my surprise people took a liking to it."

He lived in Florida, and would sell his artwork there for the next ten years before moving to Columbia following his divorce.

"The chickens were never supposed to be related to the Gamecocks, but when I got here, they accepted it as a Gamecock because we're in Gamecock territory," Lee said. And by 2001, only two years later, he had sold over 400 works of art around Columbia and South Carolina.

He believes that the leap of faith was one of the most significant decisions of his life, and he's proud to be a well recognized and celebrated artist. "Wherever I go, they say, "There go the chicken man!" Lee said, "and I love it because that means they love my work."

He is hoping that he will continue to paint chickens in the shed on Gervais street for many years to come.