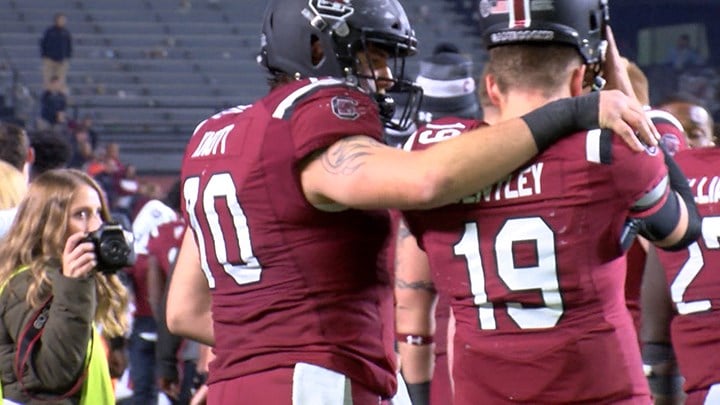 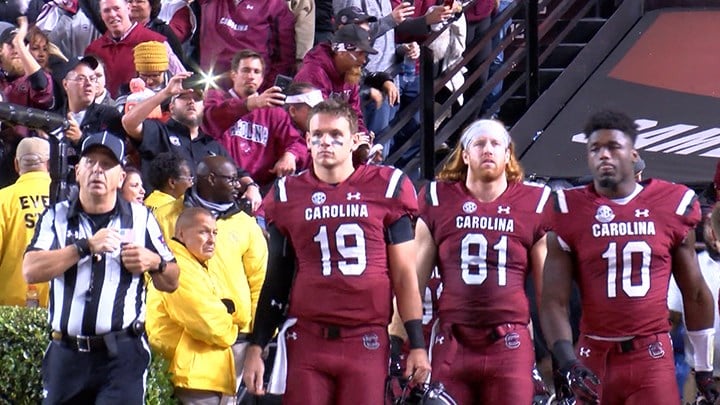 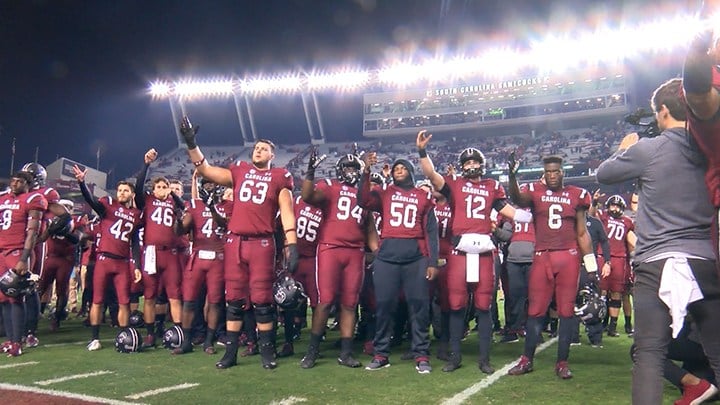 The football team singing the alma mater one final time at home this season.

After a brutal 56-7 loss to their rival last season, South Carolina has had the motto “never again” for the past year as they tried to erase that harsh memory Saturday night. But for the fourth consecutive season, the Clemson Tigers are bringing the Palmetto Bowl trophy back to Death Valley as they defeated the Gamecocks 34-10 in the regular season finale.

“We just got beat,” Head Coach Will Muschamp said. “You can’t beat yourself against a good football team. We had too many self-inflected issues that caused issues for us. We had nine penalties for the first time — we had nine penalties in four or five games combined. Disappointed in the showing.”

Not a lot went well for South Carolina in this contest, starting with the offense. On just the Gamecocks’ second drive of the night, Jake Bentley overthrew right into the hands of Clemson’s Ryan Carter, who ran it back for a touchdown. This was the first time the Gamecocks allowed a touchdown off a turnover all season, as they allowed just twelve points off turnovers.

“At the end of the day, I throw the ball, and I got to be responsible for every pass that I throw,” Bentley said about the interception. “That’s 100 percent on me and I just got to be better.”

Bentley threw another interception in the third and passed a mere 126 yards. The Gamecocks finished with just 207 yards of total offense, but the difference maker was the defense.

South Carolina outplayed the Tigers early, despite the interception. At the end of the first, the Gamecocks hadn’t allowed an offensive touchdown and led in rushing and passing yards, time of possession and third down conversions. But from that point on it was Clemson’s game, and they finished with 469 offensive yards. The South Carolina defense also had nine penalties for 76 yards, something very uncharacteristic for this team.

“I feel like, on the defensive side, we hurt ourselves throughout the game on penalties,” defensive lineman Taylor Stallworth said. “It’s all about getting smarter and making smarter plays.”

The Gamecocks were held scoreless until the fourth quarter. Parker White made a 40-yard field goal, and later Bentley found Bryan Edwards for a 38-yard touchdown catch.

In a weekend full of upsets, South Carolina had the chance to join in on the fun - No 9. Auburn beat No. 1 Alabama just hours before kickoff, and unranked Pitt beat No. 2 Miami Friday. South Carolina also had the chance to erase a similar memory from earlier in the season; a night game against a team they’ve struggled with in the past and an electric atmosphere in Williams-Brice. That was the home opener, where they lost 23-13 to Kentucky. All of these opportunities, and the Gamecocks just could not get it done.

South Carolina finishes the regular season 8-4 and will now await its bowl game fate. The team is ready to get back to work and is excited about getting in a good bowl game.

“Our focus now is getting better and preparing for our bowl game wherever it may be," Bentley said.

Bowl announcements will come on Dec. 3.