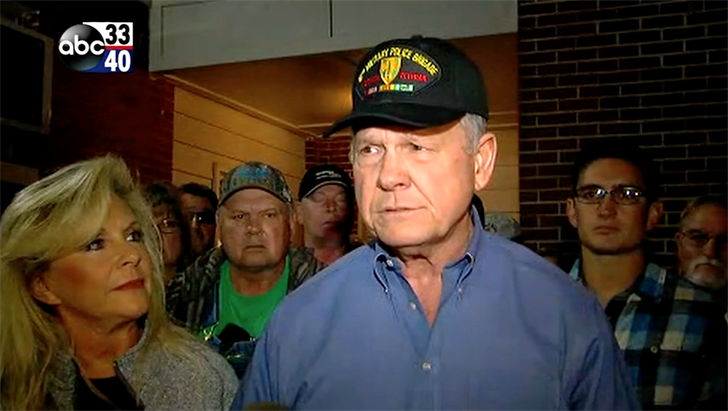 South Carolina politicians speak out against Roy Moore — Allen Devlin
Another woman has stepped forward and accused Roy Moore of sexual assault; but Moore continues to stand firm in denial. But now Republican politicians from around the country are beginning to suggest he step aside in the race for the Alabama Senate seat.

The new accuser, Beverly Young Nelson, said in a press conference Monday that she was assaulted by Moore when she was 16 and he was in his 30’s. She recounted the events, saying that they left a restaurant together. Instead of driving her home like she thought Moore would, he pulled behind the restaurant and parked the car in the dark between two dumpsters; he then began to grope her.

Along with the national trend of Republican politicians denouncing their endorsements of Moore, both Republican senators from South Carolina also suggested that Moore exit the senate race in wake of these new allegations.

Senator Tim Scoot said Sunday on CBS news that he believes the accusations are stronger than the denial, and that Roy Moore should step down not just for the republican party, but for the American people as well.

Senator Lindsey Graham took to twitter, and said “In light of the most recent allegations and the cumulative effect of others, I believe [Roy Moore] would be doing himself, the state, the GOP, and the country a service by stepping aside. If he continues, this will not end well for Mr. Moore.”

There are less than 30 days left in the Alabama senate race, and Roy Moore has shown no plans of stepping down.

Beginning in January 2018, travelers will need either a passport or a Real I.D. in order to get past airport security, for both domestic and international flights.

“Real I.D. was passed in 2005 by the US Congress as a result of the 9/11 commission’s recommendation to standardize how states issue drivers licenses and identification cards,” according to Lauren Phillips, strategic communications chief for the SCDOT.

The Real I.D. will allow you to board a commercial flight, enter a federal building and visit a military installation, while your current S.C. ID will still allow you to drive, vote, receive federal benefits and access hospitals. South Carolinians aren’t required to apply for a Real I.D., but Phillips says there they may want to.

“If people don’t want to carry around their passport when not traveling internationally, they may want to switch to a real I.D.," she said.

While the IDs will be available in the first quarter of next year, the date to remember is Oct. 1, 2020.

“South Carolina residents must have either a Real SC I.D. or another federally approved identification such as a passport or military I.D.,” says Phillips.

Visit the SCDMV website for more information on Real I.D.

Rivalry on and off the field — Jacqueline Lawson
Monday kicked off the start of the 33rd Annual Carolina/Clemson Blood Battle; a week that helps students get more involved in the in-state rivalry while giving back. The American Red Cross has hosted the event in South Carolina and it has grown into one of the biggest blood drives in the state.

Libby Wright, an American Red Cross account manager, explained why the blood drive is so important.

"Blood is like medicine. It cannot be manufactured. In America we can make just about anything, but we can't make blood," she said.

The blood donation process is quick and easy, and the doctors and nurses work hard to make patients feel as comfortable as possible. Students could donate in the Russell House Ballroom everyday from 10 a.m. - 7 p.m. or in any of the vans spread out around campus until Nov. 17.

While the focus is on giving back, it is fun to spark a little competition in everyone. Gabby Colapietro, student vice president of the blood drive, said, "We just need as many people to come donate as possible. Just think about it as saving lives, helping us out and also beating Clemson. You don't want to lose to Clemson twice."

Wright doesn't care whether people came for the free t-shirt, free food or just because it is what their friends were doing, just as long as they are helping others and helping the Gamecocks.

"We love the huge response that we have from students here," she said. "It's amazing. We appreciate it, and USC is having a huge impact on the patients in our hospitals."

What is even more surprising is that this will be only the third shop in the country with primarily female technicians.

The goal is to make every customer feel like they are making informed decisions and feel comfortable in the auto shop. She said, “We can show customers this and ultimately still say this is what we found now you make a decision.”