Will Steve Bannon play a role in 2018 gubernatorial politics? - DatelineCarolina

Will Steve Bannon play a role in 2018 gubernatorial politics? 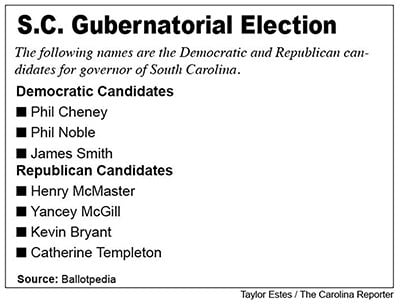 Political science professor Shikre Sabbagha has some advice for South Carolina gubernatorial candidates: Be wary of teaming up with Steve Bannon, the former chief strategist for President Trump.

“Steve Bannon’s speech is a protest itself to the Republican party,” Sabbagha, a Midlands Tech professor, said. “Or at least I would bet the alt-right would think so.”

Bannon was the guest speaker at the Citadel's Republican Society annual Patriot Dinner Nov. 10. The three gubernatorial hopefuls- Gov. Henry McMaster, Mount Pleasant attorney Catherine Templeton and Lt. Gov. Kevin Bryant  - all made a public effort to flatter Bannon before and after he gave his speech.

"For Bannon, congratulations, that’s great. Especially if candidates start seeing him as a king-maker,” said Sabbath  who also teaches American government. “He was helped by the dinner and the flattery of the gubernatorial candidates. It made it look like you have to give homage to Bannon to get an advantage.”

Bannon’s appearance in Charleston follows a declaration he made in October. At the annual Values Voter Summit in Washington D.C., Bannon declared a “season of war on the GOP establishment."

Since his statement made at the Values Voter Summit, Bannon has been flying around the country and endorsing anti-establishment politicians in GOP races.

“Steve Bannon is a higher-level thinker,” Templeton said in a radio interview in October regarding Bannon’s invitation to the Citadel dinner. “I applaud Steve Bannon for being the voice for the rest of us.”

At the end of Bannon’s speech, McMaster came on stage to shake hands with the former White House advisor. “No one did more to get Trump elected than Bannon,” McMaster said to the crowd.

President Trump has endorsed to McMaster in the gubernatorial election, returning McMaster's strong endorsement during the 2016 presidential race. But it is yet to be seen if the presence of all three candidates at the Patriot’s dinner will persuade Bannon to pick a candidate to endorse.