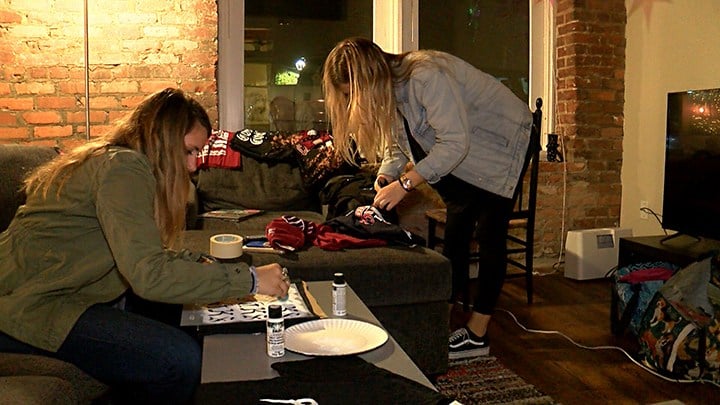 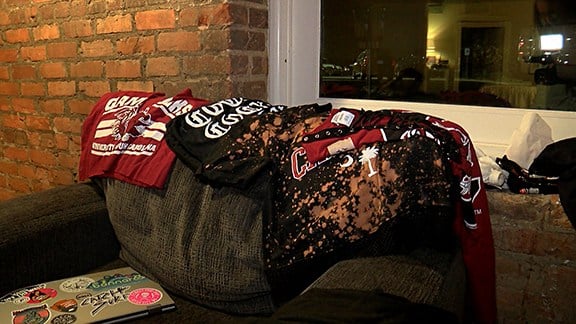 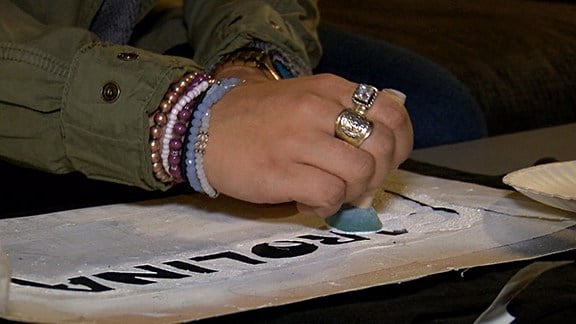 Bianca Pirone works on transferring a custom graphic to a T-shirt.

When Anna Grace Averett came to the University of South Carolina, she felt a little bit of culture shock on game days.

“The little black dresses, and like, cowboy boots were fun freshman year,” Averett said. “But then I was just kind of like, uh, it’s not really our style.”

So Averett partnered with her friend Bianca Pirone to make customized T-shirts. They began by buying t-shirts sold at local college bookstores. The two students then bleached and cut holes in t-shirts give them a distressed look. Averett and Pirone also transformed the simple t-shirts into lace-up or zip-up tops.

Averett had always been invested in the fashion world. In high school, she enrolled in a program at the career and technology center in her hometown where she spent three fourths of her school days working to create a fashion collection. Averett also met Pirone through the program.

Two years ago, Pirone decided to transfer from Arizona State to USC, and the two friends began discussing how to make an impact on students there the following fall.

“We decided to make shirts for ourselves, and then we were, like, there is a pretty big interest that people wanted to buy them,” Averett said.

Pirone and Averett started an Instagram account called Sew College to spread their creations with other students. While the T-shirts were intended for William’s Brice tailgates, they sold their first shirt to an North Carolina State student. From that first sale, business took off.  Sew College once sold 90 shirts in a month.

“I brought my sewing machine down to school to maybe fix a couple things here and there, not for an entire business,” Pirone said.

With this popularity came the challenge of meeting demands.

“We would be buying so many, and we would need them in like small and medium, and they would only have like (size) 3X left, and we would start running out of shirts," Averett said. "And so there are days that we would spend hours just running around Columbia just trying to find shirts.”

To combat the problem, Pirone and Averett began to create custom graphics for their T-shirts this fall. They also began to expand beyond the lace-up style shirts to crop top and tube top styles.

The other obstacle the students faced was balancing their schoolwork with a growing business. They have worked until 5 a.m. before in order to complete orders for customers on time.

“Sometimes 20 orders come in, and we’ve already promised them to do it, and so we’re just like chickens with their heads cut off trying to sew this,” Averett said.

Instagram has played a huge role in the business. Pirone says she uses the app as a research tool for new T-shirt ideas.

“I go on the Instagram page all the time, you know, the explore page, and I find out what are other girls wearing across the United States,” Pirone said.

The app also is key to a business model that the two students say would only work for their customer base. Sew College does not have a website. Instead, all orders are conducted through Instagram messages, and most customers pay using Venmo.

“Free advertising, everybody can see it,” Pirone said. “People will tag their friends in the comments, like ‘Here is where I got my shirt.”

Pirone and Averett see their work paying off on game days. From far away at tailgates, they are able to see T-shirts that they’ve made all over the parking lots.

“That’s so rewarding, because they’re rocking, they’re having a good time at a tailgate and we’re like, ‘Yeah that’s us. Like we helped you, like, look great,’” Pirone said.

The last home game of the season, however, will mark the last set of orders for Sew College. Pirone will be studying abroad next semester and Averett will be graduating.