Be The Match, USC students team up to register others for bone m - DatelineCarolina 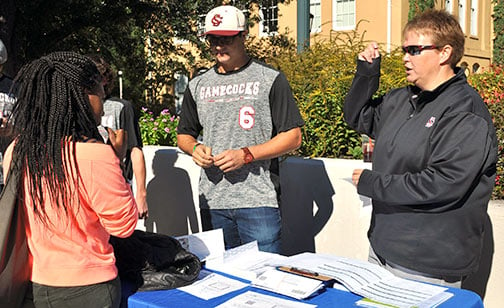 Be The Match, USC students team up to register others for bone marrow registry 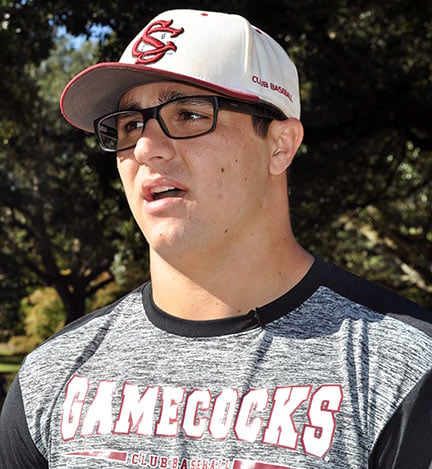 USC student Miles Moody says he and his recipient have formed a fast friendship in the year since his bone marrow donation and plan to meet early 2018. 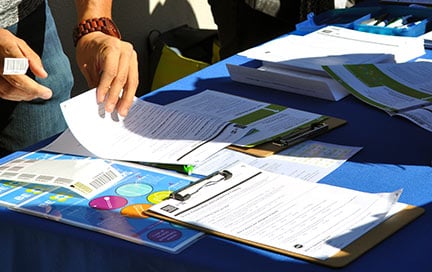 Signing up for the Be The Match bone marrow registry involves filling out a questionnaire and swabbing the inside of both cheeks. 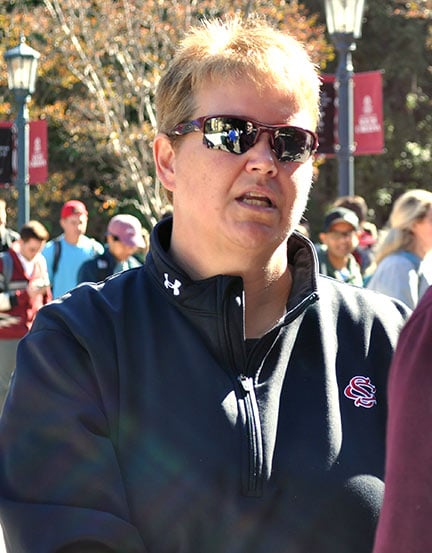 Ashley Collier said working with Be The Match is the perfect combination of her medical and nonprofit backgrounds.

Ashley Collier asked this question to students crossing the Pickens Street bridge. She and members of USC’s club baseball team urged students to join the Be The Match bone marrow registry and possibly donate bone marrow to help people with blood diseases or cancer.

Collier, senior community engagement manager for Be The Match in South Carolina, said 45,000 USC students signed up last year. The organization sets up tables around campus a couple of times a month.

“I love interacting with college students and showing them the impact they can make in the world,” she said.

Miles Moody, a senior criminology student, knows first hand the impact the registry can have on people’s lives. He signed up to be a donor after a baseball practice a year and a half ago thinking with the 1-in-430 odds he wouldn’t be chosen. A month later he got a call.

“It just happened that I was able to be a match for somebody, and it worked out for the best,” he said.

After additional tests to make sure he was healthy enough, Moody donated on July 20, 2016. Instead of the surgery he was worried about, Moody underwent the nonsurgical peripheral blood stem cell procedure, which takes blood out of one arm, filters the cells out and puts the blood back in through the other arm.

“It’s just literally like giving blood so it seemed really easy so I thought why not give it a shot,” he said.

Matthew Warren, a senior global supply chain operations management student, underwent the other donation method: a surgical procedure where bone marrow was extracted directly from his hip. Like Moody, Warren never expected to actually donate, and while he was nervous about the procedure he said Be The Match did everything to make it as painless a process as possible.

“I’m always down to help somebody that’s really in need,” he said, “and I realized after I did it how much it could actually help somebody.”

“The band is fantastic because they're large numbers and they're also a very diverse group of members,” Collier said.

Collier said college students between 18 and 24 years old are the number one type of donor they're looking for because they're young and healthy. However, she acknowledges that joining the registry is not for everyone.

“It's a lot to think about at a young age, especially if you're that 18 to 24 years of age,” she said. “You don't know where you're going to be years from now.”

But Adrianna Martinez, a sophomore biology student who was just walking by the table and said the sign up process was easy and fast, is not worried about what signing up entails.

“I'm pretty confident if I do have to do this. I know what I'm signing up for,” she said.

And even though Moody never expected to donate, he said the experience is one of the best things that happened.

“I don't think I’ve ever had really a dull moment since then,” he said. “It’s just always been uplifting.”

Carolina News reporter Rashaan Anderson takes a closer look at the sign up process for the Be The Match registry.