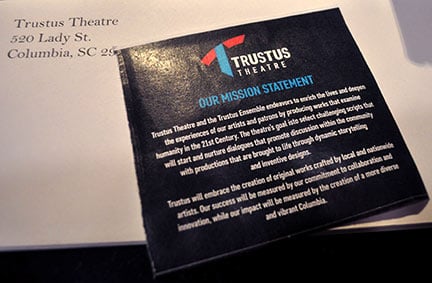 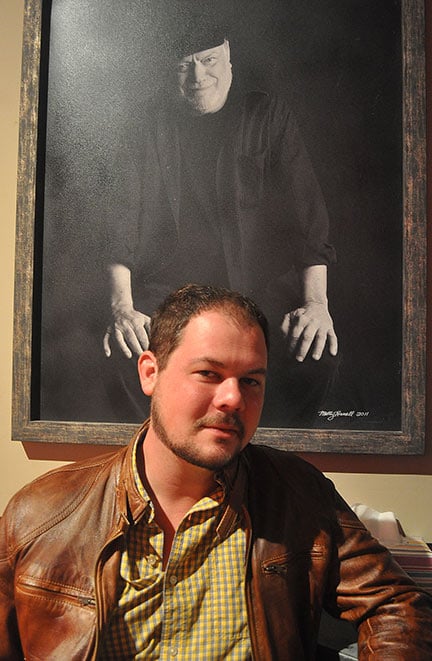 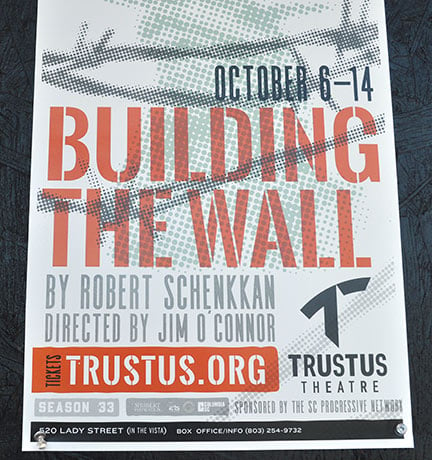 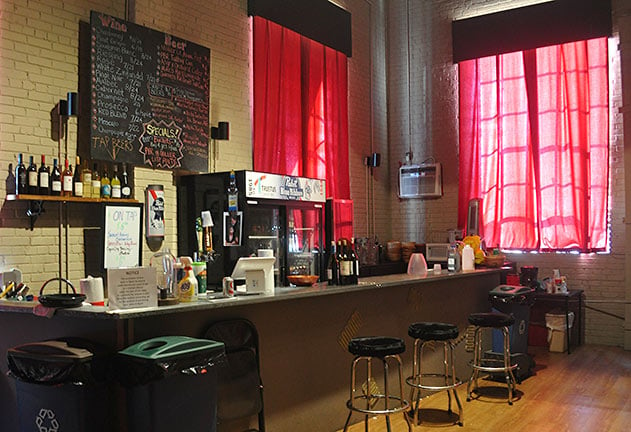 Trustus Theatre allows patrons to bring their drinks from the bar back to their seats during the shows and provides free popcorn for their mainstage shows. 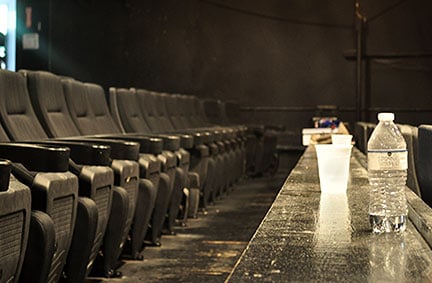 Artistic director Chad Henderson says the reclining movie theater style seats with cup holders make Trustus a very comfortable theater to reward the patrons who chose coming to the theater over going to the movies or watching Netflix all night. 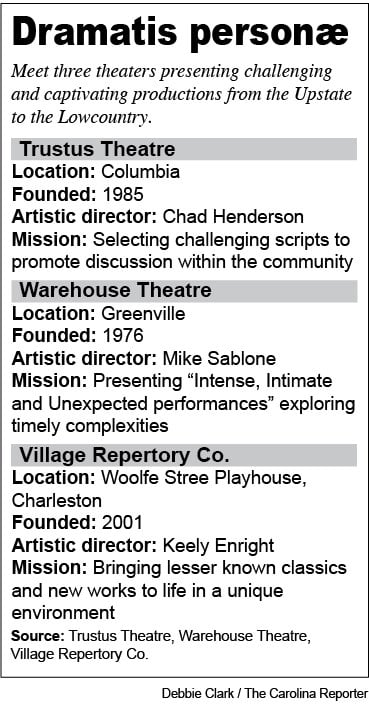 When Jim and Kay Thigpen founded Columbia’s Trustus Theatre 33 years ago, they had the radical notion that the city was hungry for contemporary theater. They were right.

Now, Trustus and other playhouses across the state provide settings where theatergoers can settle in to be challenged, informed and sometimes shocked, into thinking of critical issues of the day.

Trustus Theater’s mission has been evolving since 1985, but artistic director Chad Henderson said the one constant has been creative and contemporary work that tries to speak to current issues.

Jim Thigpen died in August, but Henderson said the theater’s — and Thigpen’s — legacy has become clearer in recent years: “Our theater is your theater.”

“We really try to make it a place that's a safe place to explore the personal and the political,” said Henderson, who came to Trustus in 2007 after Thigpen brought him on as marketing director right out of college.

He characterizes a typical Trustus production as “topical; it's a little fearless and it's celebrating the work of actors.” While there’s a lot of variance in a Trustus show, Henderson said what audiences are sure to get are shows that haven’t been produced often and may not be a household name.

“But, just like the name of the theater, trust us; we want people to be able to trust us that these shows are valuable to them,” Henderson said.

Trustus not only wants to satisfy the community’s hunger for watching but also to offer real conversation about the play they just watched. Each show this season has a “talk back,” a mainstay of regional and professional theaters where audiences can discuss the show with not only the actors and director but also experts in the field.

“We are trying to start a conversation at least once per show here in the building,” Henderson said.

Warehouse Theatre in Greenville is also in the business of promoting conversation.

Before a show opens, managing director Jason Johnson said they assemble a panel around the play’s theme and then invite the audience to have an open and honest dialogue.

“If it's something that is a theme or topic that feels like it's an issue that needs to have solutions fostered for it, then it's our goal in those forums to start presenting some solutions, at least solutions for discussion,” Johnson said.

Like Trustus, Warehouse Theatre is community-driven. Johnson said they not only want their shows to be entertaining but they also want everything they do to have positive ramifications.

“We want them to create these ripples that help our community deal with issues they're facing, questions they're facing and ways to support and explore what’s going on,” he said.

While Henderson calls Warehouse a “sister theater” to Trustus and Johnson says they enjoy an “open door with them of support,” the two theaters chart their own paths. Trustus holds an annual playwrights festival, and Johnson said it’s been several years since they’ve built a local play from the ground up.

Up-close theater in an upscale town

A theater company in Charleston shares this mission of producing established works in a new and innovative way, but takes a slightly different approach.

Keely Enright founded the Village Repertory Co. in 2001 with the mission of producing contemporary and new works with an emphasis on performing “up close” classics of the 20th century.

“We wanted to do bigger plays in a way that the audience is really right there with you,” she said.

For Enright, putting a classic play in a cabaret, in-your-face environment makes the work more palpable and moving for the audience.

Enright said she tries to make seasons diverse and different while taking the temperature of the community.

The Village Repertory Co. hosts talk backs when a production calls for it. When the company put on a play about Alzheimer's and dementia, organizers brought in caregivers and experts alongside the actors because so many audience members had first-hand experience in caring for afflicted elders.

When the company’s teenage troupe puts on the musical “Heathers” in January, Enright said they will have a discussion focused on suicide prevention and mental health.

For the three theaters, making emotional connections among their audiences and the productions is the guiding principle.

“You’re going to come away, and I hope it's going to have moved you on a level beyond ‘that was nice,’” Enright said.

Johnson said everyone at Warehouse Theatre buys into the mission statement of helping their community address issues they’re facing.

“If we start veering off of that, we’ll call each other out,” he said.

Henderson comes back to theater’s historic role of a place where people come together to understand life and the human experience through stories. He said there's something powerful in sharing that experience with the other people in the audience.

“It certainly doesn't give us answers, but it gives us something to start a conversation which can lead to some meaningful experiences for people,” he said.