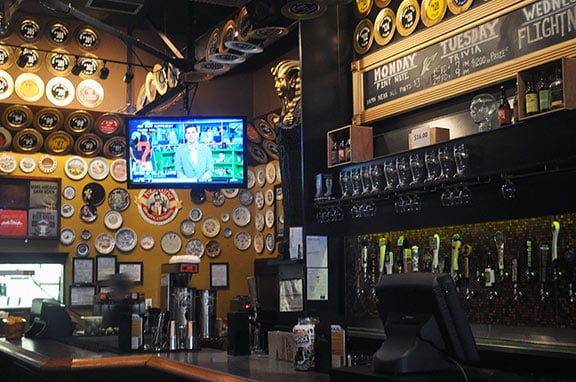 The Flying Saucer, a restaurant in Columbia, is remaining neutral in regards to the NFL protest and will play whatever games their customers are interested in watching. 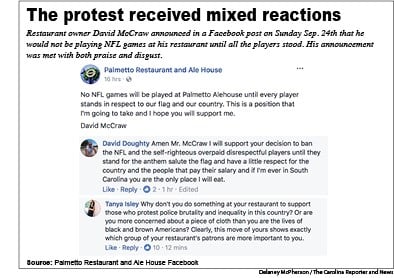 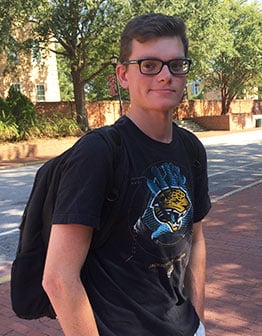 University of South Carolina student and football fan Dan Schorr doesn't agree with the NFL players taking a knee, but he thinks it is a poor business decision for a restaurant to stop playing the games.

By Caroline Davenport and Delaney McPherson
CAROLINA REPORTER AND NEWS

In the wake of President Trump’s call for NFL owners to fire players who kneel during the playing of the national anthem, at least one Columbia restaurant manager said she wants to remain out of the fray so that her customers can enjoy games without controversy.

In Greenville, the owner of Palmetto Restaurant and Ale House chose a different path and said it hasn't hurt his business.

In a now deleted Facebook post, David McCraw said “no NFL games will be played at Palmetto Alehouse until every player stands in respect to our flag and our country.” A restaurant owner in Louisiana decided not to show the Saints game for the same reason, later releasing a statement in response to the owner’s decision.

While McCraw deleted his original post, he made a new one praising the Dallas Cowboys for their decision last Monday to kneel before the anthem, but stand with arms interlocked while the anthem played.

According to a comment on the new Facebook post, however, the day after the original post was made was the restaurant’s best Monday of the entire year. McCraw continued his protest Sunday advertising "Sunday Funday without the NFL" and gave away free t-shirts to his first 50 customers.

A week after the initial protests, most NFL players have returned to standing, albeit with arms locked or fists raised.