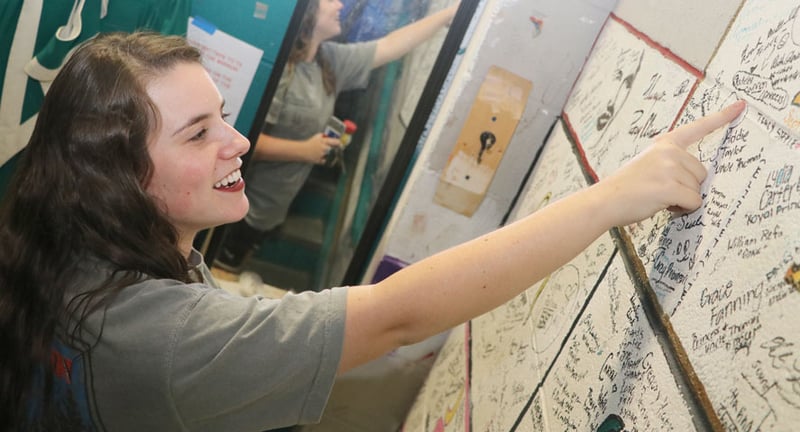 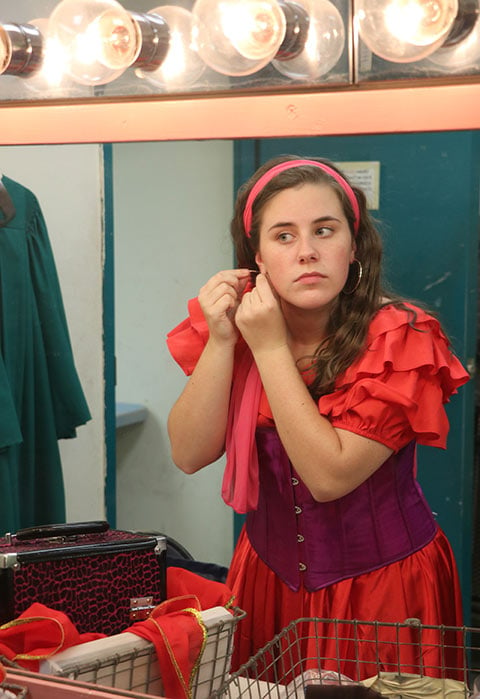 Blakelee Cannon, a sophomore public relations student at the University of South Carolina, says balancing classwork with performing is difficult, but it has helped her better manage her time. 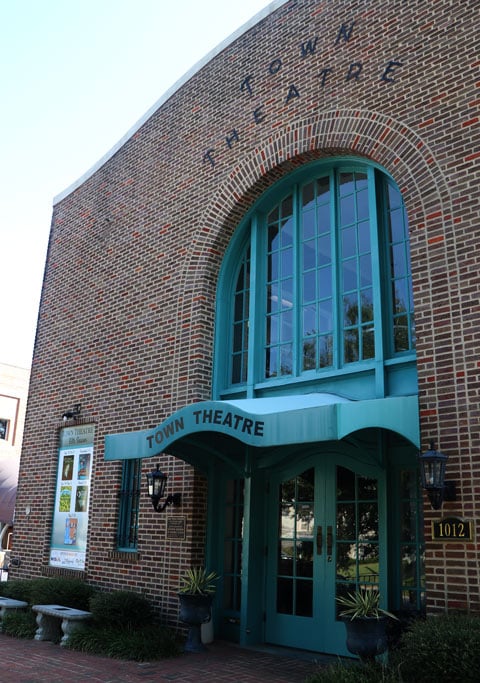 The Town Theatre was established in 1919 by the Columbia Stage Society. "Hunchback" has never been performed on its stage. 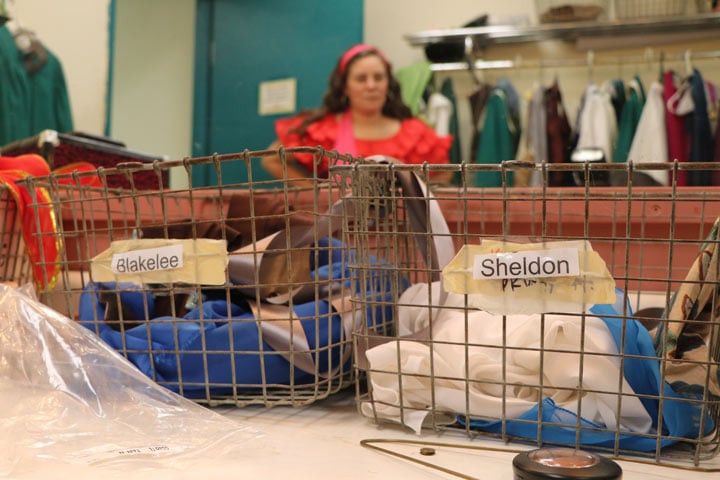 Blakelee Cannon and Sheldon Pascal, a theater and dramatic arts masters student, are both playing the role of Esmeralda. Cannon says the different perspectives make their performances stronger. 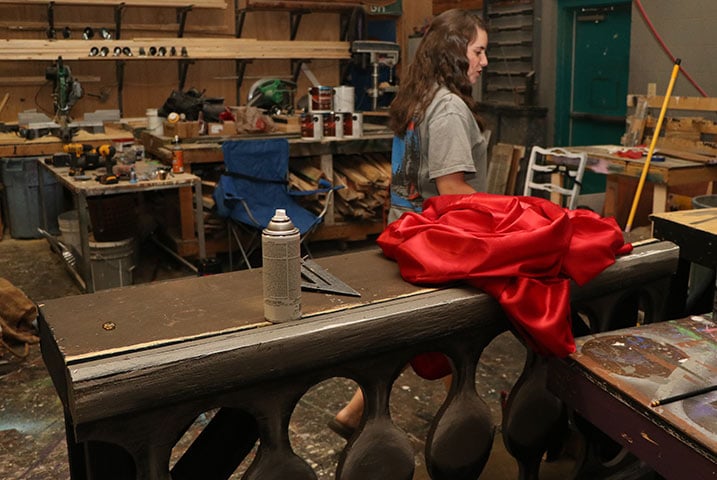 Blakelee Cannon says the music drew her to this musical, and the song she performs with Jeremy Reasoner's Quasimodo on one of these railings never fails to give her chills. 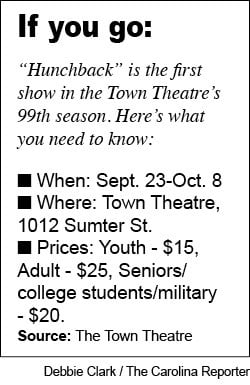 In the stairwell behind the stage at the Town Theatre, Blakelee Cannon finds her name on the cinder block wall. She signed the wall almost 10 years ago along with her other cast mates in “The King and I” after her first regular season production with the theater. Now, she passes that signature from the past every time she makes her way to the dressing room to prepare for her latest role: Esmeralda in the Town Theatre’s production of “The Hunchback of Notre Dame.”

Cannon is a Disney fan, so she was already familiar with the 1996 Disney movie version of the story. Since she was in the Disney mindset, she expected a happy ending when she watched productions of this musical version on YouTube. But she was shocked to discover this adaptation is much darker. The songs she knew were there, along with many new ones, but the storyline — especially the ending — is much closer to the original Victor Hugo novel.

Shannon Scruggs, the executive director of the Town Theatre, says that while she rates this production as PG-13, she describes the show as “heartbreakingly beautiful” and compares it to “Les Miserables” — another Victor Hugo story that found much more acclaim as a musical than its shorter predecessor.

“Kids who do theater will love it; kids who don’t do theater may look at their mom and go ‘why did you bring me to this?’” she said.

The show opened Sept. 22 and will run until Oct. 8. Scruggs said while “Hunchback” is a different type of show for the theater — it’s not a “jump up and down, flying acrobats kind of a show” — it is a fitting opener for Town Theatre’s 99th season.

“Nothing that we are doing [this season] has ever been seen on our stage before — which is pretty great for 99,” she said.

The Town Theatre was begun in 1919 as a place for members of the community to produce and watch plays and musicals. Now, the theater mainly stages big name classic Broadway musicals with one straight play a season, along with children’s theater productions. Scruggs says they consider themselves a family-friendly theater but still like to put together a season with enough variety to keep their members engaged.

“It really is a community effort,” Scruggs said, “and it has been that way since the inception of the theater.”

Every audition is open to local actors and members of the community, and both the backstage crew and front of house crew are entirely made up of volunteers. People come back year after year — including Scruggs, who started performing when she was 8 years old. Cannon says a theater of volunteers creates an environment where “you know that everyone who is here genuinely wants to be there.” Instead of coworkers, each show’s cast and crew is almost like family.

“People that you do shows with, you never forget them,” Cannon said.

Now a sophomore public relations student at USC, Cannon started performing at the Town Theatre when her family moved to Columbia when she was in fifth grade. Scruggs actually directed her when she played Zaneeta Shinn in “The Music Man." The same director who directed Cannon’s first children's theater performance, Jamie Harrington, is now directing her in “Hunchback.”

“She’s watched me grow up and helped me develop as an actor,” Cannon said.

While she doesn’t perform every year and has worked with other theaters, like Workshop Theatre and Columbia Children’s Theater, the atmosphere and people always bring Cannon back to Town.

“There’s not a moment when I am watching the show that I am not engaged and just completely in awe of what’s going on.” — Blakelee Cannon

But while the theater strives to be family-friendly, “Hunchback” is a far cry from “The Music Man.” Cannon says that she has never done anything as dramatic as this show, and Esmeralda is a demanding role for her. She has to prepare herself mentally, physically and emotionally for the things that happen to her character, specifically an attempted sexual assault at the hands of archdeacon Claude Frollo in the second act.

“It has changed the way I view acting,” she says of the experience, “and it’s also given me a great respect for actors who are on Broadway who have to do this stuff eight nights a week.”

Cannon says in real life, actor George Dinsmore is the opposite of his character, Claude Frollo. Where Frollo is the bigoted and dangerously repressed archdeacon of Notre Dame who obsesses over and attempts to rape Esmeralda, Dinsmore is a “big, comedic personality.” They rehearsed the scene enough times to make sure both were comfortable with what’s going on, and Cannon said their “jokey, back and forth” relationship made it easier for her to be comfortable.

“I completely trust George and vice versa,” she said.

Onstage it’s all business, and it takes Cannon a second to get in a mental space to live out the fear and distress and anguish her character goes through. But she says the first thing she does when she gets offstage after the most demanding scenes is smile.

“I’ve got to take a deep breath and then smile because I’ve just got to train my mind to not get in that mindset,” she said.

So what is it about “Hunchback” that drew Scruggs and the theater’s board of directors to it?

Alan Menken’s sweeping orchestration and Stephen Schwartz’s emotional lyrics combine for a powerhouse of sound, and Town Theatre is relying on four instrumentalists — percussion, keyboard, flute and trumpet — and vocalists from USC choirs to bring the score to life. Scruggs said they worked hard to get enough musicians for the choral pieces, and Cannon seems to think they’ve succeeded.

“There is honestly something about the visual of Notre Dame and then this angelic choir music in the back that is, I mean, it gives me chills talking about it,” she said.

There are many moments in the show that give Cannon chills, and most of them are due to Jeremy Reasoner’s performance as Quasimodo, the titular hunchback of Notre Dame.

“There’s not a moment when I am watching the show that I am not engaged and just completely in awe of what’s going on,” she said.

Cannon encourages audiences to pay attention to the gargoyles in the background because, while they're not the blatant comic relief of the Disney movie, they are all dedicated to their roles and have the “coolest and cutest” movements.

“In the middle of this dark show, they add some light,” she said.

Scruggs says audiences should allow themselves to be swept away by the music and story since both audiences and actors use the theater as a two-and-a-half hour escape. But Cannon hopes that audiences leave the Town Theatre thinking about “Hunchback”’s theme of acceptance and the way they treat others.

“I think this show really encourages people to embrace the beauty in other people and respect what makes others different,” she said.

She feels like this is a timely story for the Town Theatre to do, and while audiences might leave sad, they will definitely be thinking about how this show compares to what’s going on in the world today.

“Having something that encourages a love for all people is really special,” she said.