Taylor Moore spoke with a friend walking alone from Five Points the night of the armed robbery to make sure she was safe. 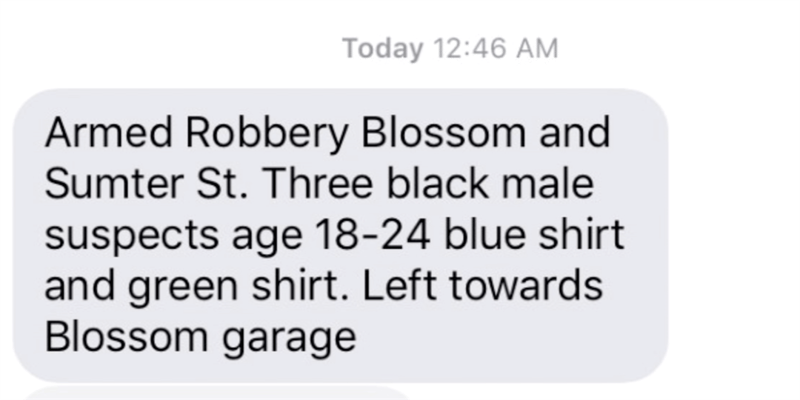 A Carolina Alert was sent out to USC students, faculty, and staff notifying them of the robbery and suspect location.

USC and Columbia police are still investigating two armed robberies that took place on campus over the weekend.

The victim of Friday night's armed robbery told investigators three men approached him as he was walking down Blossom street at approximately 11:50 p.m. He says they demanded that he give up his book bag. The victim says one of the men showed him a handgun. The victim said the book bag contained a laptop, cell phone, and a debit card.

A Carolina Alert was sent out explaining the possible ages of the suspects and short descriptions of their clothing. The suspects were said to have fled through the blossom street garage. Authorities later stated that the suspects were not believed to be in the area.

USC student Taylor Moore lives next to the location of where the armed robbery took place. She spoke with a friend that same night who was walking home alone from Five Points. Moore was worried for not only her safety but for the safety of her friend who had walked alone.

"She actually got back right before it happened, and she said 'Yea, I walked here by myself', and she's like 95 pounds," says Moore.

Sunday night, police say two black males with dreads were involved in another armed robbery. The incident took place on Blossom and Barnwell street. The two men fled in a black Dodge Charger towards Blossom and Lauren street. Further details of the robbery have yet to be uncovered.

USC police urges students not to walk alone at night and to notify authorities if they notice any unusual activity.