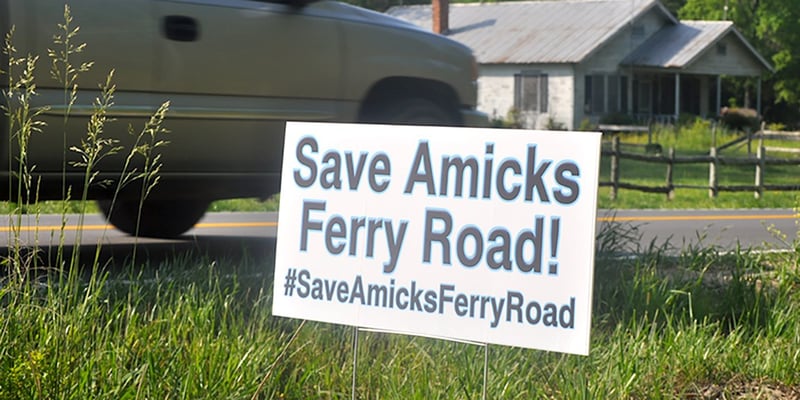 Josh Hayes has lived on Amicks Ferry Road in Chapin his whole life. He now believes the road and its residents are in serious jeopardy now that a new school has been planned just up the road from his home.

“It’s a classic case of the government ruining something that’s always been good,” Hayes, 37, said. “There’s not enough infrastructure out here to support a school.”

The proposed Lexington-Richland District 5 elementary school on Amicks Ferry Road has been met with heated opposition.

“They are trying to develop and push more residents into a place that can’t hold any more people,” Hayes said.

The school district insists that the board has taken only preliminary steps. The project faces a number of hurdles, including rezoning of property, before the district could proceed.

“No plans are final yet, and it may be several years before anything happens,” Katrina Goggins, director of communications for Lexington-Richland District 5 said.

The proposed school has created a movement. A public group on Facebook, “Save Amicks Ferry Road” and its members have sprung into action. The group, created by Chapin resident Charli Wessinger, has started an Internet petition that has been signed by 554 people at last count.

The group’s Facebook wall is filled with complaints. One resident writes: “It’s time for the community to slow this!!! Chapin cannot support another school!!!!”

Amicks Ferry Road is one of the main arteries into the town of Chapin. The road is home to a new housing development, which means more children in the school system.

The road is a two-lane highway that experienced major repairs just last year, when the shoulders of the two lanes were widened.

“It was awful,” said Samantha Smith, who has lived at the top of the road for five years. “It made my five-minute commute to work turn into a 30-minute commute.”

A 2015 SCDOT study found that approximately 8,700 cars travel down Amicks Ferry Road each day. Construction of the school could cause more delays than the recent road widening project. This could spell frustration for the many residents that inhabit the road.

“It’s bound to be an absolute nightmare,” Hayes said. “I don’t understand why the town’s government is trying to turn Chapin into some kind of big city.”

The next step in the process of the school will come during a rezoning meeting May 9 at the Lexington County Council in Lexington. The “Save Amicks Ferry Road” group is urging residents of the road to voice their opinion.

“It’s the only way we can prevent this atrocity from happening,” said Hayes.