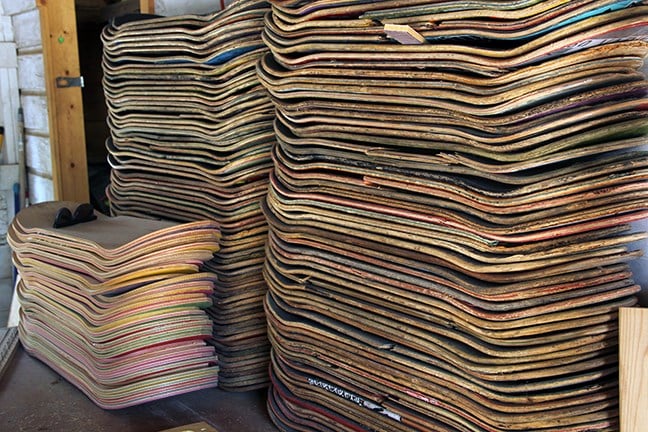 Reaves works a piece on the lathe. His machine rotates the wood to be shaved and formed.

A special order of beer tap handles made of the "skatewood" are ready for more sanding and polishing. This unique design is headed for a bar in Charlotte. 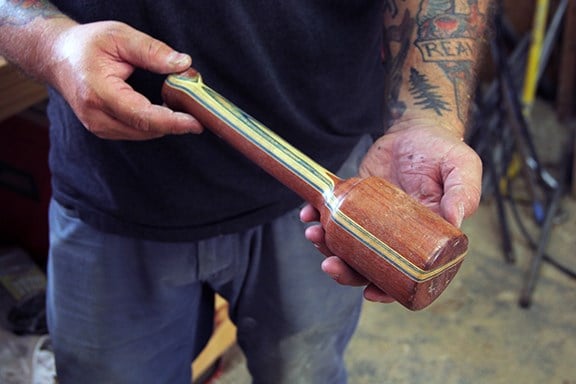 This piece from Reaves' personal collection is a small club made from a board pressed between two pieces of mahogany wood. 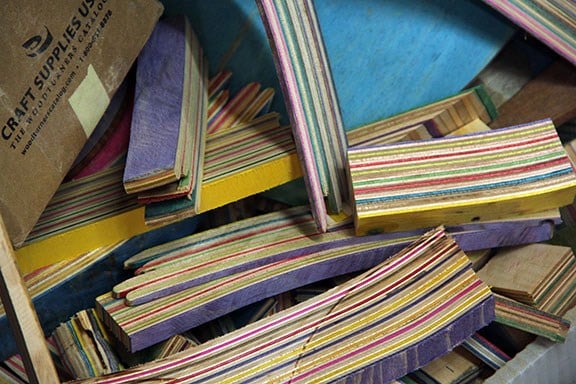 Colorful scraps of the "skatewood" lay in a box. Reaves is influenced by Japanese artist Haroshi who uses recycled boards to make sculptures of art and his friend, George Rocha, who started Iris Skateboards. 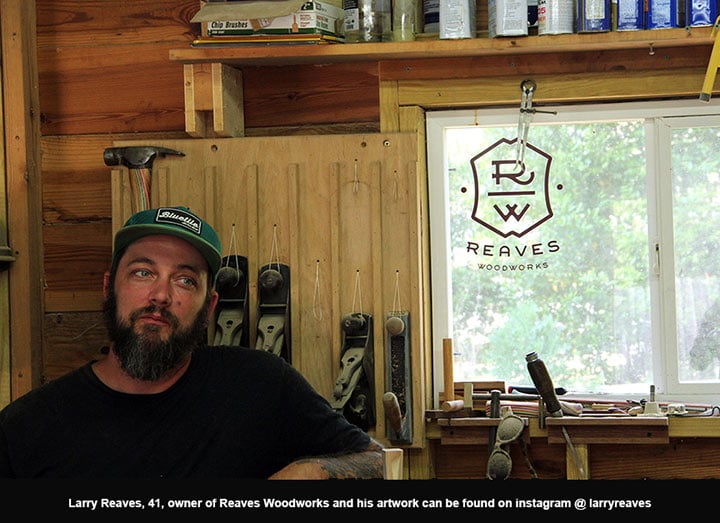 Larry Reaves: between the layers

The act - and art - of skateboarding is open to interpretation and those who practice it believe they can do anything their bodies and minds are capable of expressing.

Professional skateboarder Marc Johnson said it best: “I had this idea, if you think of something, you can do it. You know, skateboarding is ideas that are put in action. I mean, every time you do a trick it's mostly in your head and your body is just responding to what your head is telling it what to do. You can do any trick if you really want to, if you put your mind to it and try it long enough. if you can think of it, you can pretty much do it on a skateboard.”

Larry Reaves, 41, has expanded on those possibilities, taking two different schools of thought on form and function and blending them to create beautiful crafted pieces from old skateboards.

I like making useful items, not so much something that sits on the shelf.

A standard skateboard deck is comprised of seven individually glued layers of maple wood that are pressed together.

In the skateboard world, boards come and go. Just by the nature of skateboarding, boards are used and abused. They’re bound to be scratched, cracked, and snapped over time. Most decks get thrown away or go in the pit at your friend’s next bonfire.

Reaves grants these battered boards a second chance to shine by combining his craft of woodworking and his 31 years of skateboarding to create beautiful, and functional, pieces of art.

Reaves, 41, has been practicing carpentry for eight years, but many of his woodworking skills were honed over the years as a skateboarder who built his own ramps.

Reaves makes everything from knife handles to beer tap handles using “skatewood,” as Reaves calls it. He said he has been influenced in his work by Japanese artist Haroshi and George Rocha, founder of Iris Skateboards, a company that makes new boards out of old ones.

The process starts with getting the grip tape off the top of the board. Reaves’ secret is leaving the boards out in the sun for 20 minutes so the glue weakens and the top of the grip layer loosens, leaving some residue.

“You just use solar power and it comes right off,” Reaves said.

He then takes a palm sander with coarse sandpaper and sands off the graphics on the bottom along with the remains of the glue from the griptape.

Reaves says depending on the project he is working on for a client, he will ask them to supply him with a deck of their own giving it a personal, sentimental feel.

The next step in the process is shaving the “skatewood” into strips and gluing them in different shapes and patterns to create a work of art. The number of boards used for a project depends on the size and nature of it. This is where the table or band saws and the lathe come in to cut and shape a piece.

For those who aren’t carpenters, a lathe, by definition, is a machine for shaping a piece of material, such as wood or metal, by rotating it rapidly along its axis while pressing a fixed cutting or abrading tool against it.

The finishing touches include sanding down the piece once for a smooth texture and if desired, adding a coat of varnish to create a shiny, polished look.

Reaves’ company, Reaves Woodworks, has gained exposure in the past year with the help of social media sites such as Instagram.

“That’s funny, like my Instagram has gotten pretty popular in the past year and so I get a lot of those DIY crafter people that follow me and they’re just like ‘how do get your veneers that color’ and ‘how do you make all those lines in your products,’" Reaves said, "and I’m like ‘It’s a recycled skateboard, did you not read the description of what I'm posting?

"So that’s pretty funny to see people not dumbfounded, but just like ohhhhhhh, okay I understand now but yeah, it’s a trip to see non-skateboarders,,, their take and also their appreciation,” Reaves said.

Reaves says the appreciation of the skateboard community is such a boost to his business. Transworld Skateboard Magazine gave him a shoutout on Instagram and overnight, Reaves gained thousands of followers. Reaves currently has 12,200 followers and always has projects going on.

With the support of nearby local skateshops ranging from Charleston to Charlotte, Reaves has plenty of used boards to keep up with the supply and demand of his products.

“Then last holiday season, just trying to batch out bunches of screwdrivers and knives and some like that, I think I did 30 knives, 40 cutting boards, and then assorted hand tools,” Reaves said, “Last holiday season was a killer for us.”

Reaves does normal carpenter jobs building tabletops, stairs, porches as well as still being on call for information technology work, which he did before starting his woodworking shop.

The father of three says he’s the happiest he’s ever been doing what he loves to do while earning a living for his family.

"I like making useful items, not so much something that sits on the shelf."