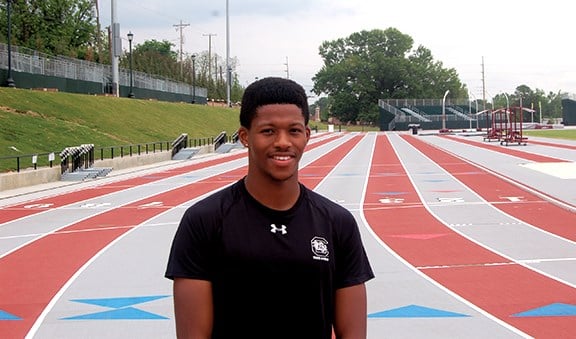 Titi’s time of 20.14 seconds puts him in the lead for the NCAA outdoor track championship and ranked him third in the world.

“I felt good, I felt really good, you know you can kind of feel it,” Titi said.

After his high school career in 2011, Titi stopped training for a while, but wanted to go to an American school to run track.

“I was looking for a school and I was trying to talk to a couple schools and nothing was concrete so I was pretty frustrated," Titi said.

Titi said he spoke to Coach Kevin Brown of South Carolina about joining the team and liked the coach’s laid back attitude.

“He was, you know, very nonchalant about it and he was like, nah, you can come in here whatever and I started training here and I started running fast and I started bettering my PRs (personal records) beyond what he expected and he said, ‘“no, no, let’s do it, let’s do it right now.”

Titi hasn’t disappointed since he was given his chance.

Titi’s career with USC started in spring of 2015. He previously trained rigorously with Akani Simbine and Clarence Munyai in South Africa, the two sprinters who hold the world’s number one and two positions for fastest times in the 200-meter.

Titi said he wants to continue his career by staying consistent and furthering his goals in terms of sprinting.