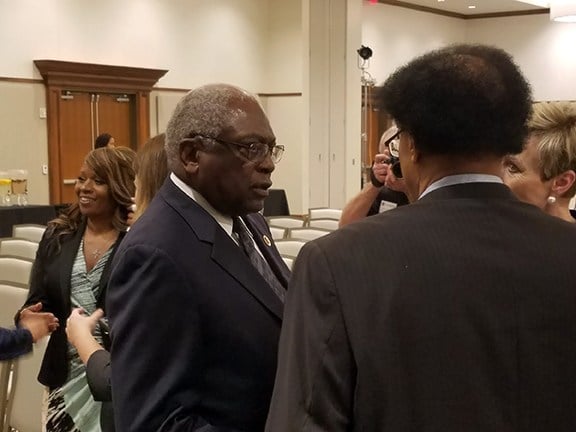 “We need to cure this health care problem,” Congressman James E. Clyburn said. “And to do this, we have to put aside our differences and prejudices.”

“We need to cure this health care problem,” the Sixth District congressman said at the 10th annual James E. Clyburn Health Disparities Lecture at the University of South Carolina. “And to do this, we have to put aside our differences and prejudices.”

Clyburn’s statement followed a lecture given by keynote speaker, Natalie Burke, the president and CEO of CommonHealth ACTION, Natalie Burke. The lecture was chiefly concerned with how political, racial and gender biases prevent social progress and what could be done to combat them.

“Stepping outside of your echo chamber is a daunting thing,” she said. “But steel sharpens steel. When we only talk and work with people who agree with us, we are never as good as we could be and never accomplish what we could accomplish.”

Clyburn, the only Democrat in the state’s congressional delegation, has previously expressed a willingness to work with Republicans. In March, he told Politico that he was willing to support and collaborate on Trump’s future tax reforms so long as they didn’t disproportionately favor the “investor class.” And despite only having voted in line with Trump’s position 9.1 percent of the time, Clyburn still says that he is trying for bipartisanship.

“When we set aside our differences, good things are accomplished,” he said while shaking hands following the lecture’s conclusion.

The lecture series was established by USC to honor Clyburn for his work in encouraging more equitable health care for all Americans.