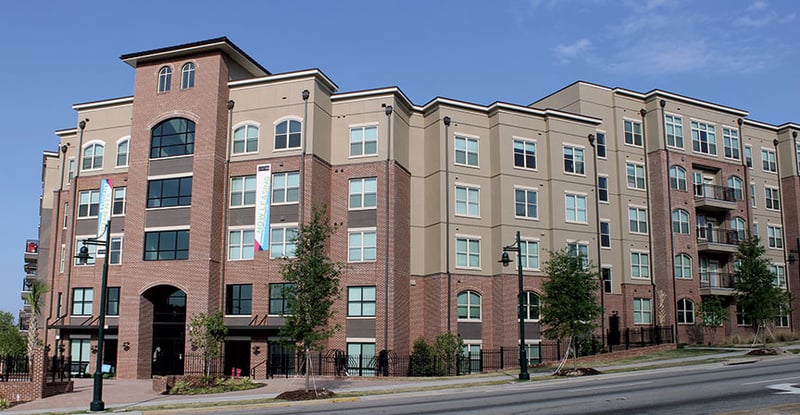 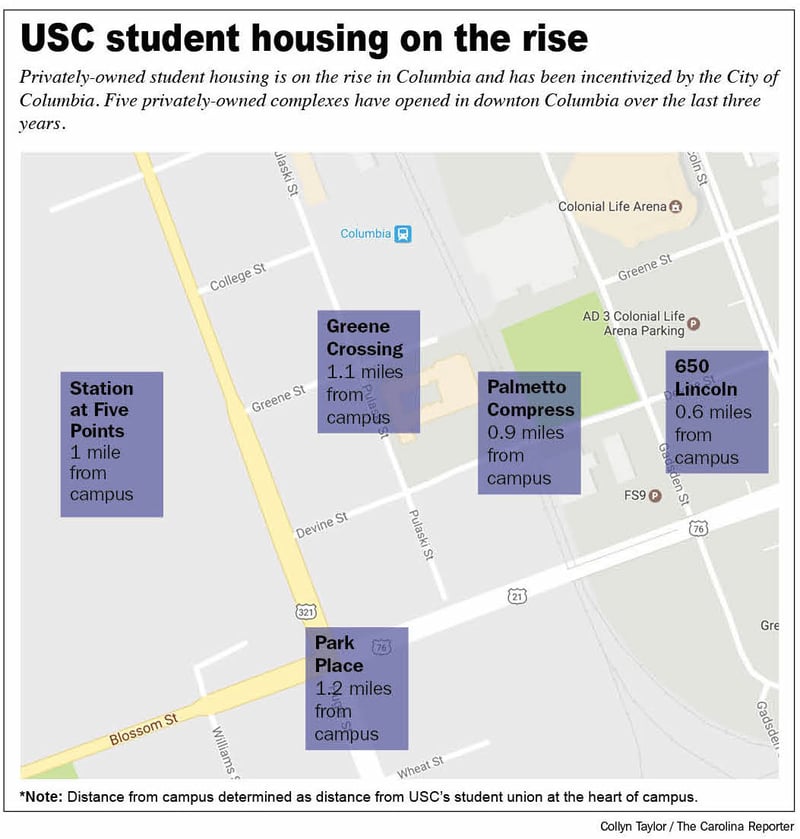 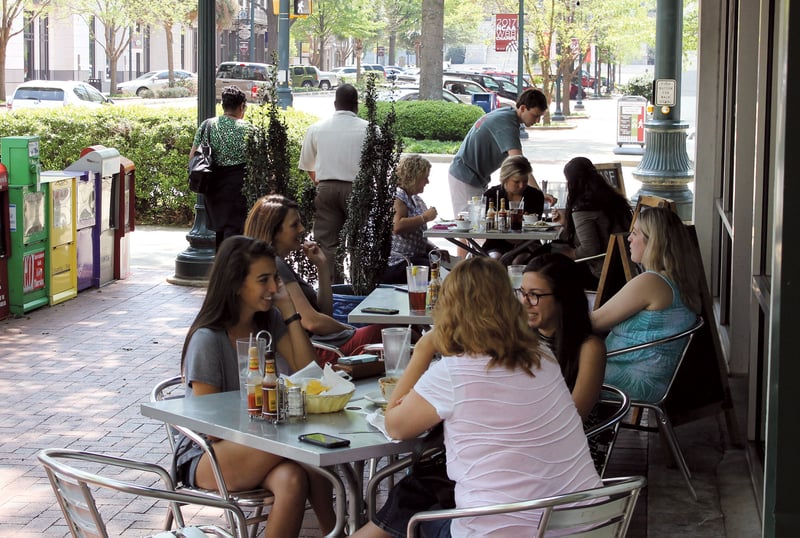 Students and professionals gather at Cantina 76 during lunch in Columbia on Main Street. The business opened after teh Hub, a prominent student housing complex, opened across the street and caters to university students. 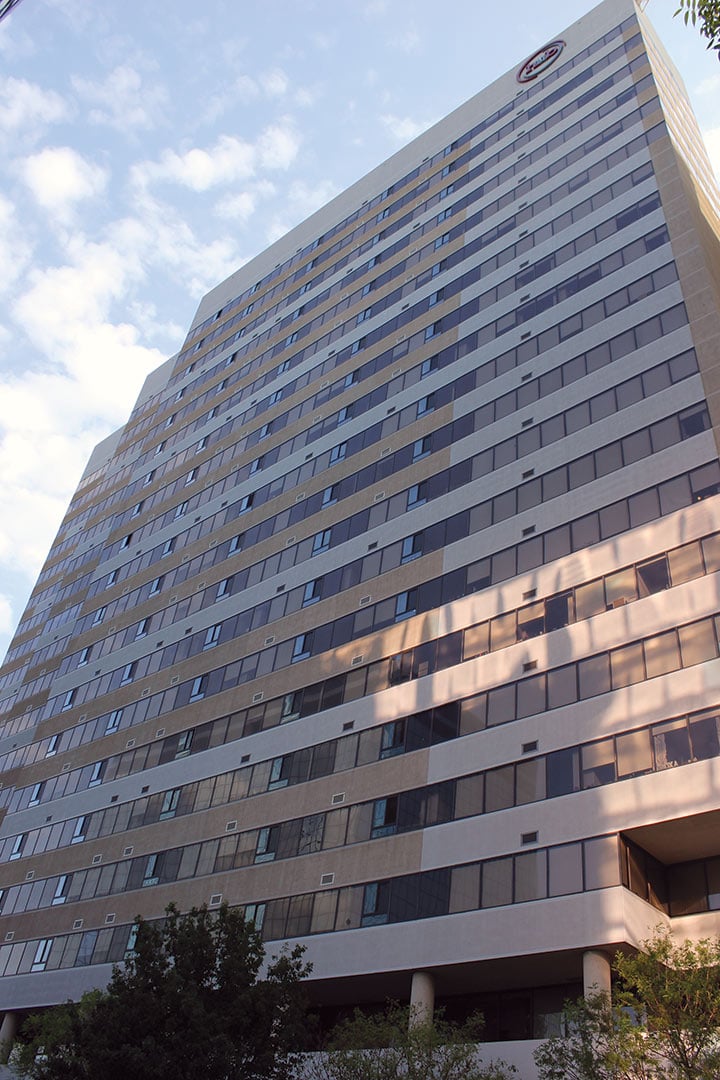 The Hub opened Fall 2014 on Main Street and is almost full with students from the University of South Carolina. It has also been good for local businesses, with students shopping and dining by their apartments. 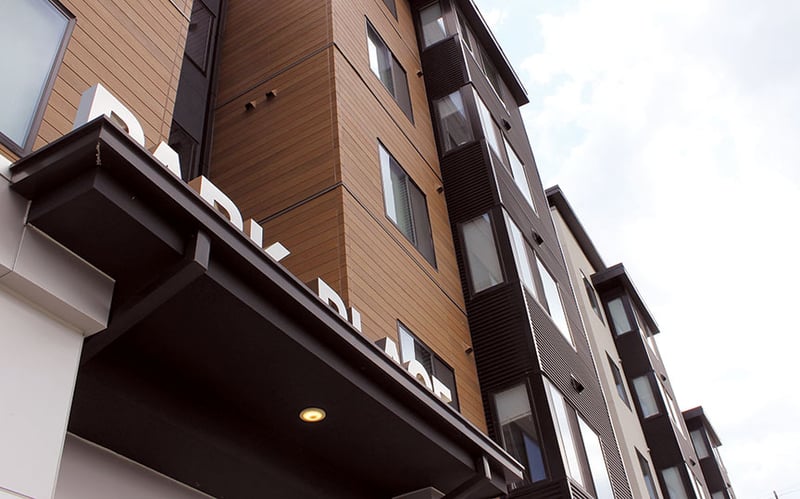 Park Place is tucked away on Huger Street, only a mile from the heart of USC's campus. The city is cutting property taxes on it and three other properties to encourage downtown development. 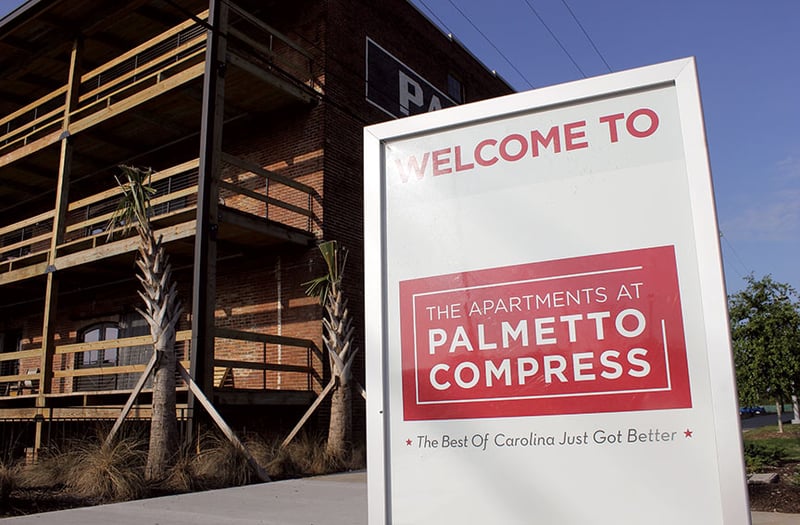 Palmetto Compress, located on Devine Street, was converted from a warehouse and turned into private student housing. The building's property taxes will be cut in half for the next decade as part of the deal struck with the city.

Second in an occasional series on the future of Columbia

It’s noon on a weekday, but Cantina 76 on Main Street is bustling. People are waiting for tables as servers sprint around, filling orders. This isn’t atypical for a major city, but it’s a little unusual on Main Street.

It’s a mixture of young professionals and college students with book bags draped over their chairs, eating lunch between classes.

Businesses like Cantina 76 are thriving because there are more student housing projects popping up in downtown Columbia.

In the past three years, five private apartment complexes catering to students have opened near the University of South Carolina’s campus: Station at Five Points, 650 Lincoln, Park Place, Greene Crossing and the Hub.

Park Place, 650 Lincoln and Greene Crossing are all located near the Colonial Life Arena on Lincoln Street. The Hub is on Main Street. The Station at Five Points is on Harden Street, up a hill from a bevy of local bars and restaurants.

It’s a far cry from five years ago, when the majority of student housing complexes were located near Williams-Brice Stadium and Interstate 77, more than two miles from the heart of campus.

“You have a lot of students coming in to go to the university, which is downtown, but the places they were living were not downtown,” Columbia's Director of Economic Development Ryan Coleman said. “That means students have to spend more time each day commuting and that’s more traffic and more congestion on the roads. Ultimately you want students as close to the university as possible.”

The influx of student housing comes at a time when the City of Columbia is luring developers closer to campus with tax breaks.

Three recently opened developments — Station at Five Points, Park Place and Greene Crossing — have moved to Columbia because of incentives put forth by the city. All three complexes are only a mile from USC’s student union.

The City of Columbia cut these private development’s property taxes in half for the first 10 years. The idea behind the incentives is bringing revenue in for the city and taking pressure off the city’s infrastructure so that students walk instead of drive to campus.

“If you’re not getting a project like this, you’re not getting this taxable investment. You’re getting zero percent of zero dollars for 10 years versus if you encourage that developer to come in and you can at least get 50 percent of taxable investment,” Coleman said. “Do you give them a break to help facilitate their move into downtown and capture that revenue, or do you continue to get nothing from nothing? I think that’s an easy question to answer.”

Coleman and the city hope the area around Colonial Life Arena thrives like Main Street. Coleman said the amount of money brought in by the city about $1.4 billion.

“What we saw with the Hub on Main Street, it created a lot of activity on the weekends and after five o’clock,” Coleman said. “Main Street in Columbia used to be a Monday-through-Friday, 8-to-5 destination. People came in, they worked downtown and they went home and went and did the stuff in their area. When the students moved into the Hub, Cantina 76 opened up, a few other bars and restaurants opened up. People started hanging around a little after work.”

Encouraging student housing in Columbia is a part of the city’s plan to make Columbia more than a work-only city, especially downtown.

A new private student housing complex, incentivized by the city, is being built on Assembly Street with the hope of bringing in added revenue.

With more students around the center of Columbia, Coleman hopes it will lead to increased foot traffic and revenue for the city.

“I think having the student population on Main Street really kind of helped," he said. "They’re calling Columbia more of an 18-hour destination. We’re not a 24-hour city yet, but having kids out and having that extra activity on the nights and weekends has certainly helped.”