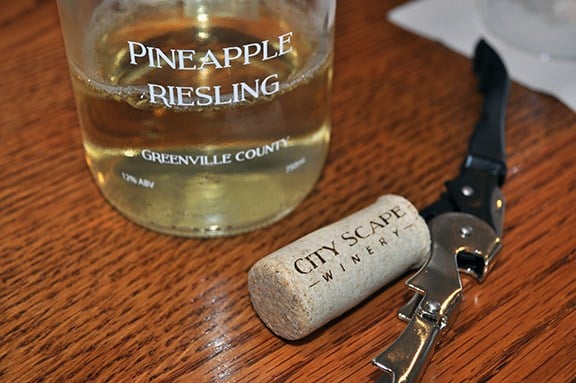 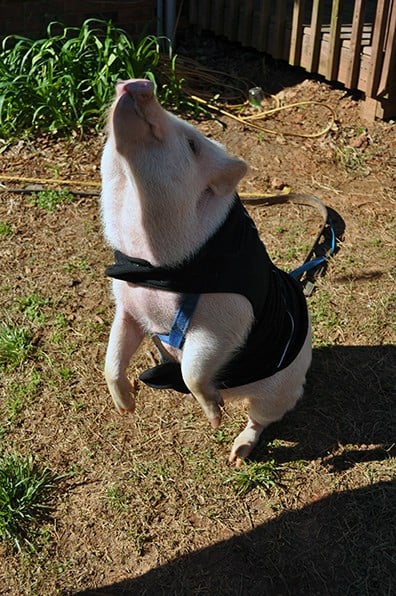 Deb Jones, an owner of City Scape Winery, says that Pinot the pig adds unique personality to the vineyard. Her husband, Josh Jones, surprised her with the miniature pig for her 30th birthday. 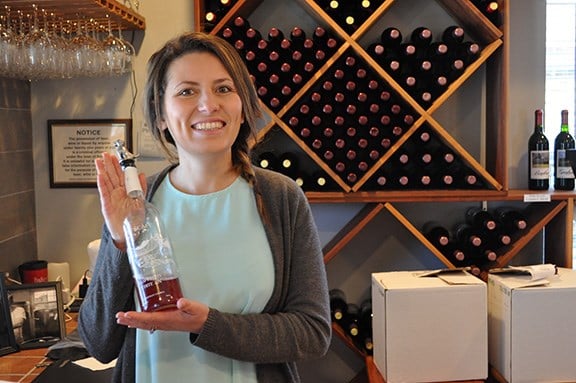 Deb and Josh Jones play to their strengths when it comes to duties around the vineyard. Josh works in wine production with the scientific and mechanical aspects of winemaking, while Deb often runs events and the tasting room to show the wine to customers. 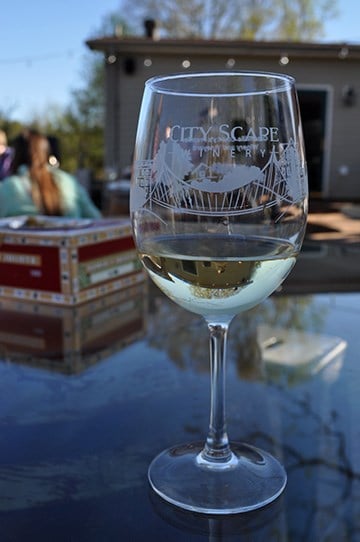 Deb Jones’ sister created the screen-printed Greenville skyline design that appears on City Scape Winery’s glasses and bottles. Jones believes that the wrap-around design and labeling helped the wines get picked up by a distributor. 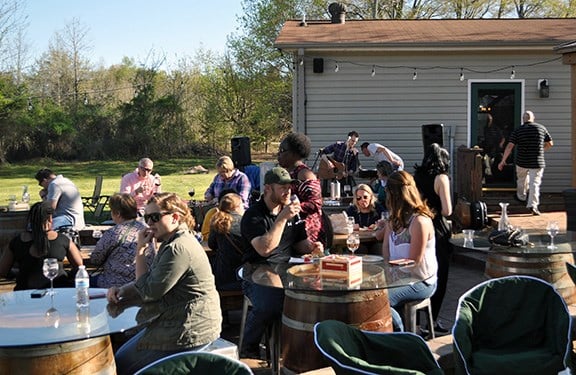 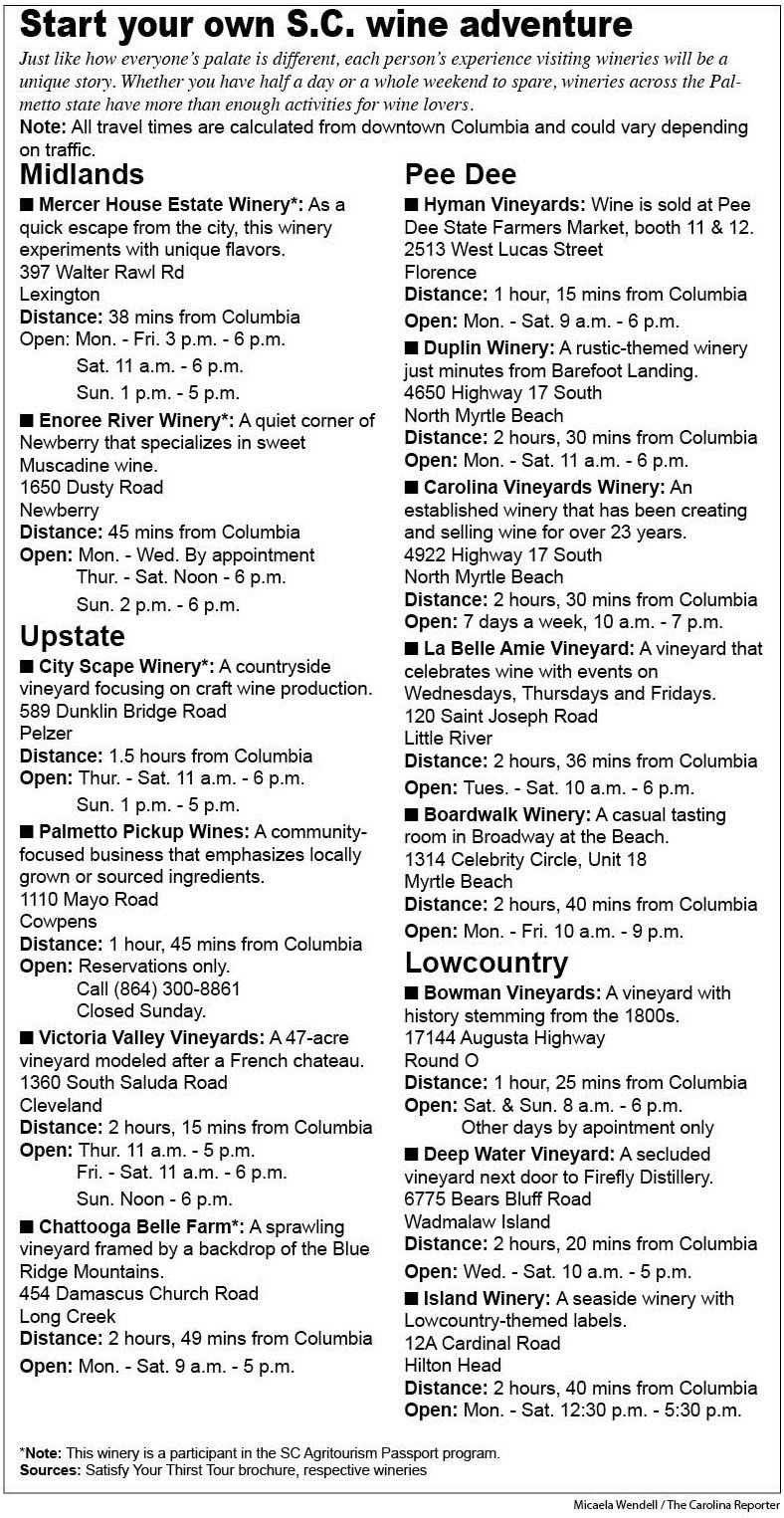 Paying off more than $100,000 in student debt and owning a vineyard by the age of 29 may seem like an elusive dream to most millennials. Deb and Josh Jones made it a reality at City Scape Winery in Upstate South Carolina.

Now, the couple is riding a wave of momentum for agritourism in South Carolina as some of the youngest and most energetic winery owners in the Southeast.

The realization of this dream came after a long road of hard work and right decisions.

Josh Jones met Deb Jorgenson met at Roberts Wesleyan College in Rochester, New York, when they shared a student mailbox. Deb tracked down Josh for not cleaning out his ever-increasing pile of junk mail. After they met up and began talking more, they started dating and found they shared an appreciation for winemaking.

The couple produced 10 varietals of wine for their wedding reception in 2012, and the guests suggested the couple make winemaking a business.

“We had a little over 100 bottles, and we went through a hundred bottles for a hundred people at our wedding, so it was obviously a hit,” Josh Jones said.

More than anything, though, the Joneses wanted to eliminate their college debt. Each took on two jobs — one corporate career and one side job. Josh worked at Michelin North America Inc. and did wedding photography on the side. Deb was a social worker and did therapy in her extra time.

“We attacked that debt, and so we were 28 years old with paid-off mortgage and all the debt paid off,” she said. “I really hope that we inspire other students. Everybody can do it. It’s a lot of work, but anybody can do it.”

While they stowed away cash to pay off debt and build up savings, winemaking was still a hobby for the couple. They often frequented City Scape Winery for home winemaking supplies and pointers. Their regular visits established a solid relationship with then-owners Anita and Wayne Tamme, so when the Tammes were ready to retire, they approached the couple about buying the winery.

“To me, it was like this big turning point in our lives,” Josh Jones said. “It’s like, ‘Okay, are we going to be entrepreneurs and work for ourselves, or am I going to sit in this cubicle here at Michelin and continue to be the corporate worker?’”

The couple went back and forth on the decision for months, as they considered the prospect of going back into debt so soon and making a possibly life-long commitment to a vineyard.

“Let’s just be real,” Deb Jones said. “We were doing very well, and we could be living in this gorgeous house in downtown Greenville and living the good life — and safe life — but a good life … or we could sacrifice it all, maybe rough it out a little bit.”

She and her husband closed on City Scape Winery in November 2015 when they were both 29. After a three-month “training wheels” period with the Tammes, the Joneses were running the vineyard and winery by themselves. Making the property, nestled in the country 30 minutes from Greenville, their own proved a little overwhelming.

“We were kind of stuck in this rut because it was like, ‘How do we start first? How do we transition first?’” she said. “Because there was so much to do.”

Jones likens their changes to HGTV’s “Extreme Home Makeover,” calling it “Extreme Winery Makeover.” Since then, they have remodeled the tasting room, built the patio by the vineyard, changed up the wine menu and even got their wines picked up by a distributor, so their products are sold in off-property stores in South Carolina like Total Wine and Lowes Foods.

With their self-proclaimed “hipster” style, the Joneses hope to make City Scape Winery “Greenville’s winery” to grab their own share of South Carolina’s ever-growing agritourism industry.

Jackie Moore, director of the South Carolina agritourism program, has seen this industry blossom since the department’s creation three years ago. She believes that farmers in the state have been looking for extra money after several years of extreme weather events — from droughts to tornadoes — harming crop yields.

“More and more are turning to agritourism as a side income to their regular farming,” Moore said. “And that’s happened nationwide, but especially in South Carolina as well.”

City Scape participates in the passport program, and Deb Jones says that the winery has seen many visitors come in with the booklets. Jones says that her father-in-law, who also helps out on the property, is a huge fan of the initiative.

“He promotes that thing more than anybody else,” she said. “That is his thing, and so he goes around saying, ‘Lemme tell you about this’ and stamps it, and it’s so cute."

Josh Jones said that he and Deb were invited to a party at the governor’s mansion in November 2016 that celebrated Satisfy Your Thirst, which advertised beer, wine, spirit and other beverage-makers throughout the state. Then-Gov. Nikki Haley emphasized her desire to catch up with neighboring North Carolina in boosting agritourism.

Will Culler, a regional agribusiness development agent with Clemson University, also believes that the Palmetto state has some catching up to do against its northern neighbor.

“Tourism agriculture is the number one business in our state of South Carolina, but we are lagging behind … compared to North Carolina and Virginia and even Georgia,” he said. “But North Carolina especially has done really well in getting a strong agritourism department from 10, 15 years ago and really going forward with that.”

City Scape Winery is trying to capture its own share of incoming tourists by focusing on the vineyard’s ambience and hosting events, Deb Jones said. Despite both being first-level sommeliers, she and her husband are trying to keep the winery a place where they can educate consumers about wine in a non-pretentious way, as other wineries across the state are doing, such as Enoree River Winery in Newberry and Deep Water Vineyard on Wadmalaw Island.

The next generation of SC vineyard owners

For other young people who dream of quitting their day job to start or take over a vineyard, Josh Jones relayed advice from a business book he recently finished reading.

Deb Jones also took to heart advice from an international winemaker she met at a conference.

If buying a vineyard is a little far out of a wine fan’s budget, City Scape Winery offers “U-Vint” classes, where Josh and Deb Jones will guide people through the winemaking process. The entire winemaking cycle for the class will take up to four visits over four to six weeks and will yield about 30 bottles of wine.

City Scape Winery specializes in craft wine, which (much like the booming craft beer business) means that the Joneses often use unconventional ingredients for their production, such as pineapple juice or chocolate essences. The tendency for featured wines to be dry proved difficult at first for attracting (or keeping) customers of the previous owners, but Deb Jones was not afraid for them to take chances.

Deb and Josh Jones’ shared love of winemaking has led them to travels through California wine country as well as foreign countries such as Spain and Italy, where big-name wineries reign and local farmers struggle to attract visitors. They pull inspiration from every location they visit, so they are often brainstorming ideas to innovate and evolve their wines.

City Scape Winery is open Thursday through Saturday from 11 a.m. to 6 p.m. and Sundays from 1 to 5 p.m. Groups of seven people or more are asked to make reservations, and the Joneses are open to hosting personal events by reservation, such as parties and weddings.

The increasing agritourism traffic through City Scape Winery has left the property “bursting at the seams,” with an ever-rising need to expand the buildings and storage space. Although running a vineyard and winery can be a hectic job, Josh Jones believes that the winery’s success has made the tough work worth it.

“I didn’t want to be 45 and still sitting in that same cubicle and say, ‘I had this opportunity to take on something that I love and grow my own business instead of working to grow somebody else’s,” he said. “’And really create something that can have a huge impact on people and bless the community but also be very rewarding for us at the end of the day.’”