A map of infinite connections - DatelineCarolina 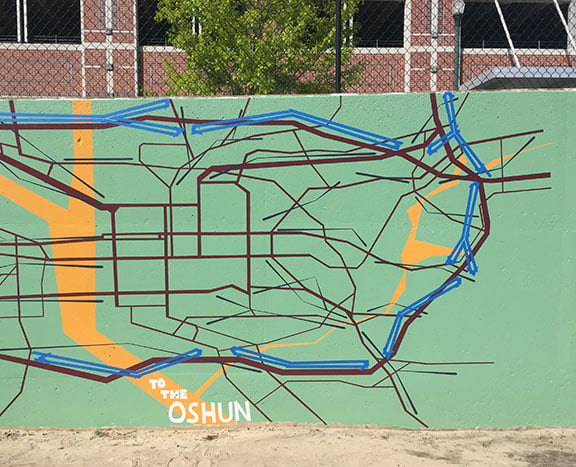 A map of infinite connections 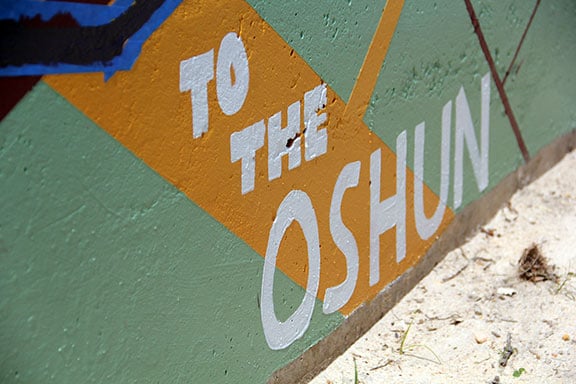 "To the Oshun" is an allusion to the African river goddess. Dantzler was inspired by an older artist who once drew a map and labeled the Atlantic Ocean, the "Atlantic Oshun." 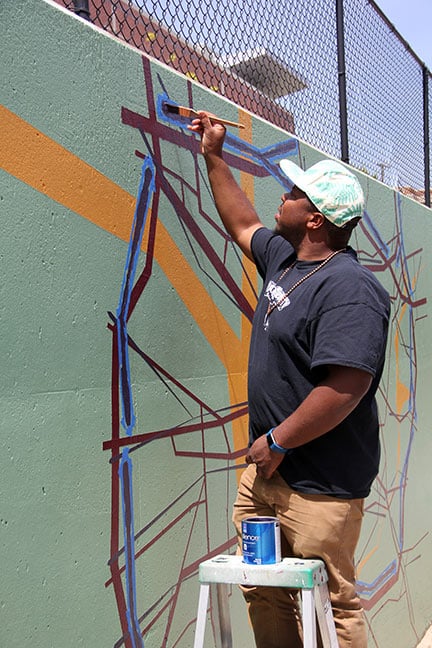 Local artist Michael Dantzler, 31, of Eastover, started drawing and collecting maps around the age of six after being exposed to his father’s model train displays. 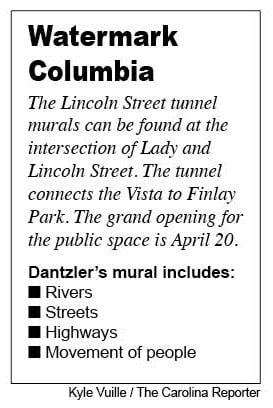 In the entrance to the Lincoln Street tunnel, a palette of brilliant colors pop off the wall, transforming the gloomy pedestrian walkway into a vivid passage to imagination.

On a recent April morning, local artist Michael Dantzler commenced painting a mural of Columbia on one of the walls, a giant grid map he paints from memory.

“I’m not writing any names of streets. People have Google maps for that,” said Dantzler. “Pretty much the idea behind this is Columbia: map of infinite connections.”

Dantzler, 31, was chosen by Leadership Columbia to take part in its "Watermarked" project that commemorates the historic thousand-year flood of October 2015. The newly renovated public space, which celebrates the city's community and unity, will open April 20 in partnership with OneColumbia.

“I’m a big advocate of public spaces. I believe that people should have other places to go besides work, home and shopping. Sometimes you should just have a destination where you can just sit and relax and enjoy the scenery,” said Dantzler, who holds a degree in geography from USC.

Dantzler first became enamored of maps as a young boy growing up in Eastover. His father collected model trains and set up miniature cityscapes around their house.

“I always had an overview of towns and I always found that interesting,” Dantzler said. Those moments in his life became the seeds for the artist he is today.

His love of maps and geography goes deeper than just the lines he draws. He remembers, shortly after his father’s death, he got lost with his mother when he was about seven years old.

“We got lost on the interstate and I cried really bad,” Dantzler said, “and I made a vow to myself to never get lost again.”

He started buying, collecting and studying every Rand McNally map he could get his hands on as well as drawing his own from his imagination.

“I used those maps as a kid to travel within my head if I wasn’t able to physically, and when I finally did travel, I knew exactly where I was going, down to the exit,” Dantzler said. “It amazed people.”

In the Lincoln Street tunnel mural, the map is colored coded depicting highways, streets and the movement of people around the metropolitan area. Dantzler’s vision includes some geometrical shapes representing landmarks around town that could potentially spark treasure hunts among onlookers of his piece.

Dantzler has painted two other murals in Columbia. One sits in the stairwell of the Nickelodeon Theatre and another drawn in chalk in inside USC’s School of Music.

“This is kind of the only thing I know how to draw actually,” Dantzler said. “My brain works in layers like a map.”