By his own admission, Tyrone Geter says he is not the best-known artist. His work is not commercial, and he does not paint what will sell in galleries.

But the 72-year-old painter and Benedict College professor is experiencing a late-life renaissance in the art world as people discover the deep revelations in his larger-than-life pieces.

“My work is not supposed to allow you to walk past and not feel. I believe that one of our problems in society is that we’ve learned not to care,” Geter said. “We see something happening to someone, we say ‘oh, wow, that’s too bad,’ and you go on about your business and that keeps happening. Mine was to make us feel like we are one with the human race.”

The power of Geter’s world view and imagination is on view at the Columbia Museum of Art, where “Enduring Spirit: The Art of Tyrone Geter” runs through June 11.

Will South, chief curator of the Columbia museum, says Geter explores through his art the thorny issue of uniting different ethnicities in America and understanding each other without stereotypes. 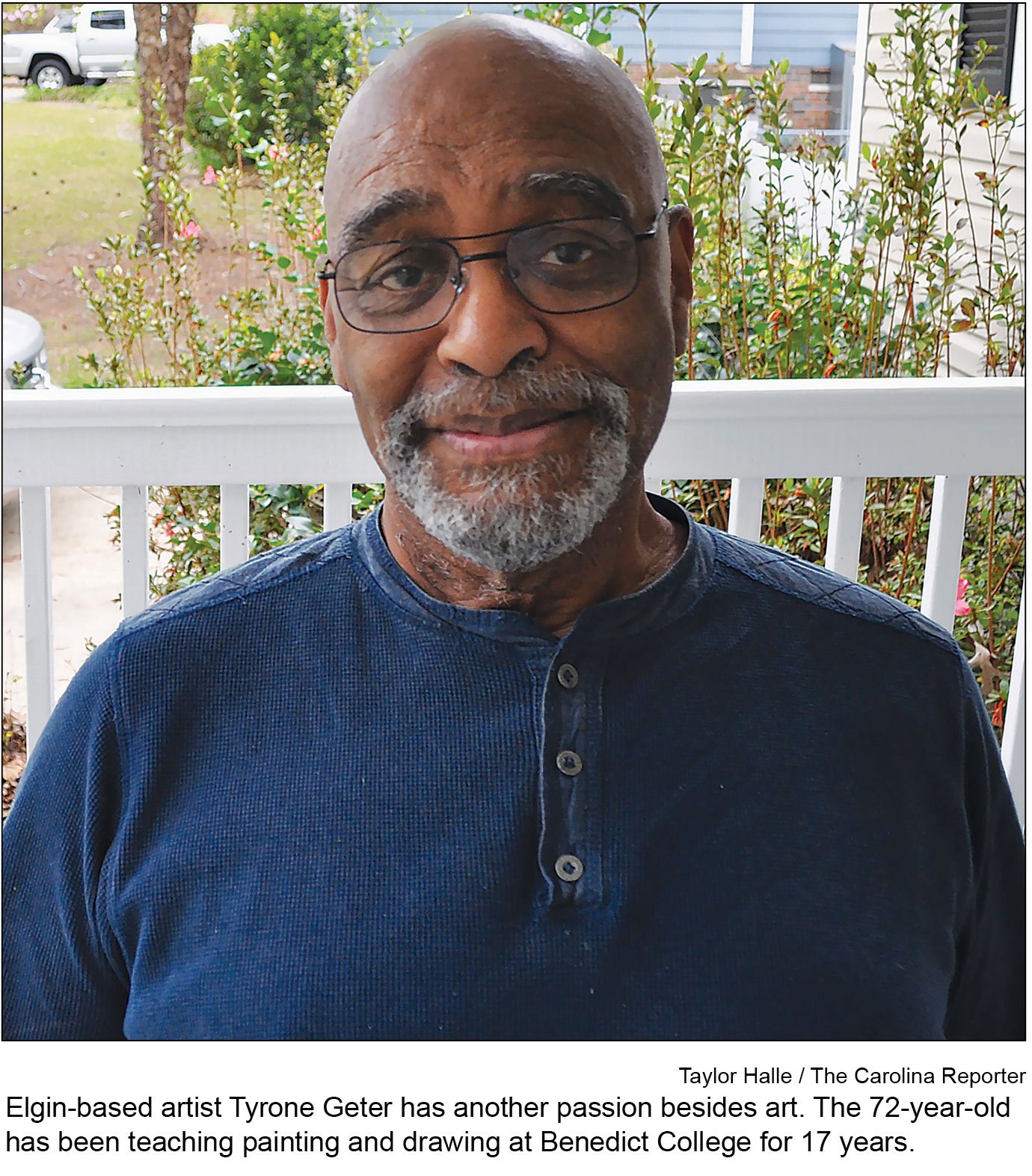 “Tyrone takes that on,” South said. “He’s not a politician, and yet he is. By default, you are making statements that people listen to, and that’s powerful.”

The size of his exhibit’s opening night audience attested to this.

“It was black, white, but beyond black, white, it was young and old," South said. "Young people of any color or any background, we have a hard time getting into the museum, because they’re all about their cell phone and their social life.

"Some of them were his students - that says something. They love their teacher, they like what he has to say.”

The power of family

Geter’s early years were spent in segregated Anniston, Alabama. Raised by a single mother and surrounded by two sisters, Geter realized the power of women early on. Today, that theme is reflected in his work, which often depicts outsize auras of hair on his female subjects.

His earliest exposure to art came from his eldest sister, who enjoyed drawing comic books and using the “Draw me” instructional booklets of the times. After watching her sit at the table and work, he decided to try it for himself.

Geter’s family later moved to Dayton, Ohio, seeking a safer life as an African-American family trying to survive in a time of institutionalized southern racism. The young and curious artist attended Roosevelt High School, where he met Ruth Nincehelser, a teacher that would become an instrumental figure in his early career as an artist.

“Those students that she thought could do art, that had possibility, she drove us relentlessly,” Geter said. 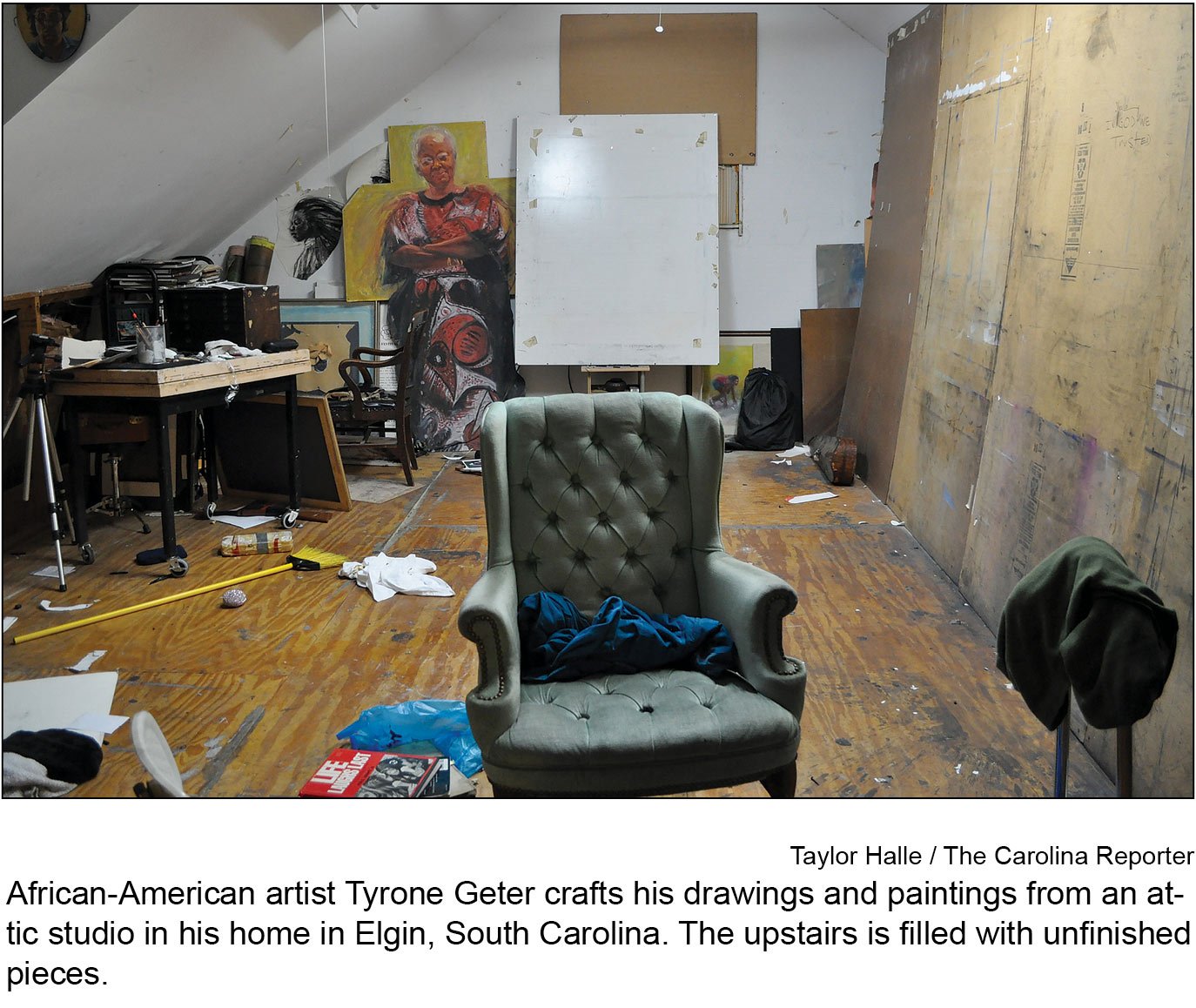 In his senior year of high school, he still hadn’t learned how to drive a car, so he decided he would quit art and take driver’s training. But Nincehelser called his mother and implored her not to allow her son to abandon his art.

His teacher asked “if she could find any other way to let me take driver’s training, and if she had to she would help her, and I think she actually did,” Geter said. He remained in art and his mother worked extra hours so he could learn to drive outside of school.

After graduating high school, Geter attended Ohio University in hopes he could master painting the figure and realistic drawing. Here, he met his Nigerian-born wife, Hauwa, another integral figure who would eventually lead him to Africa, a place that influenced his art ad represented a turning point in his artistic career.

After they married, the couple moved to Hauwa’s home in Nigeria near her family. Their two daughters, now grown were born there.

“When I left Ohio, I had no concept of Africa.  I’m not even sure I had even met an African in my life from Dayton, Ohio,” Geter said.

Once there, he landed a job teaching art at Ahmadu Bello University, the biggest university in West Africa at the time. They stayed for seven years, moving back to the U.S. because of Nigeria’s crumbling economy, and the need to start their daughters in American school. Most importantly, he wanted to give his daughters a chance to meet his family and learn his side of the culture.

After his time in Nigeria, his art transformed into a search for a universal language.

“For most of my life as an adult artist, that’s what I’ve been trying to do,” Geter said. “Find a way to speak a universal language that will talk to anybody that sees it, and this is the first time I feel like I’ve gotten close.”

For a long time, Geter said his main subjects were family, because his mother, sisters, wife and children represented such a powerful force in his life. He also became a successful illustrator of children’s books and now claims nearly a dozen to his credit.

For the last 17 years, he has taught art to students at Benedict College, a private historically black college in downtown Columbia. He and his family lived in the Waverly area near the campus until his wife’s death in 2004. She was his ballast – and also the organizer of his many projects - so he determined he could not stay in the home where they had been so happy and raised their family.

He moved to the little community of Elgin, a 30-minute commute from the college, where it is unlikely his neighbors know an artist resides in their midst.  There he creates art in his cluttered second-floor studio and contemplates how to approach the big questions of life.

My life has been one big wall

Geter has rarely listened to voices except those inside of his own head. So he has been shocked by the response to the two dozen pieces that hangs on the walls of the Columbia Museum of Art.

People have come to him, some crying, saying how much the paintings move them emotionally.

Geter said that’s what he has been trying to do all along.

“I’m trying to make you get past the fact that this might be a black face," Geter said. "That face is the same thing your mother went through or your father went through."

“If I’m talking about any particular issue, you can darn well believe that whites, Hispanics, everybody got that same issue, so when you look at it, that’s where they go; they go to their own experience with that. They don’t see that black face anymore, they see themselves. It may not be a universal statement but it’s mine.”

The path for Geter has been filled with more road blocks than most artists might go through. Although he’s been featured in other exhibitions including museums and galleries in Boston and New York, Columbia has been one of the most important.

“What I do, it’s never on that cutting edge, what they’re demanding out there. I’m always at odds with the market, so that’s one continuous wall for me,” Geter said. 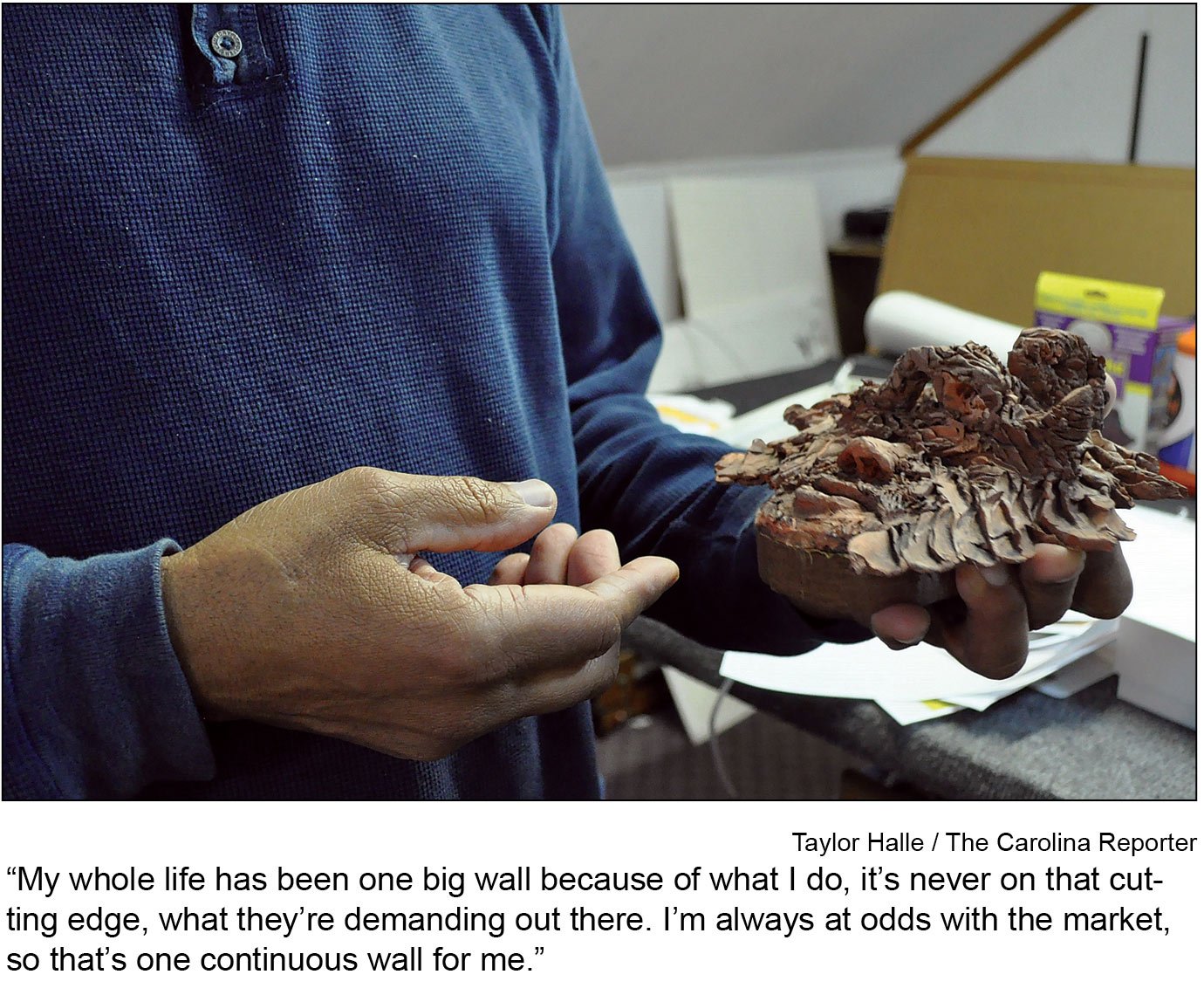 He remembers a director at the Aiken Art Museum who told him he was going to struggle his whole life, because Geter’s work is difficult to pigeonhole. He said when galleries can’t do that, it’s hard to find a track record for selling what he does.

“I don’t know how to get beyond it either and at this point in my career I really don’t care about that wall anymore,” Geter said. “My thing is that I can live with me. I think there was a time I really hated myself, but right now I’m OK with me.

“I know this that I’ve done the best I could. I know my mother raised me to treat people better than anything else, they’re the only thing that counts in the world. Nothing else matters but people.”

One of the lessons Geter says he tries to teach young artists is that the best thing they can do for themselves is learn technique.

“I don’t care what anyone says, learn technique and you’re free. You’re free to go any place you want to go.”

This has proven to be true for Geter, as his portfolio is filled with not only just paintings, but other mediums such as charcoal, pastels, torn paper and ceramics.

But one theme that stays consistent among all of these is the subjects’ hair. In almost every piece, Geter weaves in wispy, playful and exaggerated hair, sometimes even resembling the roots and branches of trees. He connects it back to his youth in a household full of women.

His two daughters grew up washing their hair and allowing it to air dry, which was a common thing among African-American women in Nigeria. But when they moved back to Ohio, they soon realized others were confused by or disapproving of the curly manes.

Geter remembers his oldest daughter decided to ride around on her bike so her hair would dry faster, but the other neighborhood kids quickly began harassing her.

“She came back in the house, she was so hurt. After that she wouldn’t go outside with her hair like that again. That was something that was just tragic, that’s a loss of innocence. It was really, really tragic that we could do that to each other,” Geter said.

Years later, Geter was working on a piece called “Target,” which he recalls being his first to incorporate his signature hair illustrations. The incident with his daughter’s hair popped back into his mind. 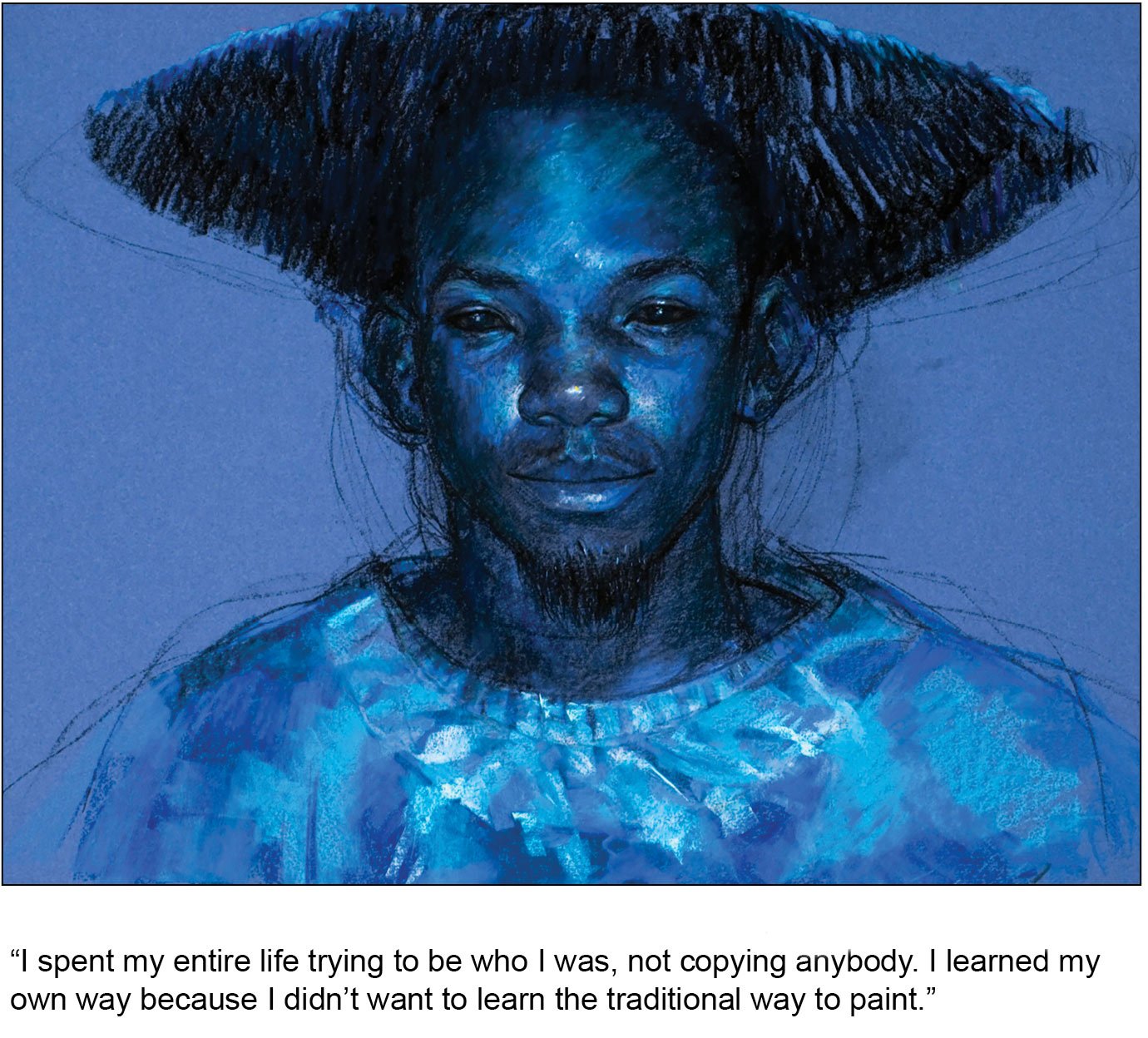 “Women are being targeted for looks, body types, all kinds of things. That’s where it started and after that I just kept using it,” Geter said. “It’s not deep it’s just meaningful. When I was growing up, women were a major force in our community.”

Mastering the craft of voice

Peter Chametzky, the director and art history professor at USC’s School of Visual Art and Design, discovered Geter’s work just a couple years after moving to Columbia from New York. He says Geter is a master draftsman and skilled artist, and successfully uses these skills to make statements about identity and counter stereotypes.

“He’s dealing with textures a lot and he’s dealing with, you know, it’s not conventional drawing in that he’s drawing both with charcoal, colored pastels, as well as using materials like torn paper as drawing material in itself,” Chametzky said. “So collaging it together and that kind of materiality I think appeals to people. You’re seeing that work of art as an object and seeing it as more than just a picture, it’s not a picture, and it’s not like a photograph, it’s got texture, it’s got this kind of physical presence.”

He points out Geter deals with subject matter that is especially important in what the United States currently deals with today.

“He’s not followed various art world trends. He’s followed his own path and that’s what, in a sense, I think most really strong artists do. They’ve got to follow whatever path their own artistic will guides them to and that’s the way to make strong art,” Chametzky said.

Geter believes he has found his voice, and more importantly, a way to get others to listen to it.

“I do art because I have a right to speak. You don’t have to listen to me, but you have to allow me to speak. And if I want to reach a mass of people, how was I going to do it? All I had was art.”