Making it over the bridge - DatelineCarolina 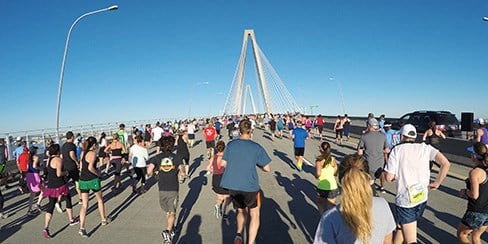 Making it over the bridge

Volunteers organized the 36,622 runners in the Cooper River Bridge Run into 15 corrals at the start. Participants ranged from elite runners to walkers and wheel chair participants.

At age 24, I was running the bridge competitively for the first time. 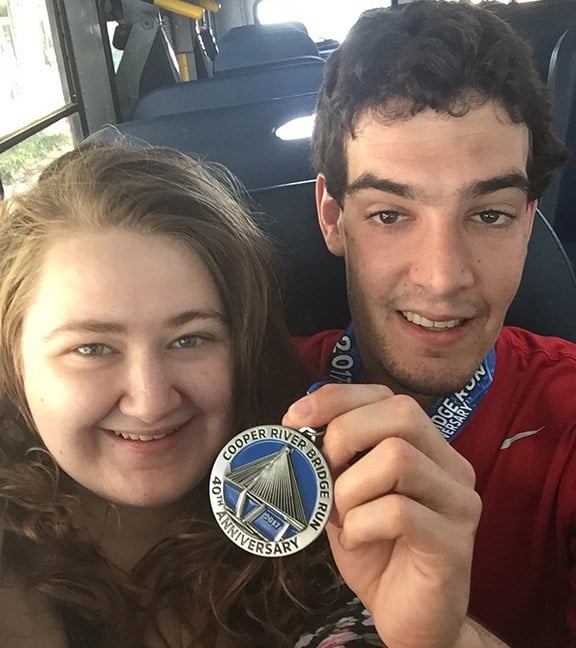 In honor of its 40th anniversary, organizers of the Cooper River Bridge Run handed out medals to all finishers.

The big challenge of the run is making it to the top of the bridge, a challenge that has made it one of the biggest races in the nation.

If you have ever been a part of Charleston’s Cooper River Bridge Run, you will understand – it’s not a race, it’s an experience.

My hour-long journey was nothing short of amazing. I have been to plenty of races before, but none like this. Now in its 40th year, the Cooper River Bridge Run was the largest run that I have been a part of, with more than 36,000 runners and walkers at the starting line.

The course was set at 6.2 miles, starting in Mount Pleasant and ending on King Street in downtown Charleston.

The first two miles of the run were preparation for what was to come—the towering Arthur Ravenel Jr. Bridge. The sea of humanity at the starting line made it impossible to separate yourself from the crowd. On multiple occasions, I had to slow down and dodge other runners to avoid tripping over people and getting injured.

As I ran with the other runners and walkers, music and fans filled the sidewalks around us. There was every genre of music from ‘80s rock to electronic house music played by a dozen groups scattered along the course. I focused on the music as I made my way to the second two miles and the beginning of the bridge.

Once at the bridge I noticed that the condensed sea of participants seemed to bunch up even more.

The 575-foot-high eight-lane bridge is divided in half by a median for the usual traffic to come and go in opposite directions. Half of the bridge was being used by traffic which meant that the thousands of runners and walkers only had one half of the bridge to use.

Although I was too focused to feel it, others told me before the race that the bridge would be swaying to and fro beneath my feet. This did give me motivation to run faster, but mostly out of fear.

The last two miles were my countdown miles. These are the miles that I count, either in my head or aloud, much to the annoyance of the other participants. I got a few complaints of me being too loud and a distraction to other runners.

Fifteen minutes later, I could see the finish line. I sprinted under the giant “COOPER RIVER BRIDGE RUN” banner and collapsed in the crowd of finishers. I picked myself up and began walking with the crowd as to not get lost in the foot traffic.

Because of their 40th anniversary year, the run included medals for the participants. I got my medal and proceeded to meet up with my girlfriend who came here to support me.

I turned around and began to retrace by steps in hopes of meeting up with her on the bridge. We met up thirty minutes later, running towards each other with sweat on our faces. We took the shuttle back to her car from the finish line and headed back home.

I went to the Cooper River Bridge run and got more out of the race than I expected. Not only was it an amazing challenge shared with so many people, I will always remember sharing part of it with my girlfriend.

I can honestly say that it is more than a run or walk. It is an experience of a lifetime.