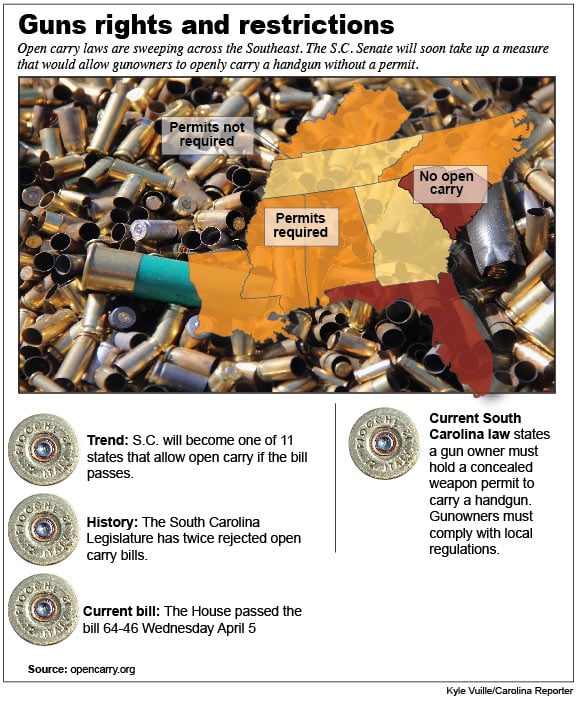 Legislation that would allow legal gun owners to openly carry handguns without a government permit narrowly passed the S.C. House Wednesday afternoon but will face more scrutiny in the Senate.

The House voted 64-46 after more than three hours of debate. Five did not vote and five were absent.

Some legislators and opponents of the so-called “open carry” bill said Thursday they were frustrated by the way the bill had been pushed through a committee and onto the floor.

“They didn’t allow any public input,” said Arlene Andrews, of Blythewood, a member of the S.C. chapter of Moms Demand Action for Gun Sense in America.

Members of the group are visible around the State House because they don red T-shirts that read “EVERY TOWN FOR GUN SAFETY” across the back. The shirts establish the women as a part of a nationwide group, Moms Demand Action for Gun Sense in America.

The nonprofit group, launched on Facebook by Indiana resident Sharon Watts in the wake of the 2012 Sandy Hook school shooting, has expanded across the country with chapters in every state.  Each chapter consists of mothers, survivors, and some mayors, who have their own group, Mayors Against Illegal Guns.

Andrews, a retired professor at the University of South Carolina College of Social Work, recalls the images from the Sandy Hook shooting and seeing people praying in the aftermath.

“The answers to those prayers was to go out and do more,” said Andrews.

Andrews is one of the women who dons a red shirt. The safe gun law advocacy group monitored the House committee where they were not allowed to speak and followed up by watching the House debate from the gallery above.

The group is now on to lobbying their message of safe gun legislation to state senators before the bill heads to a Senate committee.

“That’s what I’m doing today, contacting all the senators who oppose this bill,” Andrews said Thursday.

The bill’s sponsor, Rep. Mike Pitts, R-Laurens, and proponents of the measure believe it reflects the intention of the U.S. Constitution and the writers of the Second Amendment. But some were worried that there is no provision for training in the bill or question how law enforcement would handle volatile situations, particularly related to the minority community.

Pitts has acknowledged that the bill would have to be revised significantly before the Senate would even consider passing such a law. The measure has failed in previous years.

“You are not under government permitting for a constitutional right,” Pitts said.

Andrews worries the measure will have a detrimental effect on tourism in the state if passed.

“Most people want to feel safe and they will go elsewhere if they see people walking the beach or in the local bar openly carrying a gun,” said Andrews.

Moms Demand Action for Gun Sense in America has expressed that they are not against guns nor does the group want to take guns away.

“We are not against guns,” said Sylvie Dessau, “but we want safe gun legislation.”