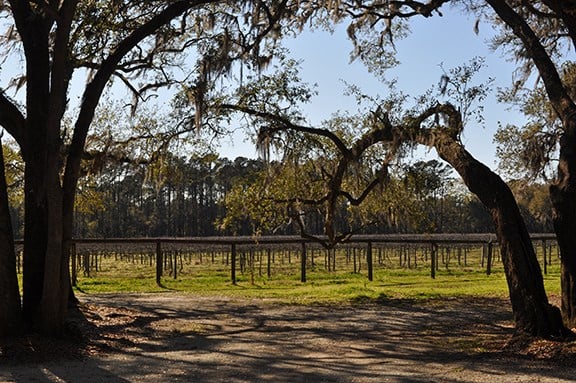 Amid the grapevines: Vineyard owners love life close to nature 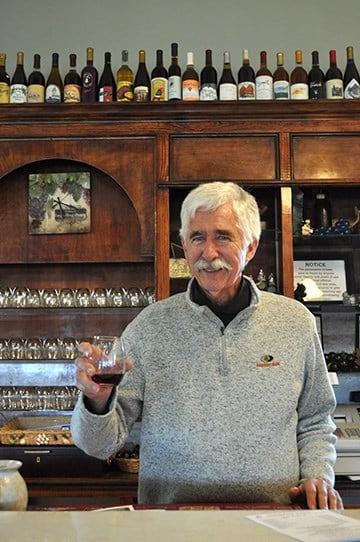 Richard LaBarre, co-owner of Enoree River Winery, considers himself more of a beer drinker but appreciates the business of wine. 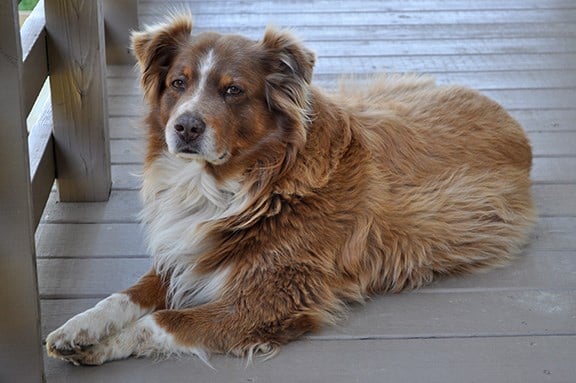 Dusty is one of the LaBarre family’s pets at Enoree River Winery. They named their Viognier wine, “Dusty’s Road,” after him. 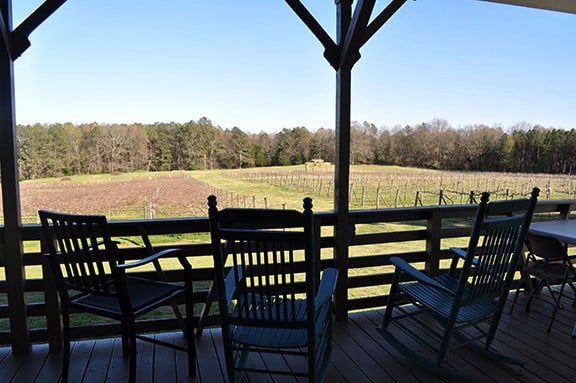 The vineyard at Enoree River Winery in Newberry used to be a cow field. Winery owners Richard and Laura LaBarre enlisted the help of their friends and family to prepare the land and plant their first vines 12 years ago. 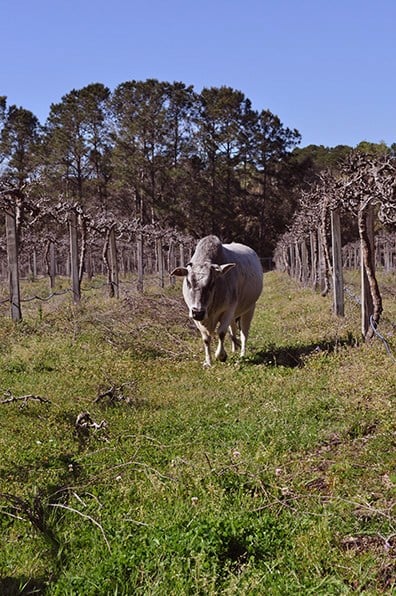 Ida Claire is a friendly cow at Deep Water Vineyard who lives among the vines. She spends her days grazing and munching on pruned canes that lie on the ground. 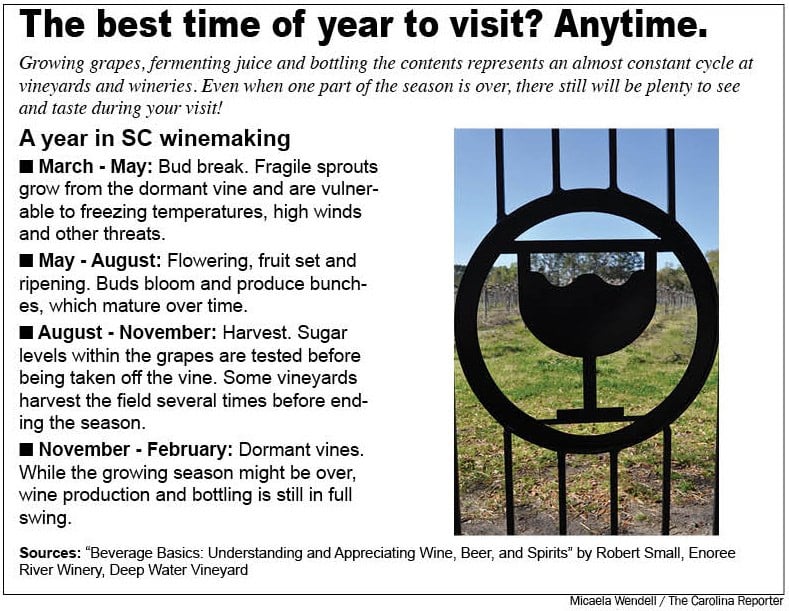 Part two of an occasional series
Explore the challenges of S.C. winemaking in part one here.

At this juncture in his life, winemaker Richard LaBarre expected to be relaxing on his version of Easy Street.

“I like to say that when we got this place 12 years ago, my five-year plan was to get a white suit, a rocking chair, a Cuban cigar and a glass of wine. That was my five-year plan,” said LaBarre, 69. “Twelve years — I’m still in T-shirts and blue jeans.”

Over that time, LaBarre and his wife, Laura, transformed a muddy cow pasture into Enoree River Winery in Newberry, planting 800 grape vines with the assistance of family and friends. He said that while they take their business seriously, they don’t take themselves seriously. Jokes, smiles and Southern charm are the norm on their property.

The operation is one of more than a dozen vineyards and wineries scattered throughout South Carolina, ventures that have become agritourism stops for visitors. Wine has become a way of life for these independent grape growers, and it is often a family and community affair.

The LaBarres consider themselves the only full-time workers at the vineyard, but friends and family have been contributing to the winery since the beginning. Richard LaBarre’s brother moved from Florida to work with them for a few years, and the LaBarre’s two grown children also pitch in. Laura LaBarre’s father and uncle often worked downstairs below the tasting room on the vats and equipment.

“We wouldn’t have been able to do it without everybody’s help,” she said. “’Trade you a couple hours for a bottle of wine!’”

The crucial help from loved ones sometimes inspires the LaBarres in naming their wines. “The Barbarian” was named after their friend Barbara, who helps out on Saturdays in the tasting room. They have named wines for the pets on the property.

Jesse Freiwald co-owns the business with his wife, Andrea, who helps with marketing and is the chief financial officer of the property. They purchased the vineyard, formerly known as Irvin-House Vineyard, from Jim and Ann Irvin in 2015. Their first year as owners, he said, was filled with adjustments.

“It was very busy. It was a good busy, though,” the South Dakota native said.

Andrea Freiwald has a separate business of her own, so she splits her time between both locations while Jesse Freiwald works full-time on the property with hired help. To further adapt their lives to the vineyard, the Freiwalds homeschool their three young boys to balance the demands of the farm with the need to provide a quality education for their children.

The Freiwalds moved from Minnesota after feeling a calling to the South, and in their first year as vineyard owners when Hurricane Matthew hit in October 2016. The winery closed to the public a week before the storm hit. The Freiwalds boarded up all the buildings on the property and evacuated to ensure their boys’ safety.

The family returned to their home to find they had lost 40 trees on the property, and 40 muscadine vine trellises had blown over. The water level also rose uncomfortably high during the storm, so they worried that salt water could have possibly entered the field.

“Did that actually affect the grapes or not? We’ll kind of wait and see,” Freiwald said. “I think we’ll be OK. Again, it’s the hardiness of the grape.”

Maintaining a vineyard is a tough job even with perfect weather, so the Freiwalds started their own tradition to bring good fortune to their vines each season. The Boots, Bottles and a Blessing festival hosts food trucks, music and a visit from a local priest who is also a family friend.

Living and working with nature

While vineyards can be buzzing with visitors for tastings and special events, these often-rural destinations provide a step into the countryside, which can be a welcome relief for city dwellers wishing for a quick getaway.

“I spent most of my adult life in Columbia, and your neighbors are two feet away from you and you can’t see the stars,” LaBarre said. “(Now) I got cows as neighbors and I can see the stars.”

A thick forest frames the Enoree River Winery vineyard, and the cows next door can hardly be seen — or smelled — through the nettles. A wooden wedding pavilion rests at the far end of the vineyard, and the tasting room and winery come complete with an open-air porch and rocking chairs.

The LaBarres’ pet dogs and cat can often be found wandering the grounds. A few wines have taken their names, like Sweet Tipsy Rose (after their cat, Tipsy) and Dusty’s Road (from their brown dog, Dusty).

When the vineyard isn’t filled with the chatter of visitors, guests can hear the local wildlife loud and clear through the fresh country air. On Sundays, if all the work gets done, the LaBarres sometimes build a fire and enjoy a glass of wine by it.

Deep Water Vineyard is also nestled in a secluded swath of nature. The black metal front gate to the property greets visitors after a 15-minute drive down Wadmalaw Island — a trip set against a distant saltwater backdrop and lined with trees draped in Spanish moss.

The tin-roofed Firefly Distillery rests between the vineyard and the winery’s tasting room, and a porch with string lights spans the two buildings. The yard out back hosts two tree swings and a covered picnic area with cornhole boards. On the vineyard fence’s gate, a painted metal welcomes people to “stomp on in” and see the vines close-up.

Freiwald says that the placement of the vineyard works to his advantage, especially during South Carolina’s unpredictable spring weather.

“We’re actually in a unique location, too, on the island here,” he said. “We get some of the maritime effects just because we have water nearby, and so that helps keep us a little warmer.”

This lifestyle once seemed like the stuff of fantasy to Freiwald.

“It has been a dream of mine. I just didn’t think it would come to fruition this early,” he said.

Wire coops by the parking lot house numerous breeds of chickens, and the roosters’ back-and-forth crowing keep the front yard anything but silent.

Rabbits can be found huddling in a hutch out back, and visitors can meet a goat, a pig and free-running hens in the side garden. Anyone who decides to hop into the vineyard needs to shut the gate behind them — Ida Claire, the resident cow with a name from the Southern saying “Well, I declare,” might be nearby.

Although care for the animals and the vines can be long and difficult at times, the final fruits of his labor make it all worth it, Freiwald says.

“It’s really cool to take something from…seed to berry or from pruning to seeing through a season,” he said, “And then picking it and making wine — seeing something through from beginning to end is really satisfying.

Looking to the future

Richard LaBarre says that while Enoree River Winery’s business is on the rise, it doesn’t come without its challenges.

Enoree River Winery has served as a wedding venue at a pavilion on the far side of the vineyard, so the LaBarres are working on saving up money to build a 5,800 square-foot barn to expand and host wedding receptions and other events.

They also are working on getting signs on the interstate to direct travelers to the remote vineyard.

Freiwald at Deep Water Vineyard hopes to bring in European “vinifera” varietals to start working on Old World flavors. He also wants to partner with Firefly Distillery, home of the popular sweet tea vodka, to create a fortified wine with one of the sweet red blends.

“I think that would be really good if we were to have the distillery make it into brandy for us,” he said. “Then we can bring it back and put it into our wine like a port-style wine."

He also plans to start oaking red wines with wood chips (in lieu of using actual oak barrels), which adds a bitter, acidic quality to the wine called “tannin.”

“There’s a lot of things that we’d love to experiment with,” he said. “And it just comes down to time and space and money.”

Enoree River Winery, at 1650 Dusty Road in Newberry, is open Thursday through Saturday from noon until 6 p.m., Sundays from 2 p.m. to 6 p.m. and Monday through Wednesday by appointment.

Deep Water Vineyard, 6775 Bears Bluff Road, is open to the public Wednesday through Saturday from 10 a.m. to 6 p.m.

Explore the ambitions of the next generation of winemakers in part three.