The Gamecocks Continue to Dance - DatelineCarolina 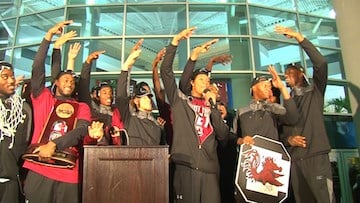 The Gamecocks continue to dance, headed to the Final Four 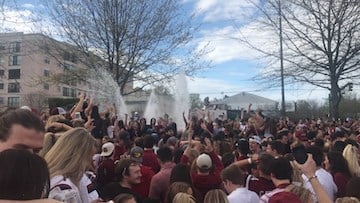 After the Gamecocks defeated the Florida Gators, the fans jumped into the Five Points Fountain. 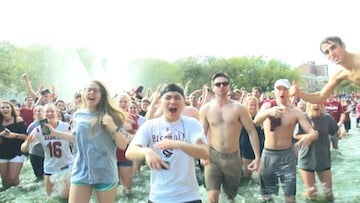 Students once again found their way back into the Thomas Cooper Fountain. 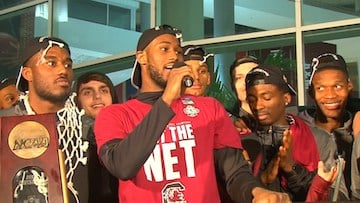 The clock has not hit midnight yet for this "Sin"derella team. The South Carolina Gamecocks are going to their first Men's Final Four ever. The game might have been played in Madison Square Garden, but the real place to watch history be made was in Columbia.

Fans flocked to their favorite Five Points bars to cheer on their Gamecocks and, when the game clock hit triple-zero in New York, the party started everywhere in Columbia.

Fans brought traffic to complete stop as they left the bars and took to the streets. Some even decided to cool off in the Five Points Fountain.

On the campus, the students were just as wild. The usual quiet area surrounding the Thomas Cooper Library was once again invaded by rowdy students. They jumped into the Thomas Cooper Fountain for the second weekend in a row.

Many students were just shocked to see their team advance to Final Four. One student was so stunned he was asking to be pinched. Students and fans danced well into the night as they welcomed the East Regional Champion South Carolina Gamecocks back to the state.

"The support were seeing right now is unbelievable...From the people still in New York to people that are here right now, y'all have been tremendous all season the four years I have been here. Go Cocks!" said McKie.

The Gamecocks will meet the Gonzaga Bulldogs in Phoenix, Arizona for their Final Four matchup. Many fans will be following them to the game.