This one's 'Four' the fans - DatelineCarolina 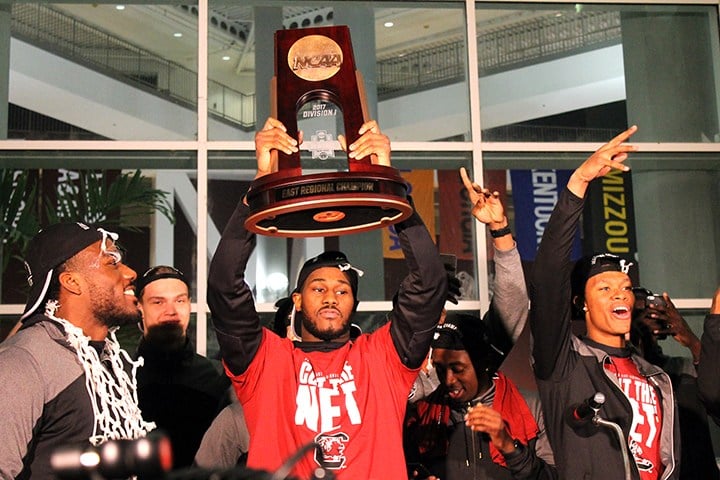 This one's 'Four' the fans 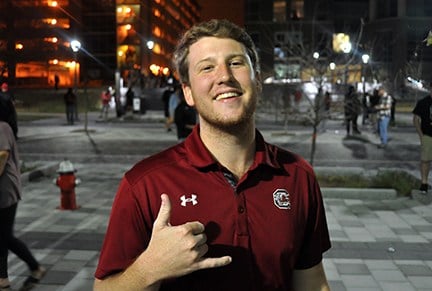 USC senior business student Josh Birkbeck said watching his Gamecocks advance to the Final Four was a dream come true and he’s glad he stayed in Columbia to enjoy the victory with his fellow students. 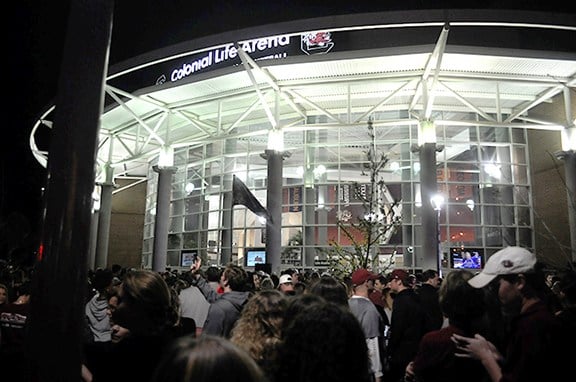 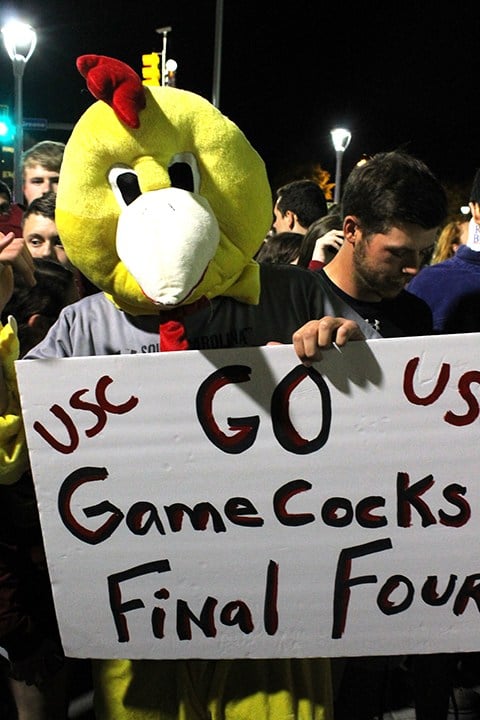 USC student Matthew Weathersby left his job at a local wing bar to watch the Gamecocks return. He dressed as a chicken because he was “just fillin’ in for Cocky.” 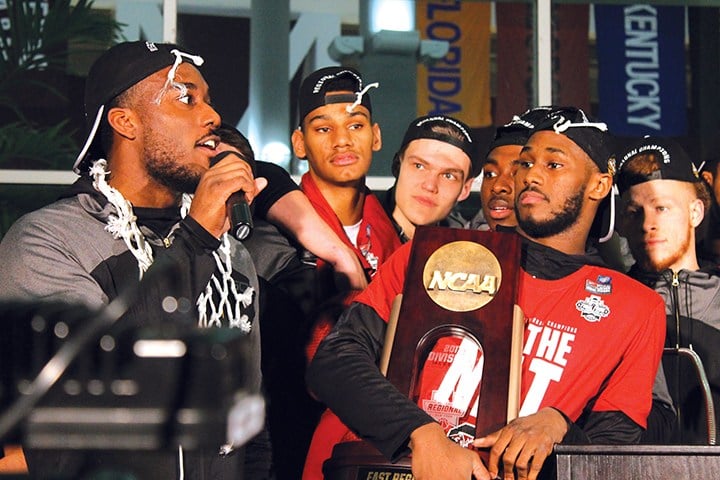 Senior guard Duane Notice only scored six points in 38 minutes of play against Florida, but delivered the game-clinching dunk with 11 seconds left. Notice told the Gamecocks fans “We play for you guys.” 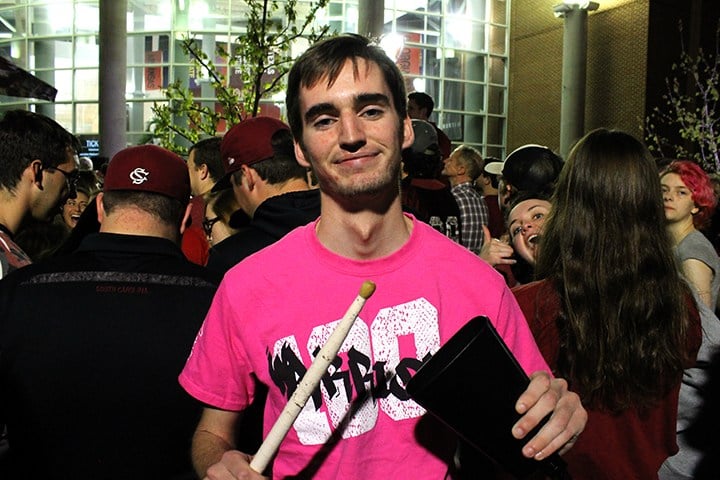 Drummer Pete McMahon brought his cowbell to the rally and began a “Go Gamecocks” chant while the crowd awaited the team’s arrival.

Gamecock fans young and old showed up to welcome the players home. Festive flags and costumes dotted the buzzing pool of garnet and black as revelers awaited the team’s scheduled 10 p.m. arrival outside of the Colonial Life Arena.

The welcome party capped a day of exuberant celebrations of ecstatic USC students jumping into the Thomas Cooper Library fountain and storming the streets of Five Points following the 77-70 victory. Images of the celebration flooded social media.

Murphy Cook, a fourth-year experimental psychology student, didn’t think she would experience a party of such epic proportions while at USC.

“When I came for freshman orientation, they were saying when things get exciting people jump in the fountain, and I was like, ‘Well, that’s never going to happen while I’m here,’” she said. “And it did.”

Cook brought her dog, Bogey, to Colonial Life Arena and dressed him in his own Gamecock gear to share the school spirit and excitement.

“This is the best thing that’s happened since I’ve been here,” she said.

Josh Birkbeck watched the fateful game in Five Points and saw firsthand just how cocky fans got in their post-game celebrations.

“There were people taking running jumps into the fountain, and I saw two dudes walking down the street with a couch to burn,” he said. “Our recliner is definitely going up in flames when we win on Saturday.”

The commotion outside Colonial Life Arena drew families, students and more to try to catch a glimpse of the team. While much of the crowd squeezed itself into the courtyard by the glass doors for a front-row view, other fans climbed onto low walls and took turns sitting on shoulders.

Phones popped up from the tight crowd like periscopes to capture precious live stream moments and Snapchats. Those who arrived a little later found spots on the Discovery parking garage, and a few drones captured a sky view of the excitement.

Matthew Weathersby had his own bird’s-eye view from the ground, as he showed up dressed as a chicken with a Final Four sign in hand. His manager at a local wing bar let him leave work early for the win.

“I’m just fillin’ in for Cocky until he gets back from New York,” the 20-year-old transfer student said. “I don’t plan to steal his position!”

As the clock passed 10 p.m., USC President Harris Pastides took the podium to keep the crowd’s energy high. But once it hit 11 p.m. with no sign of the team, people started to leave. The cheers became less frequent, and open pockets formed in the once-impenetrable crowd.

Ten minutes later, cheers erupted from the front doors of Colonial Life Arena, and a stampede of fans from the outskirts of the crowd rushed in to finally see the team. After Pastides and athletic director Ray Tanner spoke, men’s basketball coach Frank Martin finally addressed the fans.

“How ‘bout them Gamecocks?” Martin asked. Fans cheered, screamed and tossed spurs as high as they could reach. “I can’t tell you how exciting it is to come home and see you great fans. Thank you so much … I couldn’t be prouder of this group."

“Through our ups and downs, you’ve been here for a long time,” he said. “We play for you guys.”

Scott Newman had been waiting decades for this milestone in the program. He watched the game against the Gators at his brother’s house, and the win was an emotional one for them both.

“We’re longtime Gamecock fans. I saw John Roche play right over there,” Newman said, referencing the NBA player’s time at the Carolina Coliseum in the 1960s and 1970s. “I never thought we’d get to the Final Four. This is special.”

Newman admitted that while the older fans were a bit outnumbered by the younger ones, it was still a time no Gamecock men’s basketball fan will forget anytime soon.

“This is magical. These guys are having the best days of their lives. This is great,” he said.

After the event — which included numerous chants to cancel class the next day — some students were ready to head down to Five Points to keep the celebrations going. But for many of those who had been partying all day for the Gamecocks, it was time to head home.

Other Gamecocks were already making plans for Saturday’s game in Phoenix, Arizona, against Gonzaga.

“I bet tickets are gonna be like $400,” Adam Coulter, a fourth-year business student, said. “But my parents said they’d hook me up because the Gamecocks in the Final Four is once-in-a-lifetime chance.”