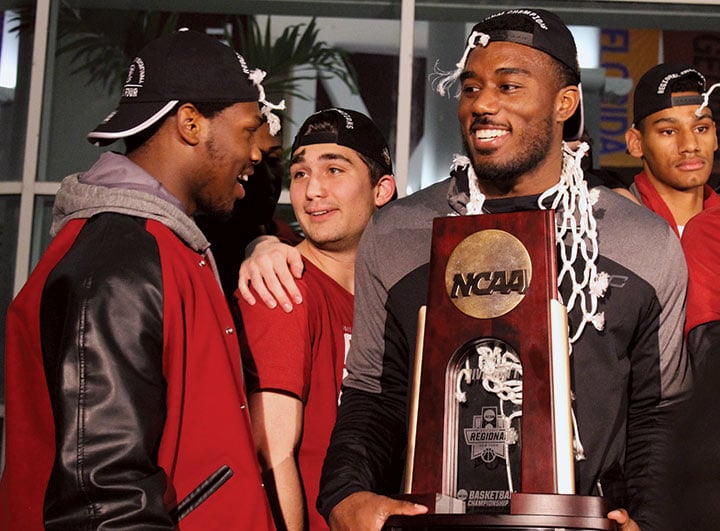 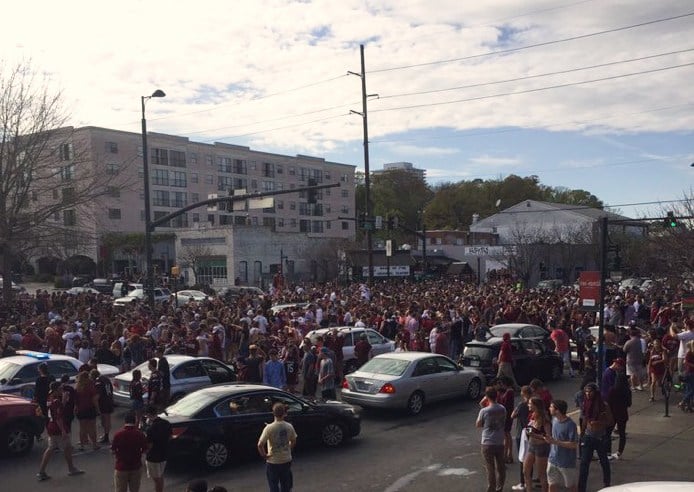 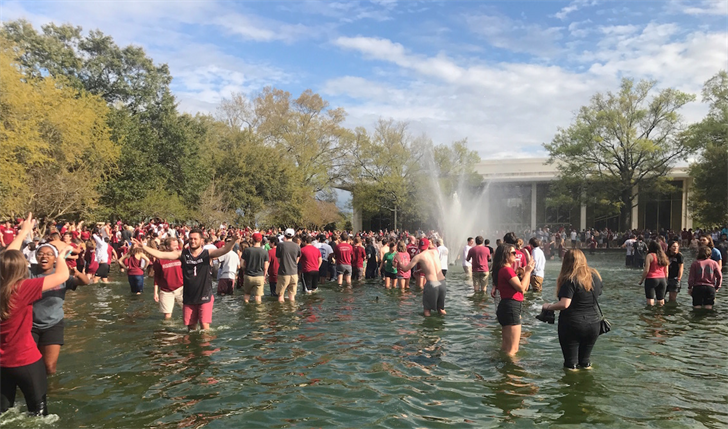 Students swarming the Thomas Cooper Fountian on campus in celebration of the men's Elite Eight win.

Sweet Carolina! Both Gamecock basketball teams are making buckets in the NCAA Tournament.

The No. 7 seed Gamecock men continue to dance as they triumphed over SEC rival the No.4-seeded Florida Gators in a nail biting battle on Sunday. After being down by seven at half, the men rallied to overtake Florida at final buzzer 77-70.

Senior and SEC Player of the Year Sindarius Thornwell continued to prove his value by putting up 26 points, seven rebounds and two steals in Sunday's Elite Eight game. And afterward he added a new line to his resume: 2017 NCAA East Region's Most Outstanding Player.

The game marked head coach Frank Martin's second Elite Eight appearance, giving him a 10- 4 record in the NCAA Tournament. His first appearance was when he led Kansas State in 2010.

Going into the match, South Carolina was a three-point underdog but being overlooked hasn't stopped the team yet. This victory against Florida marks the third second-half comeback win for Carolina in four games. The Gamecocks took down second-seeded Duke Blue Devils to reach the Sweet Sixteen and dominated No. 3 Baylor to set up Sunday's match up with Florida.

Friday night the Gamecocks ran through the Baylor Bears, again with spread favored against South Carolina by three points. After trailing 15-13 with 9:58 remaining in the first half, South Carolina outscored the Bears the rest of the game. Gamecocks celebrated a 70-50 win, giving Baylor their lowest-scoring game this season.

It was Duane Notice's 136th game for South Carolina, the most by one player in school history.

The men haven't made an appearance in the tournament in 13 years and had no wins since 1973. The Gamecocks continue to make history this tournament as March Madness continues to sweep across Columbia.

The ringing of the buzzer could barely be heard through the shouts. Frank Martin threw his arms up in victory, while fists shot towards the sky across the east coast as the clock hit zero. Apparently dolphins are not the only thing that can make Darius Rucker, who was at the game, cry; South Carolina heading to the final four for the first time in history can too.

Waves of people flooded the streets of Five Points in celebration using cars as stages and the streets as dance floors. Water splashed herds of chatting fans as the iconic fountain found crowds circling around for a chance to jump in.

Hundreds of students swarmed the Thomas Cooper fountain on campus, intoxicated by the sweet taste of victory. University of South Carolina President Harris Pastides tweeted he should but upset about the students' swim, but nothing could take the smile from his face.

They're just two wins away from their "Sin-deralla Story." Next up, the men face No. 1 seed Gonzaga in the Final Four next Saturday, marking the first game the Gamecocks have played on basketball's biggest stage.

The Gamecock women also have a chance to make the Final Four, battling Florida State Monday night in the Elite Eight.

The women dominated No. 12 Quinnipiac in the Sweet Sixteen on Saturday in a 100- 58 victory. Carolina quickly grabbed control of the game with an opening 16-0 run.

The victory over the Bobcats also marked the fourth time this season Carolina reached double-digits with three-pointers.

Monday the Gamecocks are favored to win against the Seminoles with comparable offenses, but South Carolina with a stronger defense.

If magic from this weekend continues, both teams could be cutting down the nets next week.