Sriracha: The condiment that became a

Food shoppers may have noticed an abundance of red and green taking over grocery store shelves within the past few years, and it’s not because of Christmas.

Sriracha, a type of hot chili sauce, has become the trendiest condiment phenomenon in recent years, so much so that people are now wearing it as well as consuming it.

The signature red and white rooster logo on the ubiquitous Huy Fong Food bottles has been featured on shirts, socks and even tracksuits. Many retailers now sell miniature bottles fans can carry on their keys, just in case a dish needs some extra spice.

Sriracha was ranked the number one hot sauce in the U.S. on Thrillist, the online food, travel and entertainment website, and ranked Time Out’s top 29. It’s also the top-selling spicy addition on Amazon’s Best Sellers page for hot sauce.

It seemed to spike in popularity around 2013 and shows no sign of slowing down. According to a 2015 Los Angeles Times article, Huy Fong’s Sriracha skyrocketed in sales from $60 million to $80 million in just a two-year span. 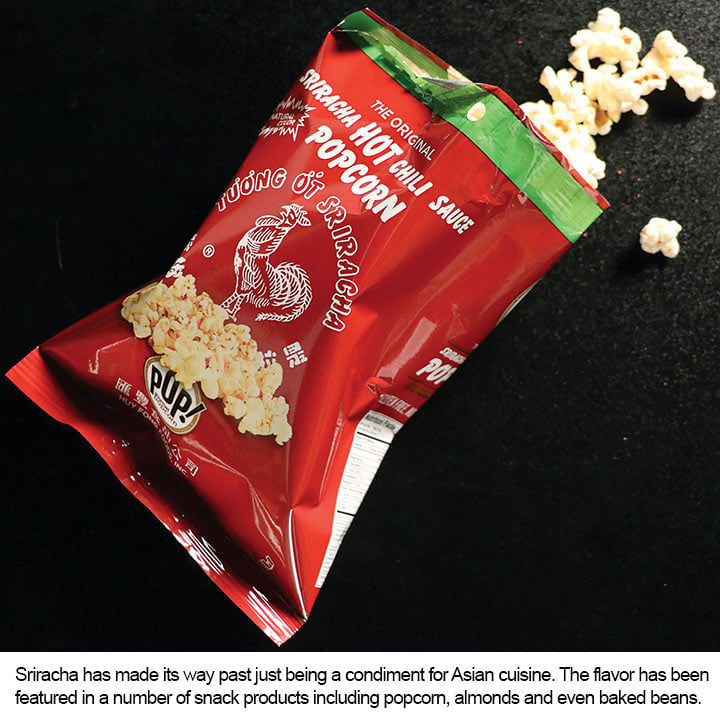 Sriracha’s unique taste comes from a few simple ingredients. The red paste is made from chili peppers, sugar, salt, garlic, and distilled vinegar, and includes potassium sorbate and sodium bisulfite as preservatives and xanthan gum as thickener.

Major food brands have incorporated it into products as well. Cheez-It, Lay’s and Pop! have all flavored their snacks with the tangy hot sauce. Burger King came out with a Sriracha cheeseburger last year, and Wendy’s started topping their chicken sandwich with a Sriracha aioli and infused bun.

Those craving a spicy alcoholic beverage can now purchase Sriracha vodka and beer.

Kettle Brand, a chip company that features a large variety of flavors such as “pepperoncini” and “maple bacon,” recently created Sriracha-flavored chips.

“When the brand launched Sriracha chips in 2014, the top-selling Asian hot sauce was considered ‘the New Ketchup,’” a Kettle Brand representative said. “Kettle Brand’s flavor innovators hopped on the opportunity to replicate the chili-garlic-vinegar taste of the beloved condiment on its classic kettle-cooked chips.”

Although the brand cannot release specific sales numbers, it said it’s one of its top-selling varieties and has a loyal fan following.

The origins of Sriracha are rooted in the journey of inventor David Tran, who fled Vietnam on a Taiwanese freighter called Huey Fong. He began production of his spicy kitchen creation in 1980, calling his company Huy Fong Foods. 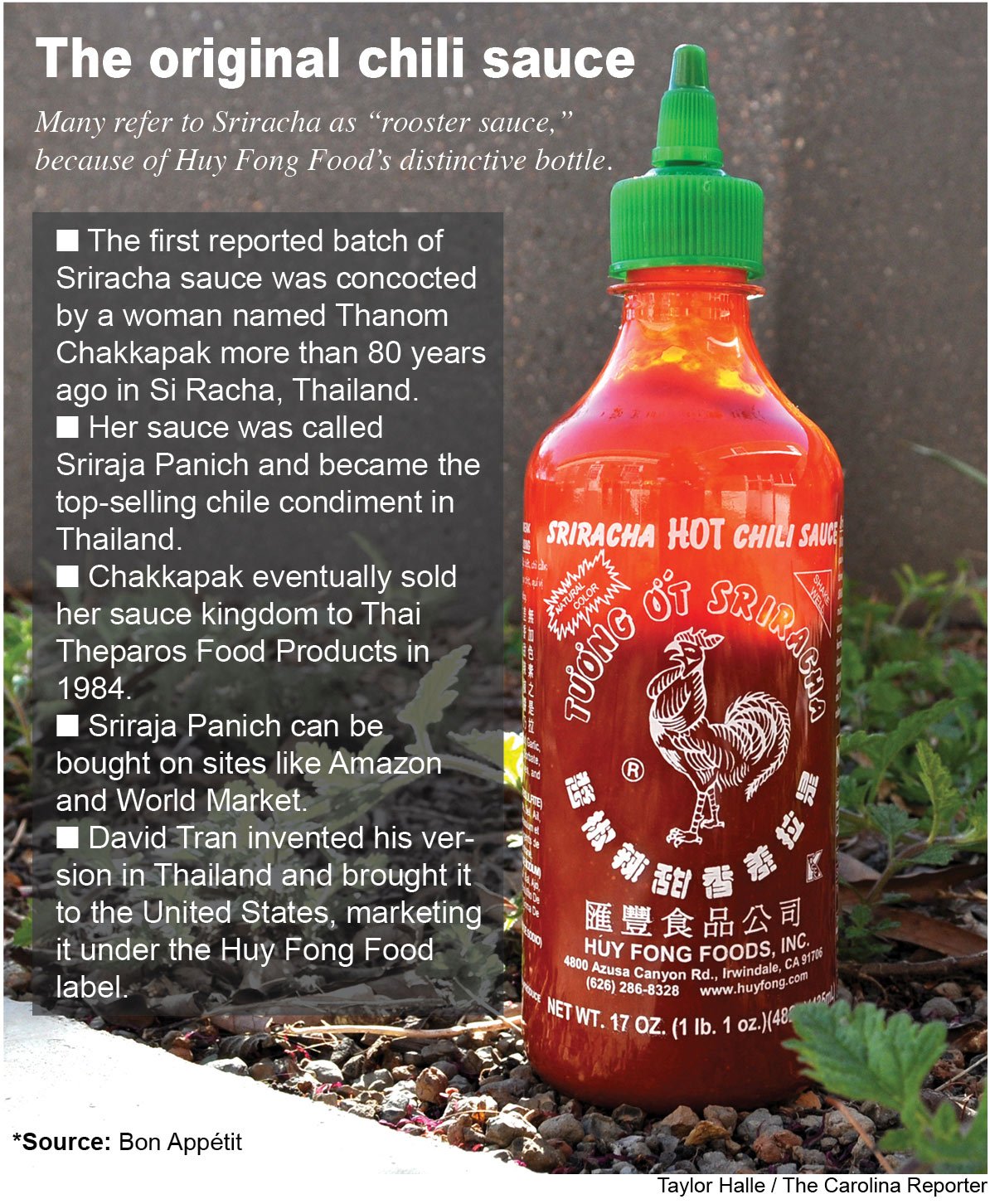 Tran made countless trips to Asian restaurants around California trying to get the rooster bottle on tables, finally ensuring the success of his flavorful concoction.

Today many restaurant tables are home to the red and green bottle. It may seem like the perfect partner for Thai or Chinese dishes, but other restaurants have started pairing it with anything from nachos to burgers.

Wild Wings Café in Columbia, South Carolina, features a “Srirachos” appetizer, which includes Honey Lime Sriracha-dipped chicken and a creamy Sriracha drizzle. The restaurant’s manager, Marty Cox, said he has received a lot of positive feedback about the dish.

“I would say it’s one of the most popular items we sell,” Cox said. He also thinks the company will probably feature other Sriracha-themed meals in the future.

Julie Blevins, a hot sauce “potionologist” and CEO of the Columbia-based Palmetto Pepper Potions, first encountered Sriracha in the late 1990s at a produce stand in Florida.

“It’s definitely got garlic and sugar, so it’s different from your typical hot sauces,” Blevins said. “I would not use it in my own recipes but it’s done well by a number of companies.”

She believes Sriracha has become a widespread foodie obsession because of the unique mix of ingredients.

“I think it’s the flavor profile. Instead of those traditional hot sauces, it adds garlic and sweetness and something more,” she said.

Calvin Chao, a junior at the University of Maryland and devoted Sriracha-user, said his father introduced Sriracha to him when he was a boy.

“When I first tried it I thought it was pretty spicy since I couldn’t handle spicy things when I was younger, but I liked the general taste,” Chao said.

He says he now flavors his food with the spicy concoction every day.

“I guess the particular flavor goes well with a lot of the foods I eat and it’s not as salty as some of the other ones I’ve tried,” Chao said.

But why is Sriracha just now catching on, so many years after its birth date?

“Maybe it’s because we’ve diversified in terms of culture and that comes with the foods so people are trying different things,” Chao said. “With people becoming more diverse it’s natural for them to dabble in the cuisine, thus exposing more people to Sriracha.”