Serving up advice on sports and life - DatelineCarolina 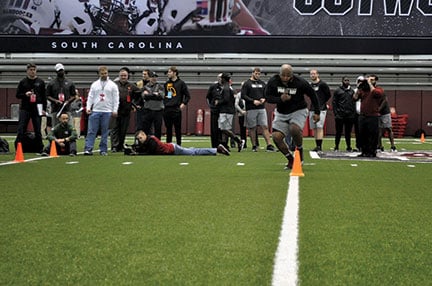 Serving up advice on sports and life 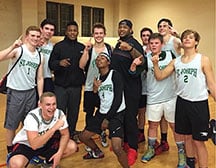 “We went down by 20 in the first five minutes,” Hall said, laughing.

There was a quick timeout and their coach called them over to the sideline to make some adjustments. But there was something different about this team: these were football players and the coach was an SEC defensive lineman.

Kelsey Griffin, a senior at South Carolina, was patrolling the sideline coaching a motley crew of Cardinal Newman football players in a small church league gym.

“The one thing he told us was to ‘get nice,’ to just be better. I’ll never forget that. Whenever we’d mess up, we’d just yell that, ‘Get nice!’”

The group, dubbed the NBA All Stars, was decked out in NBA jerseys and spent more time having fun than winning games, notching just three victories last season.

“Our team was kind of a joke,” Hall, a linebacker and fullback, said. “It was a lot of fun. We thought he would get mad at us because we’d jack up half court shots out of nowhere. But he thought we were funny.”

Griffin, at 6-foot-2, almost 300 pounds, has spent the past two seasons lumbering court side, directing the church league team during games.

But the bond he developed over the past two seasons on the basketball court started months before on the Cardinal Newman football field during a sweltering summer pre-season practices.

Griffin began an internship at the private Roman Catholic school in the summer of 2015, running the team’s workout sessions and setting up the weight room.

On the football field, he forged a relationship with Tringali, Hall and the rest of the team. While he was quiet in the beginning, Griffin eventually became a team favorite, athletic director Will Eudy said.

“He’s one of those big, intimidating football players that you look at and you say, ‘Wow, this guy’s intimidating,’” Hall said. “But at the same time he’s really, really kind, kind-hearted and really cares about you as a player and as an individual. He was always really supportive and push you.”

He worked the past two years in the athletic department taking tickets, counting jerseys and doing any other tasks he was assigned to by Eudy. Along the way, he became a figure that team members admired.

“It’s cool when the parents come up to you and say, ‘My kid talks about you all the time. He’s always talking about you, thank you so much for what you’ve done,’” Griffin said. “It’s kind of cool seeing that.”

Cardinal Newman head football coach Doug Dutton said having Griffin on campus was like having “another coach around.”

“He doesn’t have an ego. He’s not out there beating his chest,” Eudy said. “He’s just a good dude. The kids see that. They see all the charades and they can tell if someone really cares for them. And I think he does.”

What started as an internship turned into a tight bond between a college player and a high school football team. He even showing up to work and running drills with the team.

“We know he’s doing the work, but for him to come out and do it with us just means more,” Tringali, the team’s quarterback, said. “It makes us push a little bit more knowing he’s already done his workouts, running and stuff at 6 o’clock in the morning and he came out here at 8 to be with us when he didn’t have to.”

After his first summer working with Cardinal Newman, he showed up to the team’s first game at River Bluff High School with former All-SEC and Los Angeles Rams wide receiver Pharoh Cooper. That set off a team frenzy.

“I think that’s when they realized he wasn’t just there for credits, that he had taken an interest in them," Dutton said.

Griffin’s playing days at South Carolina are over, but another challenge looms: the prospect of the NFL Draft.

He worked out in front of pro scouts at South Carolina’s Pro Day Tuesday with one of his last chances to impress teams before the NFL Draft in April. Griffin registered 32 tackles and two quarterback hurries his senior season.

Even with his time consumed by his attempts to make it a professional roster, Griffin still finds time to coach the Cardinal Newman players.

“I always tell the kids I work with there that if you want to get anywhere in life you got to progress and you have to work hard,” Griffin said. “Every day is going to get you a step closer to your dream.”

And if he doesn’t make it at the professional level, Eudy thinks there’s a spot for Griffin on a coaching staff.

Dutton agrees, saying he’s a coach and mentor “everyone wants to be around.” While Griffin said coaching is not his first or possibly second option, he doesn’t rule out the profession later in his career.

“He has an ease with kids that comes naturally to him that other people work very hard to master,” Dutton said. “With his knowledge and background he would be a tremendous coach. I’d love to have him. Anyone would be very lucky to have him as part of their staff.”

For now, there won’t be any more church league games, and less time at football practice. Griffin said if he’s not busy he might help out during Cardinal Newman’s spring practice, but right now he hopes to be on a pro roster.

He leaves Cardinal Newman bearing the title of mentor and friend.

“That guy means the world to me,” Hall said. “He’s a great people person, a great guy. Any person he comes into contact with, if you ask anyone, he’ll make a big impact on their life."