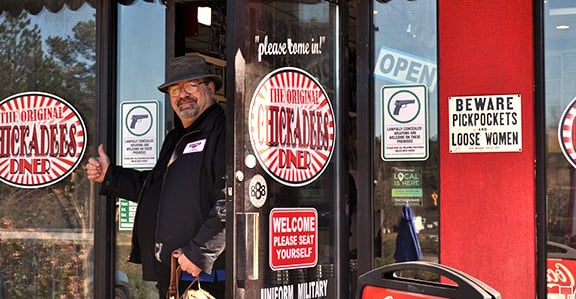 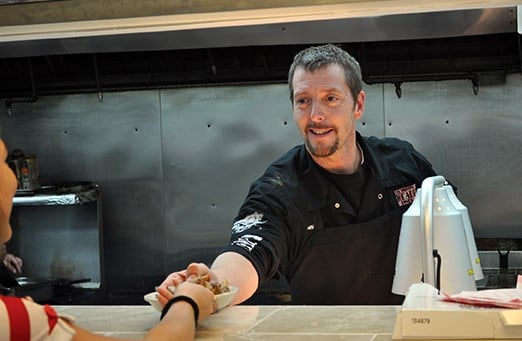 The owner of a Columbia restaurant who allows patrons to carry concealed weapons humorously suggests his waitresses could be the first in Columbia to tote guns on their hips if South Carolina lawmakers pass a true “open carry” law.

Jeff Diehl’s red-and-white striped,1950’s-themed diner, Chickadee’s, offers a family-friendly atmosphere, but with the small catch that a surrounding patron may be carrying a concealed weapon.

“We embrace CWP (concealed weapon permits) and there are people who eat here because of that,” Diehl said. “There are also people who don’t eat here for the same reason.”

Diehl says he doesn’t have a position on the current proposal, but exercises his right to carry.

The legislation winding its way through the South Carolina House of Representatives would allow South Carolina gun owners to openly carry a handgun, known as “constitutional carry,” without a permit.

“My definition of constitutional carry is the right to carry a firearm without a government permit,” said Rep. Mike Pitts, R-Laurens, the bill’s sponsor.

Pitts was previously opposed to open carry, but after listening to some of his constituents he changed his mind. Three other southern states, Mississippi, Alabama, and North Carolina have recently passed similar laws

“I’ll give our people a choice,” Pitts said.

Pitts anticipates that legislation would be altered to require formal firearms training if it passes through the House and the Senate. The Senate has killed the bill twice in the past.

He also believes in having the proper training when dealing with firearms because of his experience in law enforcement.

“If you are a gun owner, you should have the proper training at the point of purchase,” said Pitts.

Pitts and others have voiced concerns about firearm retention because most gun owners don’t go through the same training as the military and law enforcement. He worries that an inexperienced gun owner could lose possession of his gun during an altercation.

Billy Griffin, who has taught National Rifle Association classes and been a concealed carrier for 40-plus years, says he is against the open carry proposal because there is no training component. As an instructor, he teaches proper technique, training, and attitude.

“if you don’t have a safe attitude, the rest doesn’t matter,” said Griffin, of Chapin.

Griffin believes that any concealed weapon carrier has a major responsibility. In all the years of carrying a concealed permit, he said he can count on one hand how many times he’s had his firearm on him going anywhere besides the gun range.

“Open carry is an intimidation to a lot of people and there are a lot of people who don’t like guns and are scared of them,” Griffin said. “It’s sort of bragging or showing off when a person is sitting there with an unconcealed gun on their hip.”

Griffin’s view on constitutional carry is logical and simple.

“I believe before you purchase a handgun, you should have to take a test, and not only written, but in proficiency.”

Gerald Stoudemire, who heads Gun Owners of South Carolina, an organization affiliated with the National Rifle Association, said he has mixed feelings about the legislation.

But he is adamant that gun owners need to be educated and trained to use their firearm regardless of how familiar they are with guns.

“Everyone thinks they are a master,” said Stoudemire.

Stoudemire made an analogy to owning a chainsaw.

“It’s like buying a chainsaw and giving it to just anybody,” said Stoudemire.” “You could give it to someone who could do real harm because they don’t know how to use it properly, or that person could possibly be a lumberjack and would know how to use it correctly.”

Maryliz Grigg, a spokeswoman for Moms Demand Action in Columbia , said the proposal bill could put guns in the hands of the wrong people.

For the moment, Diehl, the Chickadee’s owner, is simply watching the debate unfold from behind his restaurant counter.

Diehl understands the tension between responsible and active gun supporters like himself and those who have worries about the proliferation of guns.