Boy It's Warm Out There! - DatelineCarolina 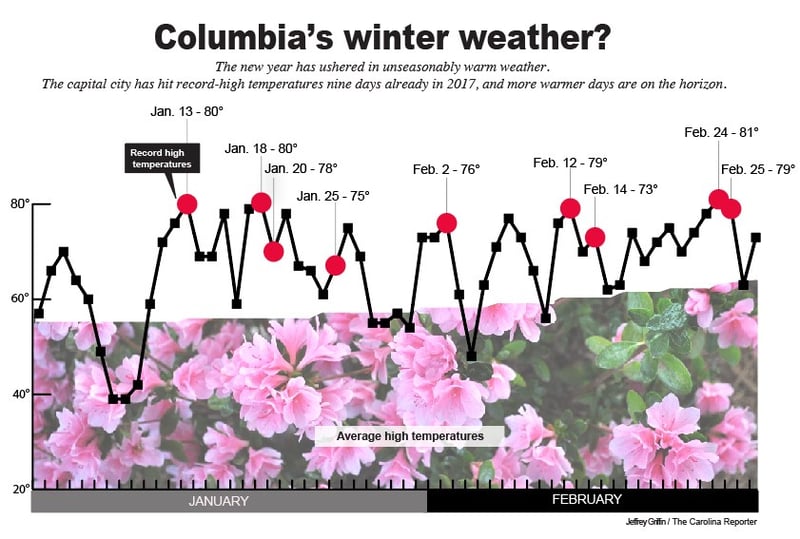 Boy It's Warm Out There!

By Parks Beson and Jeffrey Griffin

Spring is coming early in the Palmetto State, with record high temperatures recorded in January and February.

Students are trading in their coats for shorts and tank tops as temperatures of 70 degrees and higher hit the Midlands and the coast. While Punxsutawney Phil on Groundhog Day predicted six more weeks of winter, it looks like Mother Nature wants South Carolina to feel the heat.

Joe Harrellson, a junior cardiovascular technology student at the University of South Carolina, laid in his ENO hammock in the morning sun Monday and marveled at the warmth.

“I am from Spartanburg so it is a bit unusual that there is a bit warmer weather now than there should be. It’s crazy that it will go from 85 degrees one day and then it will immediately go down to 40 the next,” Harrellson said. “I don’t know how to dress.”

Within a month, the historic Horseshoe at the university has gone from bare and drab to colorful and lively, with students lying out and studying, or running or tossing a football.

South Carolina has seen unusually high temperatures during these first two months, including nine record-setting days that have gone into the mid 70s and 80s. The average temperatures for these months hover around 55 degrees.

“I’m from New England so I’m used to weather changes but even this is ridiculous,” Bridgette Conley, a freshman at USC, said. “I think it is definitely due to climate change but I am enjoying the warmer weather.”

Both Harrellson and Conley say that they believe the warm weather is here to stay and that spring will definitely arrive early this year. According to WIS meteorologist Ben Tanner, this is the fourth warmest winter season on record for the state of South Carolina.