So you want to run a marathon: Training and fueling your body - DatelineCarolina 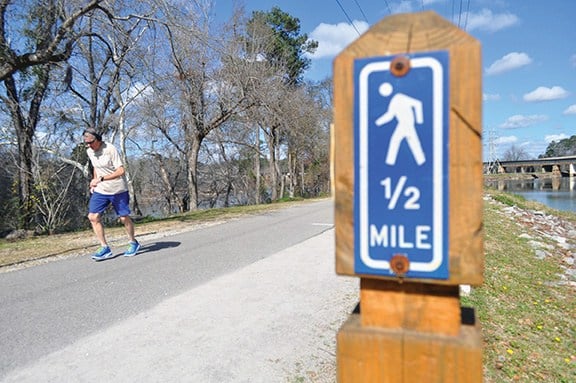 So you want to run a marathon: Training and fueling your body 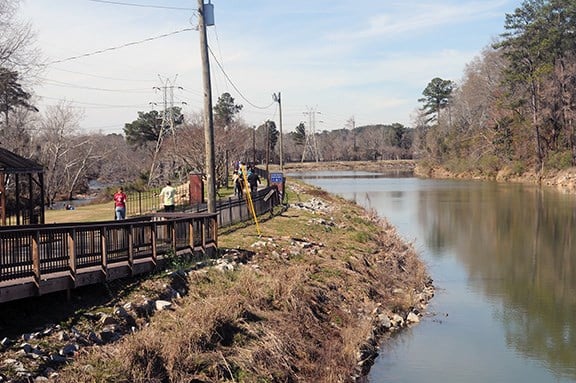 Columbias Riverfront Park is a popular paved 5-mile path along the Congaree River. It is used by walkers and joggers training for big runs. 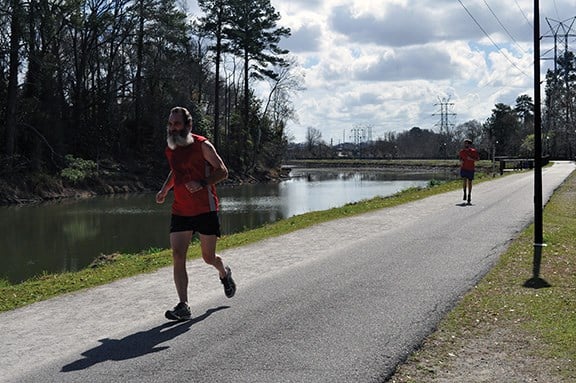 Cloudy days and cool temperatures are best for elite runners.

Grant Gibbs, a 20-year-old at the University of South Carolina, trains for his half marathon at 7 a.m. 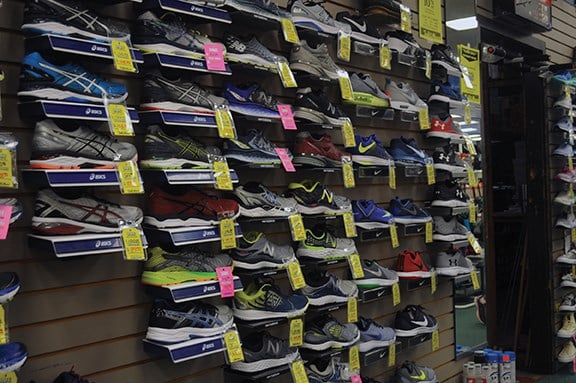 There are a wide veriety of running shoes that cater to the many kinds of foot type, from the stable runner to the flat footed runner. 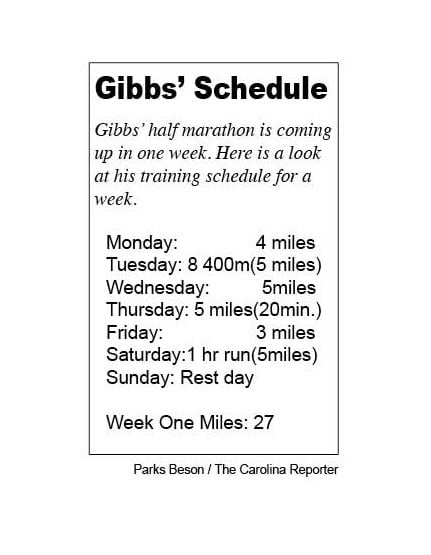 A look at Gibbs' training schedule

So you want to run a marathon.

Many people do and many people begin with no knowledge of how to train for the 26.2-mile trek. Every elite runner has been there. Dr. Ward Katsanis remembers when he was a novice on the marathon scene.

“Although it was my first marathon I adhered to the slow steady increase in mileage to avoid injury,” Katsanis said. The challenge was learning to hydrate and eat throughout.”

For the 53-year-old doctor, husband and father, the training began in 1993 when he was just 29 years old.

“The one thing I regret not knowing before that first race was to use more Vaseline and to put Band-Aids on my nipples. Boy, that hurts.”

Between his demanding works as a gynecologic oncologist in Charleston, Katsanis still finds time to run each day. Marathon training, along with any run, starts with making time to run and just doing it, he said.

It is tough to remember every race after all those years, but Katsanis calculates that he has run 15 marathons over the two decades. in total. Each of them, he said, proved to be a mental challenge.

Along the 26.2 mile route during his first marathon, Katsanis had trouble and doubts around the 16th mile.

For him, Katsanis said that the marathon starts months before the first mile, with intensive.

“A lot of training and conditioning goes into marathons,” Katsanis said.  Twenty-minute runs turn into runs that can last three to four hours, starting early in the morning at 5:30 am.

All of these runs are not the same, according to Katsanis, with varying speed and difficulty. Katsanis says that there are three kinds of runs that should be touched on during training, building up to running close to the mileage that is the marathon.

“So you got three runs during your training period. You got your short runs, fartliks, and long runs,” he said. “Short runs, meaning running a little under your maximum miles for the week, a long run, usually one day where you run the maximum amount of miles for a run that week. A fartlik, f-a-r-t-l-i-k, is a run where you try to get faster for every mile that you run for that day.”

All this training for a four-hour run and a beer at the end. But Katsanis loves the feeling of crossing the finish line.

“It is a great accomplishment, the sense of achievement is huge,” said Katsanis. “Friends and family have supported you and helped you train, but at the end of the day, no one ran the race but you.”

A fit sole and healthy food

Grant Gibbs, junior public relations major at the University of South Carolina, began his running career in high school. There he ran with his cross-country team and ran a half marathon coming out of high school.

Even though he hasn’t ran in the granddaddy of races, Gibbs that his training is similar to that of the marathon runner.

“Training for a half marathon is similar in the sense that you have to be physically and mentally in shape. You have to watch what you eat and eat a lot of it, because of the amount of calories that you are burning,” he said. “As long as you can push yourself over 10 miles regularly, you can run a half marathon.”

A half marathon is 13.1 miles, because it is - you guessed it - half a marathon. Usually, a runner will attempt to run a half marathon before he or she tackles the full 26 miles.

Running every day with the team took a toll on his sole – his shoe’s sole to be exact. Gibbs says that one of the most important aspects to training is finding the right kind of shoe for your feet. Gibbs says, for him, it is more about comfort and features than style and cost for him.

“I just got my shoes off of Amazon but it is very significant that you find shoes that are adaptable to your feet, Gibbs said. “People often try to buy the most expensive running shoes with a lot of support, but actually the better running shoes are the ones with less support and additional features because they allow you to run more naturally. You run best when your feet are in a more natural state.”

While mind and external body are important factors in the journey for the hardware at the end of the marathon, the internal body should be taken care of too.

Matt Bernthal, a University of South Carolina sports and management professor, knows about the importance of dieting and eating healthy.

“I don’t eat junk food, by any means. If I snack, it’s usually fruit or a Cliff bar,” Bernthal said. “What you eat right after you run is very important. Whatever I eat right after needs to be flushed to a four to one, carb to protein ratio. Egg sandwich on wheat toast or peanut butter on toast with a one percent chocolate milk is a good snack.”

Bernthal says that between dieting and training, running has become a lifestyle, with his family supporting and encouraging him along the way.

“My life hasn’t really changed because I already eat healthy and try to stay in shape,” Bernthal said. We try not to eat too much junk food and my family has always been active. They are fine with all the running that I do.”

This lifestyle is not one to be taken lightly, Bernthal said. At times, the time and effort that he puts into a marathon has made him feel like he does not have a life. This makes the decision of what distance to run a lot easier.

Both the half marathon and marathon take time and effort for the runners and the people supporting them.

Diet and exercise is very important as well as being in a healthy mental state throughout the training. It is a long journey and a big goal to achieve, taking a combination of body, soul, and mind.

But the end result is one that Katsanis can sum up easily.