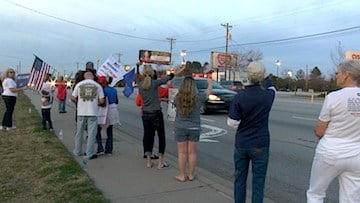 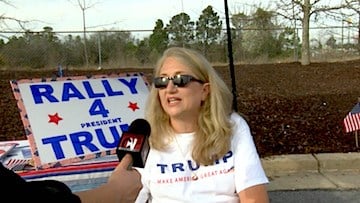 Rally organizer Monica Schmitz says that as a veteran she feels compelled to support the "commander in chief".

As the word got out, Donald Trump merchandise was set up at the rally.

President's Day, a time to honor presidents past and president, was a day of mixed emotions. Thousands of people across the nation protested President Donald Trump's policies, but some people in the Midlands wanted to make a different statement.

Lexington County is one of the most conservative counties in the state, and about 60 people gathered to show their support and endorsement for President Trump. People of all ages held up large signs, urged car honks, elicited chants and cheers, and sold Trump merchandise until sundown Monday.

Many knew about the event through a Facebook page created by Navy veteran Monica Schmitz and two army veterans, Shawn Herzog and Chase Brown. The three originally planned to get together and hold up signs for Trump on President's Day, but the group grew larger than they expected.

They wanted the rally to be "free of negativity" and asked Lexington deputies to come to ensure people would be civil.

"As a veteran, we follow [the president] no matter who it is. Right now it's President Trump and we need to back him," she says.

Some drivers stopped to join, others joined after hearing about it on the radio. Schmitz changed the name of the Facebook page from "Rally 4 Trump" to "Rally 4 President Trump Continues" so it can be a platform for people to share information about future rallies.

She and the other organizers plan to attend a "March 4 Trump" demonstration on March 4 at the South Carolina State house at noon.