Adoption bill could change relationships between adoptees and th - DatelineCarolina 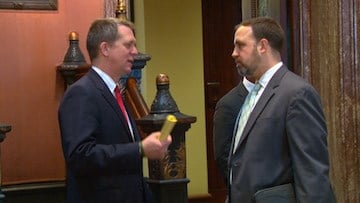 Adoption bill could change relationships between adoptees and their biological parents 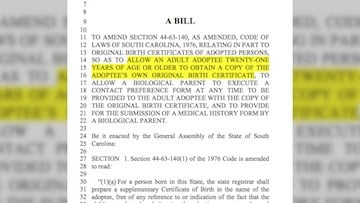 State lawmakers are debating a bill that would allow individuals who are adopted access to their original birth certificate. 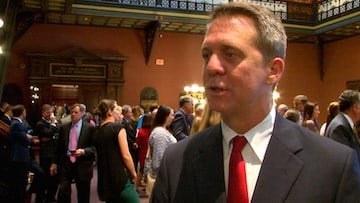 A bill has been presented to the South Carolina House that would allow people who are adopted to gain access to their original birth certificate after turning 21.

One person who is interested in the bill is Carol Miner. She's originally from Greenville and has seen her fair share of change.

"My father was in the military and we moved all over the place," said Miner.

If constantly moving wasn't enough to deal with at a young age, she found out that she was adopted.

"I'd known always growing up that I was adopted," said Miner. "My parents always told me that and I do have the name of my biological father but I haven't met him but I have met my mother. It answered a lot of questions for me as far as who did I get this from, who do I look like. Those are questions all adopted children have."

Questions that could be answered at the statehouse soon. Bill Supporter, Rep. James Smith from Columbia, says he understands the concern that some biological parents may not want to be contacted.

The bill would give biological parents the opportunity to request a contact preference form from the state registrar where they can indicate whether they would like to be contact directly, through an intermediary source, or not at all.

Smith believes this bill would only allow mutual connections between both parties and could benefit one way or another.

"We want to be careful but it can only end up in those opportunities for a reunion where both sides are interested in it," said Smith. "It's just balancing those rights, the interest of the adoptive child know their medical history and know something about where they came and then parents who have given up a child for adoption also being able to protect their own privacy."

Miner is adopted but she understands the other side of the situation.

"When somebody puts somebody up for adoption, it's not an easy decision," said Miner. "It's really is heart wrenching and some people have it the rest of their lives."

Miner wants to see this bill help build relationships that otherwise wouldn't have been possible.

That information could help provide medical information for those that are adopted while maintaining the privacy of the biological parents that could create relationships down the road.