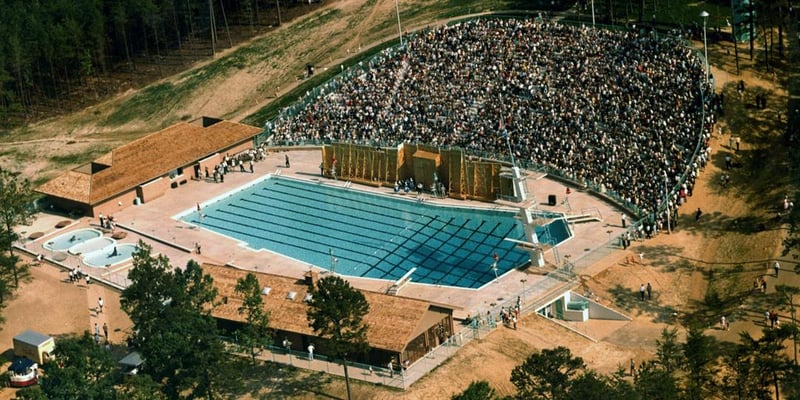 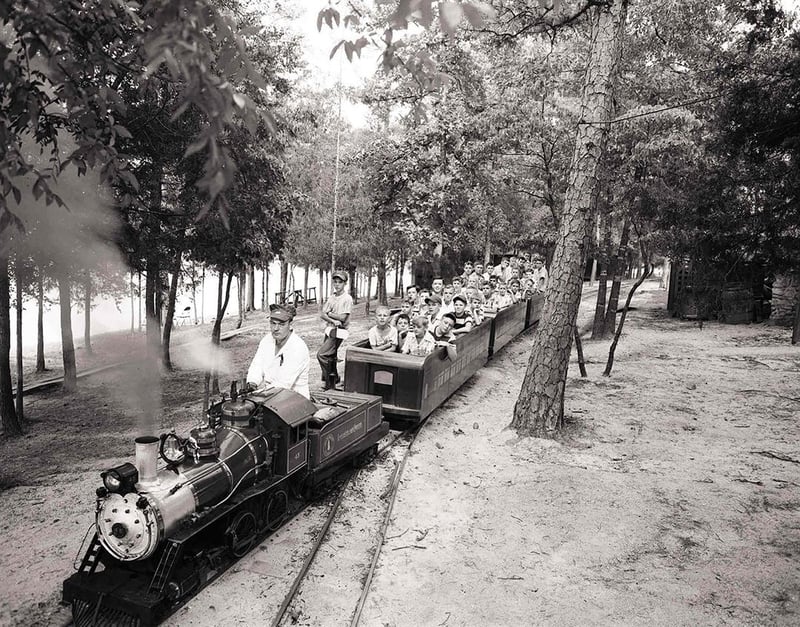 Children catch a ride on the steam propelled train that rounded the park. In this 1967 photograph, Joe Childers mans the engine car. 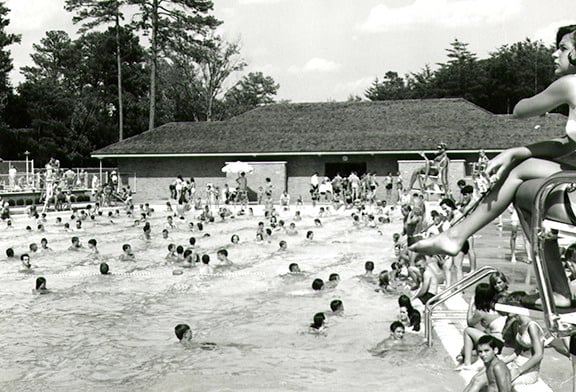 Springs Park swimming pool on a crowded day in July 1965 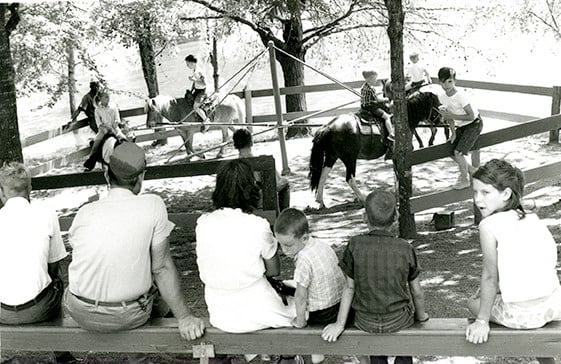 Children enjoy pony rides at the park on May 1967. This opening weekend saw an estimated crowd of 7,500. 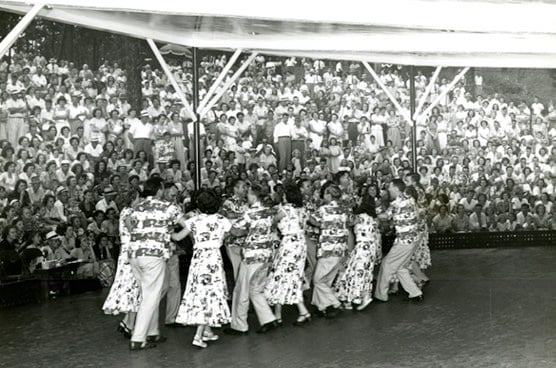 Springs parks goers wearing Springmaid shirts and dresses during a square dancing demonstration. This photograph was taken circa 1950. 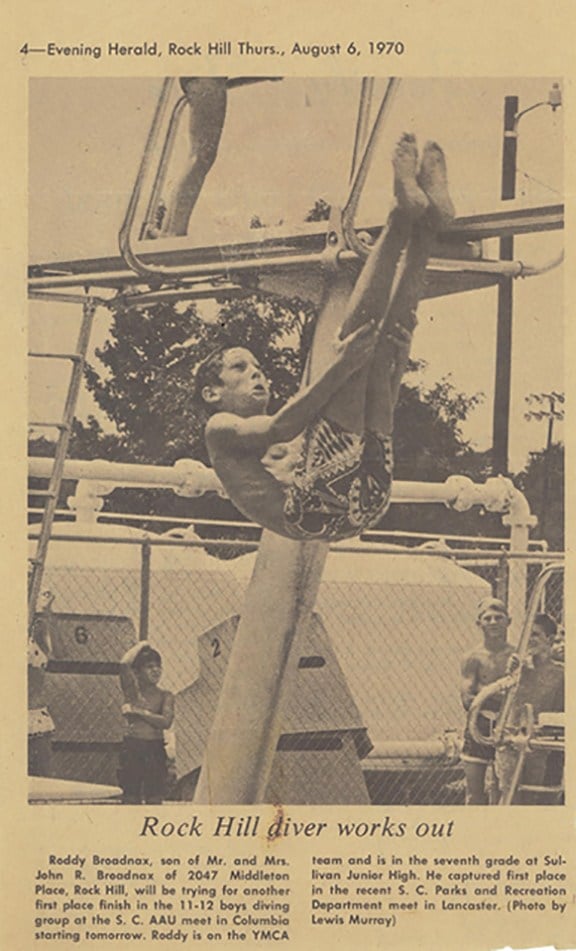 A young Roddy Broadnax performs a dive in 1970 at Springs. This newspaper clipping is a feature on Broadnax's 1st place finish in diving in South Carolina.

Just a mile outside of the small city of Lancaster where empty storefronts line Main Street, an abandoned park serves as a reminder of a time when American textile factories were thriving and small town workers had a grasp of the American dream.

From the 1940s to 1989, Springs Park was the place to be with merry-go-rounds, snack bars, steam-propelled mini trains, hiking trails and campgrounds surrounded by a beautiful, lush landscape and bordered by the Catawba River.

Col. Elliot White Springs, son of Springs Mills founder Leroy Springs, created the park for the mill workers and their families who powered the textile giant into one of America's most formidable corporations during the midpoint of the 20th century. In its heyday, Springs Mills Inc. employed thousands and operated the world’s largest textile plant under one roof, sending its trademark Springmaid sheets and other cotton products around the world.

The park was the workers' playground. Mill families from Lancaster and surrounding mill towns splashed in a crystal blue pool, roller skated in the shade and enjoyed concerts that drew thousands to hear such country music greats as Patsy Cline, Dolly Parton and Buck Owens.

Ann Evans, archivist of the Springs Close family and a Lancaster County historian, recalled Col. Springs was so concerned about the welfare of his workers, he cancelled Johnny Cash’s performance because Cash had been arrested on a marijuana charge and he didn’t want that to reflect on his company or his employees.

Jane Murray, who lived in nearby Chester for 56 years, says the region was never the same after the factory industry started crashing.

“People were happy with so little back then,” said Murray, who recalled taking her children to the park on Sundays.

The park held beauty pageants where contestants from nearby towns and mills competed in hopes of becoming an infamous Springs Maid advertisement girl. Murray become one, she said, posing for a printed advertisement that became controversial in its time for its hint of risqué behavior.

“My father had a fit after seeing the ad,” said Murray, who was only 20 years old when the ad came out.

Now, as the national conversation turns on factory towns left behind by globalization, and President Trump vows to bring back new industry and commerce to these hard-stricken communities, those who remember Springs Park are reviving it, but only in memory.

Hundreds of Facebook users flood the page, “I remember Springs Park,” with memories, photographs and even a couple of grainy Super 8 film videos.

Kudzu and a rusting high dive

Along S.C. highway 200 a small green sign with white lettering reads, “Springs boat landing” where the entrance of the park used to be.

On the roadside that leads down to the shore of the Catawba River, there are two graffiti-plastered concrete barricades with posted “no trespassing” signs.

A short walk through a thicket of kudzu and overgrowth leads to a view over the top steps of the amphitheater that overlooks the giant, graffiti-covered pool.

A mural of Abraham Lincoln painted on the steps of the amphitheater is no longer visible due to years of weathering.

Rotting wooden structures that once were buildings filled with the cheer and laughter of children are no longer recognizable.

In the deep end of the pool, the once state-of-the-art high dive sits on its side rusting over with trash that has accumulated since the park’s close in 1989.

The park was originally purchased in 1929 from the Duke Power company by WWI ace pilot Colonel Elliot White Springs, son of the Springs Mills textile company founder. The 160-acre park officially opened in 1946 for the enjoyment of his mill workers and their families.

Open day ceremonies drew in the biggest crowds typically with popular musical acts along with the various attractions. The biggest opening day saw a crowd of 25,000 in 1951. Over the years, as the mills were struggling to keep the number of workers employed, the opening ceremony crowd numbers dwindled with 1971 being the last year the park held the event.

During World War II, the company supplied fabrics for tents, uniforms and various war supplies. After the war, the company shifted towards marketing their bed sheets and other apparel materials. The company was still running their pin-up girl advertisements in a plethora of magazines. Over years of acquisitions, mergers and competing with cheaper foreign labor, the area fell victim to changing times. The last Lancaster mill closed in 2007 after the family sold the company to a Brazilian firm.

Final days of the park

The opening of the giant theme park Carowinds in 1973 just over the border in Charlotte, N.C., played a part in the decline of Springs Park. The pastoral Springs Parks couldn't compete with Carowinds' massive roller coasters and stimulating themed rides.

After Hurricane Hugo in 1989, the Springs company decided to close the park and auction off what the park still had to offer. The cost of repairs to the park were seen to be too costly and Duke Power, who leased the land to Springs, had doubled the rent.

When Roddy Broadnax, learned of the park's planned closing in 1989, he drove to Springs for one last dive. He says he even paid the teenage lifeguard at the time to take the last dive before Hurricane Hugo demolished the park.

Broadnax, 59, of Rock Hill,  had claimed the gold medal in diving in 1970 on that same high dive some many years earlier.

“Our Rock Hill YMCA swim team swam against the Springs teams from Fort Mill-Lancaster and Chester in heated competition,” Broadnax recalled. “Our Rock Hill coach was Tim Welsh who went on to coach at Notre Dame and retired as the most victorious coach in history and is now headed to the College Hall of Fame.”

The golden age of textile mills has come and gone, but Lancaster economic development officials attempt to lure new business to replace the once booming textile economy.

Another textile plant has made plans to open in Lancaster as well. 3i has invested $3 million dollars in the 27,000-square-foot Lancaster plant. The company produces indoor and outdoor cushions and pillows. The plant is scheduled to open in March 2017 and is expected to create 100 jobs in the area.

Those who remember Springs Park wish it could be restored, but the county has no plans or the funds to resurrect this place lost in time.