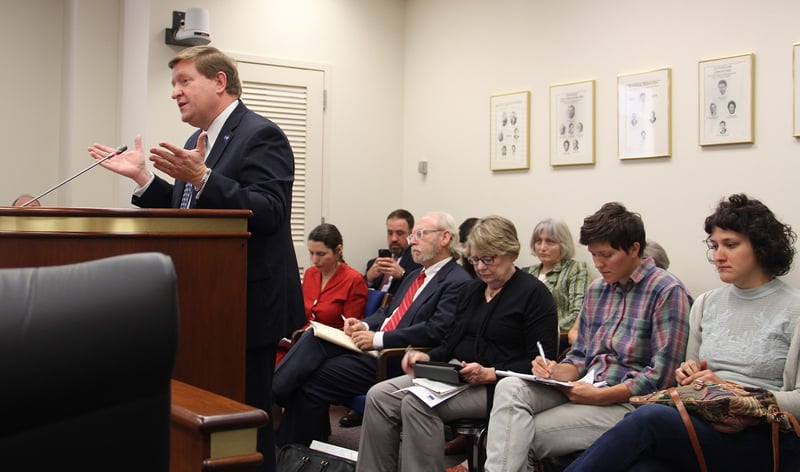 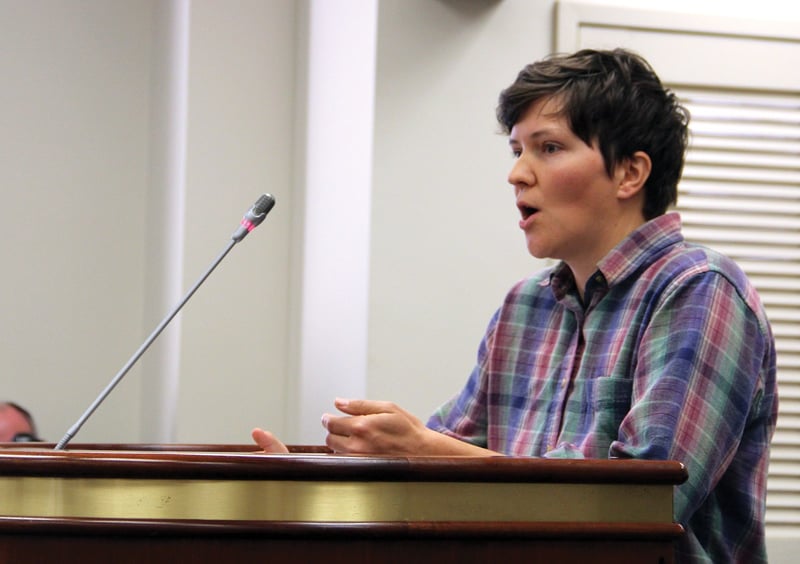 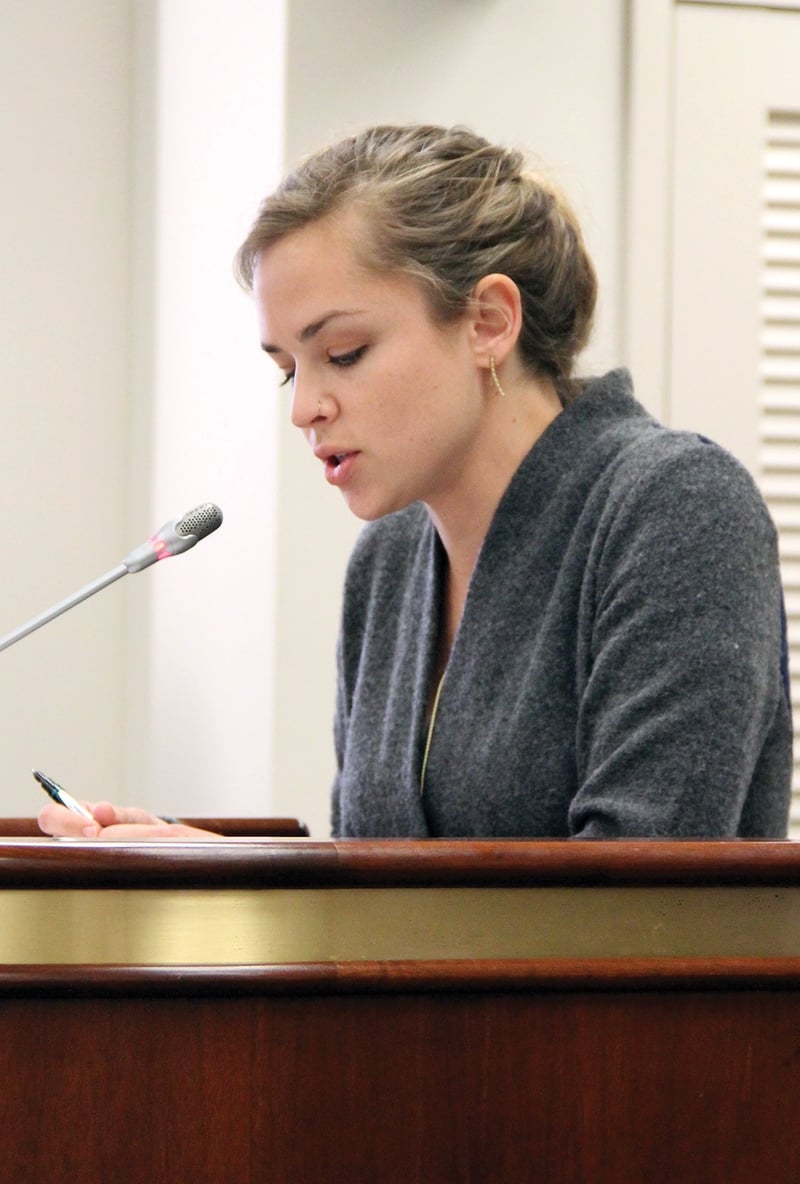 Natalie Olson, staff attorney for the Coastal Conservation League, disputed claims made by supporters of the bill, saying there’s a happy medium between economic progress and environmental protection. 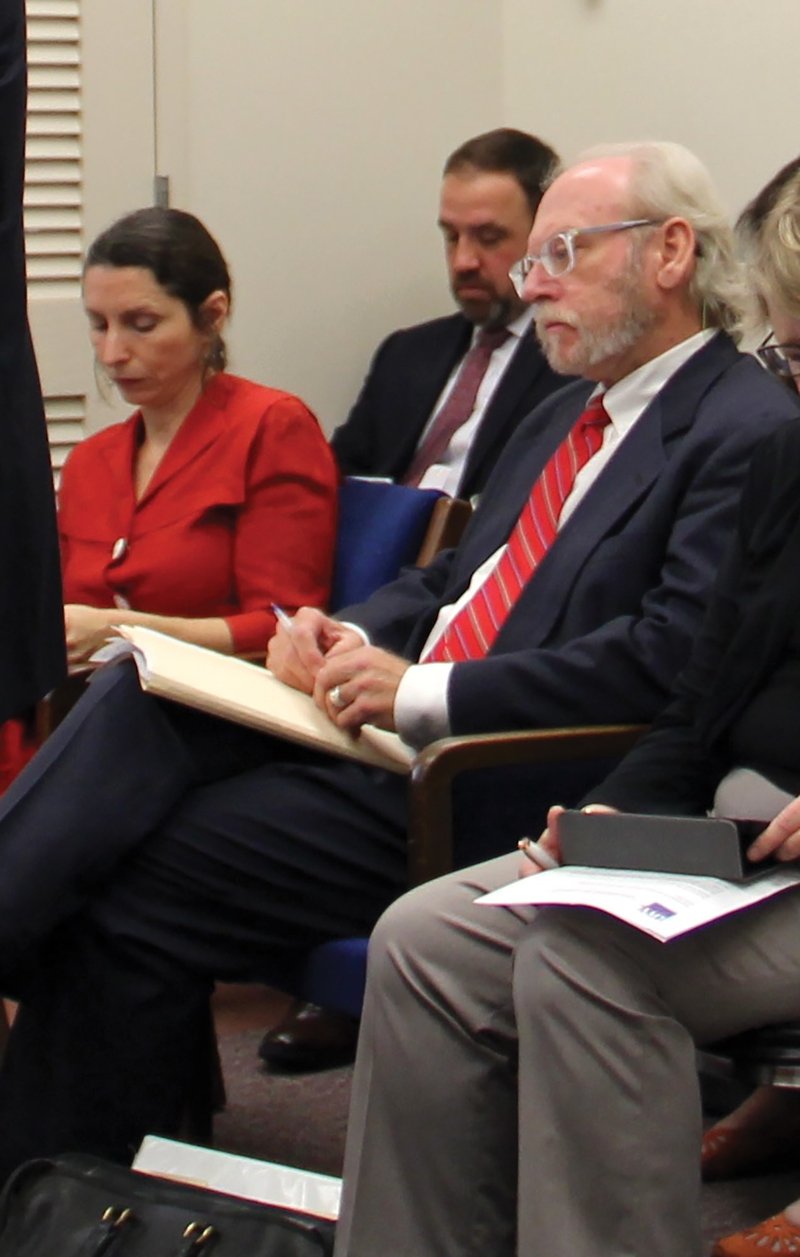 Conservation lawyer Bob Guild awaits his opportunity to address members of the House.

By Collyn Taylor and Joe Crevier

A bill is making its way through the S.C. Legislature that advocates say could expedite business growth, but opponents argue it could have serious consequences on the state’s environment.

The current law puts a halt on environmental projects if a lawsuit is filed against it.  The proposal would allow companies to potentially continue with construction projects even if they face ongoing lawsuits.

Stays occur when a group objects to a particular DHEC permit, essentially halting the permit holder from continuing on a particular project. Currently, the law says stays can be indefinite, allowing a judge to decide on whether the permit is legal before proceeding.

“While that process is going forward, don’t allow that harm to happen, so maintain the status quo. That’s what the stay does,” conservation lawyer Bob Guild said. “This bill would allow the dumping to go forward, the wetlands to be filled, the damage to be done.”

Under the measure,  objectors would have 30 days to provide evidence for their case, and if the case is not proved in the 30 days, a business could move forward. The discovery period, which is the time frame to submit evidence in court, is 90 days.

“We take issue to the indefinite time frame that is created by the automatic stay, and often times the delay that leads to inhibiting good, accessible job creation and slowing down or potential stopping projects that have been approved by state and federal agency,” President and CEO of the Myrtle Beach Area Chamber of Commerce Brad Dean said.

This issue came to a head Wednesday in a House Judiciary Special Laws Subcommittee meeting where both sides presented arguments to state legislators.

Supporters of the bill say shortening stays will cut down on unneeded lawsuits that stunt economic growth and force those filing lawsuits to provide concrete evidence before a stay is granted.

“You now have to have some showing by a challenger, something of merit,” Mount Pleasant lawyer Stan Barnett said in the hearing. “So you won’t have these ludicrous and baseless challenges that are allowed to hold up projects for one year or longer if there is an appeal, which have the effect of killing projects in some cases.”

Supporters of the bill, like Barnett, said they want a “level playing field” to try and grow the economy while groups like the Sierra Club and the Coastal Conservation League, both of which were at the meeting Wednesday, try to prevent what they see as bad DHEC permits.

Blan Holmas, an environmental lawyer from Charleston, argued that passing the new law would strip people of their property rights since they wouldn’t be able to effectively challenge these permits. He also said it would diminish people’s ability to challenge government.

“I think the playing field is level right now, and if you take away the automatic stay, what you do is remove people’s property rights and you put your faith in government always being right,” Holman said. “And where I’m from, that’s not always the case.”

The bill will be debated more, with more discussion on either a 30 or 90-day timeframe instead of an unlimited one. Both bills are currently in committee hearings with votes scheduled later this legislative session.

“This is simply a solution in search of a problem,” Coastal Conservation League representative Natalie Olson said, “and at the same time it’s a massive erosion of citizen’s rights to challenge government decisions.”