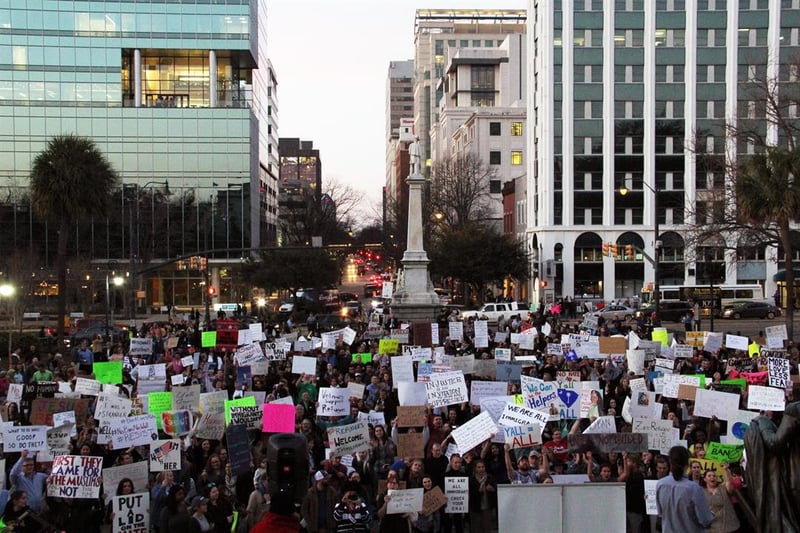 By Joseph Crevier and Danielle Kennedy

Although the order only applies to seven “countries of concern,” it has been perceived as an order against Islam as a whole.

“This is against the values and principles of our forefathers,” Chaudhry Sadiq, president of the Masjid Noor-Ul-Huda Mosque in Columbia, said.

Sadiq, who is also the president of the Columbia-based Peace and Integration Council of North America (PICNA), offered some insight into the Muslim community’s initial reaction.

“We do feel a certain amount of discomfort, unease [and] anxiety,” Sadiq said. “As a community leader, I do understand the reaction and extreme anxiety.”

For Trump, counterterrorism is the reason for the executive order, but for those who are forced to adhere to this order say, it doesn’t make sense.

Lynne Miller, Syrian refugee coordinator at the Islamic Center of Columbia, said the refugees she’s working with are confused.

“Their English is limited and they don’t understand what’s going on,” she said.

The order subjects refugees and immigrants from Syria, Sudan, Somalia, Libya, Yemen, Iraq and Iran, where Islam is the dominant religion, to ‘extreme vetting’ practices.

“Call it what you want, it is about keeping bad people (with bad intention) out of country!” President Trump said via Twitter.

Miller has had no new refugee cases since the ban but has been flooded with concerns from the local community. Emotions are high and mixed on both sides but most of the concerns over the suspension have been from non-Muslim members, according to Miller.

Refugee families, through this program, are sponsored by churches or organizations and operate strictly on donations. Only one church in the Midlands has sponsored a family recently and a total of 49 refugees have settled in South Carolina since 2015, all in the Midlands.

Miller, though she is not a refugee says, “This is an attack on Islam, not on terrorism."